The world’s energy majors are playing an outsized role to reduce carbon emissions, but huge opportunities exist for the independents to build sustainable and substantial portfolios that mesh with their oil and gas skill sets, according to Talos Energy Inc. CEO Timothy Duncan. 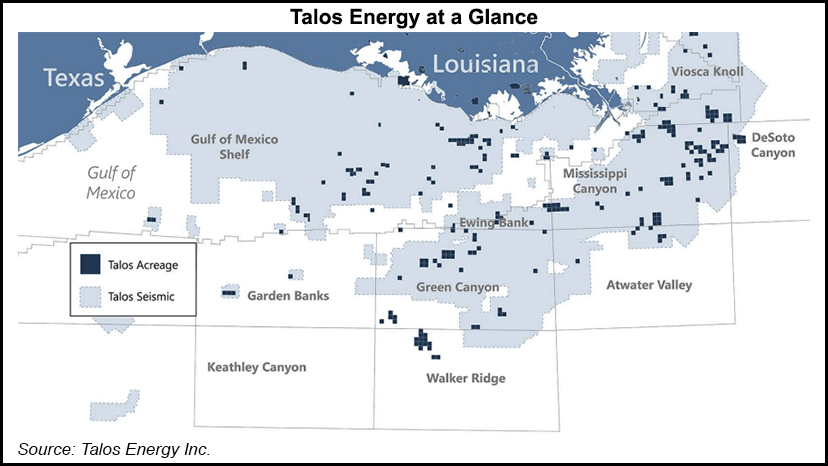 Duncan spoke at the recent Offshore Technology Conference in Houston. The independent he oversees includes a portfolio of Gulf of Mexico (GOM) assets, mostly in U.S. waters, along with leaseholds offshore Mexico.

What will sustain Talos long term is not necessarily its plethora of offshore prospects but rather “responsible oil and gas development,” Duncan said at the recent Offshore Technology Conference (OTC) in Houston. “Building out a responsible oil and gas business and pairing that with a low-carbon initiative is the right way for an oil and gas company to think about its future, particularly offshore and along the Gulf Coast.

“If you do nothing, the market will pass you by.”

Talos has found its niche beyond oil and gas development in carbon capture and storage (CCS). On Wednesday, its partnership with Carbonvert Inc. was the sole winning bidder in a Texas General land Office (GLO) sale for a CCS site. The site in Jefferson County east of Houston could serve to capture emissions from the massive petrochemical complex on the Houston Ship Channel near Beaumont and Port Arthur.

The total area in the bid is for more than 40,000 gross acres in shallow state waters. Based on preliminary estimates by Talos of the rock and fluid properties of the saline reservoirs, the project could ultimately sequester 225-275 million metric tons of carbon dioxide.

Once the GLO agreement is finalized, Houston-based Talos, as the operator, could rank among a select group of domestic independents with a physical project dedicated to CCS.

“This is the first of several steps in our strategy to build multiple carbon capture and storage sites along the U.S. Gulf Coast, where we can use Talos’ core competencies to operate these important projects,” Duncan said.

Talos is aiming to “redefine the role of traditional oil and gas companies,” Duncan said. The management team recognizes “the need to responsibly develop and produce hydrocarbons as well as lowering overall emissions in the communities where we work and live.”

The next step is to negotiate the lease agreement with GLO staff. Final terms would be subject to approval by the Texas School Land Board.

The venture with Carbonvert predates another big carbon capture partnership announced by Talos in June. In a joint venture (JV) with UK-based Storegga Geotechnologies Ltd., also a CCS specialist, the partners plan to “source, evaluate and develop” opportunities also on the Gulf Coast, and offshore Alabama, Louisiana, Mississippi and Texas.

The idea is to “marry these onshore emissions sources with these seabed geologies,” Duncan told the OTC audience.

The shallow waters could be a haven for CCS projects because of the dry holes drilled years ago, he noted.

For Talos and Storegga, the plan is also to find 40,000-50,000 acres of “wide open spaces” that would be suitable for CCS in shallow or inland waters.

“There’s no reason for us to leave this to the majors,” Duncan said. “We have the experience and the assets in shallow water.”

Talos is not alone in scouring the Gulf Coast for CCS opportunities.

ExxonMobil in April said it was looking for Texas and federal support to build a $100 billion project to capture emissions from petrochemical companies on the Houston Ship Channel. As envisioned, the emissions also would be buried in the GOM.

During the recent second quarter earnings call, Duncan spent a few minutes discussing how Talos has taken a “grassroots approach” to environmental, social and governance initiatives. About a year ago management began “looking at more ways to get involved in our communities,” he said. That led to “reviewing where we could apply the same core skill sets that have made us a successful oil and gas company into the evolving low carbon economy and energy solution space.”

The conclusions were that Talos could best leverage the company’s abilities in CCS.

“For Talos, offshore CCS is a natural extension of our existing skill set, an excellent way for us to leverage our core competencies and add diversity of energy solutions and eventually add important scale to our business,” Duncan told investors during the conference call.

“The region contains a significant concentration of the United States, industrial and petrochemical activity, yet is almost immediately adjacent to one of the largest potential storage provinces in the country…”

Many of the functions that Talos employees handle daily in the hydrocarbon business “are directly applicable to the Gulf Coast in offshore carbon capture,” said the CEO. “So, we see this as a way to take the skills and corporate knowledge we have in-house and add a new element to our business.”