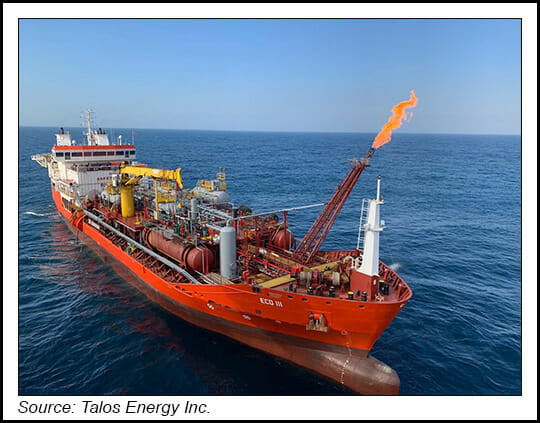 Zama was discovered by a Talos-led consortium at shallow-water Block 7 in 2017, but the reservoir extends into a neighboring Pemex tract.

A third-party reservoir engineering firm engaged by the Block 7 consortium and Pemex to evaluate the initial tract participation (ITP) of Zama recently concluded that the consortium holds 49.6% of the gross interest in Zama and Pemex holds 50.4%.

This contradicts an earlier finding by Netherland, Sewell & Associates Inc. that Talos and its partners hold a 59.6% gross interest in Zama, with Pemex holding the remaining 40.4%.

The Block 7 consortium and Pemex have been negotiating the terms of a unitization and unit operating agreement (UUOA) since energy ministry Sener officially determined in early 2020 that Zama was a shared field.

The consortium and Pemex were unable to propose a UUOA to Sener within the established timeframe. As a result, Sener is now required to propose finalized terms of an agreement based on international best practices and considering input from the parties.

Talos noted on Friday that the most recent evaluation is not necessarily final.

“The UUOA will separately provide for specific milestones upon which participating interest splits among the Zama parties will be redetermined and adjusted based on evolving data collected over the asset lifecycle,” Talos said. “Redetermination provisions are standard in unitizations and ensure equitable participation over time.

“Under the redetermination provisions in the Zama UUOA, Block 7 partners and Pemex will reevaluate the ITP and subsequently determined splits in line with international best practices.”

Zama contains an estimated 670 million boe of 2C gross recoverable resources, and was named “Discovery of the Year” for 2017 by the Association of International Petroleum Negotiators.

Duncan said that regardless of the working interest split determined by Sener in the final unitization agreement, “we expect that the true percentages will ultimately be realized through the redetermination process, which is a standard component of any unitization agreement and a global best practice, among other factors.”

He added, “ITP percentages are a single variable among those still being determined, most importantly operatorship.

“We remain confident that Talos is best positioned to operate the field moving forward and we will further update the market once a commercial agreement on the unitization has been reached.”

E&P contracts awarded under the reform between 2015 and 2018 have so far resulted in $7.38 billion of direct investment as of April 2021, according to a new report by upstream regulator Comisión Nacional de Hidrocarburos (CNH). Talos has accounted for $282 million of the total.

Among private sector companies, Italy’s Eni SpA has invested the most at $1.78 billion.

In mid-2019, Eni became the first private sector operator to record offshore oil production in Mexico at its Area 1 project.