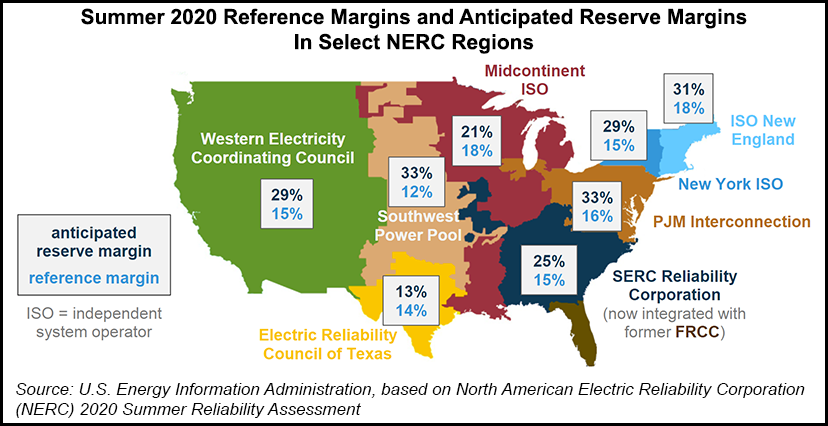 The North American Electric Reliability Corp.’s (NERC) 2020 Summer Reliability Assessment found that there are enough resources available to meet this summer’s current projected peak electricity demand in almost all of the Lower 48.

Released last month, the NERC report also features a special assessment tied to the coronavirus pandemic. In a typical year, NERC publishes a reliability assessment at the beginning of each summer compiling anticipated electricity demand and supply changes and emphasizing any regional challenges or expected conditions that could impact the bulk power system. This year’s report includes a special April assessment that gauges unique issues in the midst of the pandemic.

Among the findings: The Electric Reliability Council of Texas (ERCOT) exhibits the smallest anticipated reserve margin; however, each of the remaining regions exceeds at least a 20% anticipated reserve margin. According to the NERC report, ERCOT’s anticipated margin increased from 8.5% last summer to 12.9% for this summer because of an addition of more than 1.9 gigawatts (GW) of on-peak resource capacity. Additionally, ERCOT’s summer assessment assumes the ability to import up to 817 megawatts (MW) from its neighbor to the north, the Southwest Power Pool (SPP). That said, ERCOT’s reserve margin is almost equal to the region’s 14% reference margin.

In a Today In Energy note on Tuesday, the Energy Information Administration (EIA) took a look at NERC’s Summer Reliability Assessment. The government agency said a reserve margin takes into account the amount of resources anticipated to be available to meet net internal electricity demand. A reserve margin of 15% means that 15% of a region’s electric generating capacity would be available as a buffer to supply unexpected changes in the summer’s peak hourly load.

Otherwise, ERCOT’s relatively small anticipated reserve margin is typical, as it may have little unused electric generating capacity during peak electric load times. Earlier this year, ERCOT planners were predicting relatively tight operating conditions, such as those faced last summer. As for the impact of Covid-19, ERCOT’s assessment shows it caused no delays for projects that were scheduled to come online prior to this summer.

One key finding by NERC is that because stay-at-home orders resulted in many areas of the country experiencing reduced electricity demand and altered electricity consumption patterns, some owners and operators of power plants or other electric system infrastructure decided to defer or cancel maintenance that would typically be done before summer.

Many typical efforts made to prepare for summer peak operating season, such as supply stocking and preventive maintenance, have been affected by the coronavirus pandemic.

Nonetheless, late-summer wildfire season in the western United States and Canada poses an above-normal risk to bulk power system (BPS) reliability, NERC noted. BPS operations could be impacted in active wildfire areas, as well as areas where there is heightened risk of wildfires because of weather and ground conditions. Additionally, the California Independent System Operator (CAISO), which covers most of the state, could witness less available energy from hydro resources throughout the summer. California and the Pacific Northwest frequently export electricity to CAISO, but are currently experiencing below-normal hydro conditions.