Residential electricity sales in the United States surged to a record high in April, while cratering in the commercial and industrial sectors, a result of measures taken to reduce the spread of Covid-19, according to the Energy Information Administration (EIA). 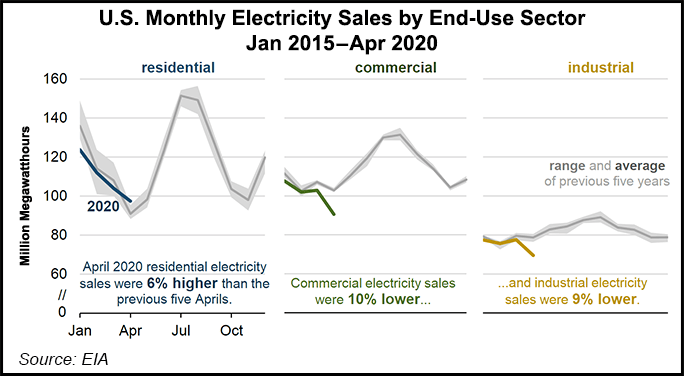 Total electricity sales in the United States declined 4% in April compared with the same period in 2019, according to EIA data.

EIA has forecast U.S. electricity demand between June and August to total 998 billion kilowatt hours (kWh), a 5% decline compared with the same period last year and the lowest level of summer electricity consumption the country has experienced since 2019. Most of that decline will come through the commercial and industrial sectors, EIA said.

PJM Interconnection, the largest U.S. electric grid operator, said recently it is prepared for peak demand this summer, and the New York grid operator also sees adequate generation for the hot months ahead.

The Electricity Reliability Council of Texas (ERCOT), which is forecasting record power use this summer, warned that it may need to declare some Energy Emergency Alerts.