With winter 2014-2015 right around the corner, many in the natural gas market seem relatively comfortable with their fourth quarter price expectations now that worries about insufficient winter supply have been mostly assuaged by an exceedingly strong storage injection season. Looking to get a handle on how 2015 might play out, there is no shortage of factors at play. 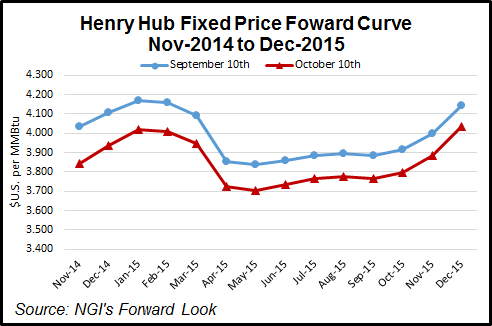 At the beginning of September, NGI’s Forward Look noted that expectations of 2015 pricing seemed to be falling like the leaves in autumn as concerns this past spring that the industry would not be able to refill storage ahead of the 2014-2015 winter had largely dissipated (see NGI’s Forward Look, Sept. 10).

After a bitterly cold 2013-2014 winter with a number of polar vortices that pushed working gas in storage to a low of 822 Bcf at the end of March 2014, a level that had not been seen since the spring of 2003, analysts and market watchers were preparing for the worst heading into this winter. However, a stout injection season is erasing the storage deficit at a rapid pace. Following Thursday’s report from the Energy Information Administration (EIA) for the week ending Oct. 3, inventories sit at 3,205 Bcf, just 359 Bcf lower than last year at this time and 378 Bcf below the five-year average.

In September, the EIA Short-Term Energy Outlook (STEO) lowered its forecasted price of natural gas in 2015 by 13 cents to $3.87/MMBtu. That came just one day after analysts with Raymond James & Associates adjusted natural gas prices lower for the fourth quarter, for 2015 and the longer term (see Daily GPI, Sept. 8). Analysts at Sterne Agee also released a downward revision to their 4Q2014 price deck dropping the price to $4.15/Mcf from $4.65 (see Daily GPI, Sept. 5). Their 2015 forecast was reduced to $4.35 from $4.50, making them the most optimistic of the three groups.

Fast forward to today, and things don’t appear to be getting better for folks looking to sell gas in 2015; in fact they’re getting worse, according to NGI Markets Analyst Nathan Harrison.

“While the forward basis market was placing the average price of 2015 gas at $3.974/MMBtu on Sept. 10, this has since fallen a full 12.7 cents to just $3.847 as of NGI’s Forward Look issued Oct. 10,” he said. “One reason for this might be that forward market participants have priced in another rendition of the EIA’s STEO, which came out on Oct. 7.”

The EIA’s October edition showed another downward revision to 2015 pricing, with a 3-cent reduction from September’s STEO to $3.84/MMBtu (see Daily GPI, Oct. 7). This drop in price comes even as the EIA anticipates consumption of natural gas from the power sector rising from a 2014 expected average of 21.8 Bcf/d to 22.6 Bcf/d; an increase of 3.7% year-over-year.

In some areas this increase in power sector demand may be even higher. The 41-year-old Vermont Yankee nuclear plant is expected to retire prematurely in December (see Daily GPI, Aug. 28, 2013). BNP Paribas’ Teri Viswanath, director of commodity strategy for natural gas, believes that this pending shutdown is part of a trend. Last week she remarked, “The pending shutdown of the 41-year-old nuclear plant is part of an ongoing cycle of premature plant retirements in the U.S., a trend that arguably began in 2012 and will likely peak next year, prompted by new environmental regulations and fuel competition from low-priced natural gas. Indeed, between now and the end of 2015, more than 20 GWs of power plant capacity is slated for retirement.”

Viswanath estimated that the retiring plants will contribute a 1.75 Bcf/d year-on-year increase in electric power demand in 2015.

“Our expectation that 2015 will inaugurate the first of several years of structural demand growth for natural gas would seem to suggest higher prices ahead,” she said. “However, as we warned in August, a deluge of midstream transport projects is expected to accelerate production growth over the winter, effectively hindering the prospects for short-term price recovery.”

While natural gas prices in the one- to two-year term may be painful to some, such a situation may be bullish for prices in the longer term. “Sustained low pricing may further drive out competition from coal and nuclear, and as prices sink lower, it may be a question of who can hold their breath the longest,” Harrison said.