U.S. oil inventories increased for a third-consecutive week as demand for travel fuels remained light and as refinery activity, while increasing, held far below capacity following the blast of winter weather that froze the Texas energy grid in February. 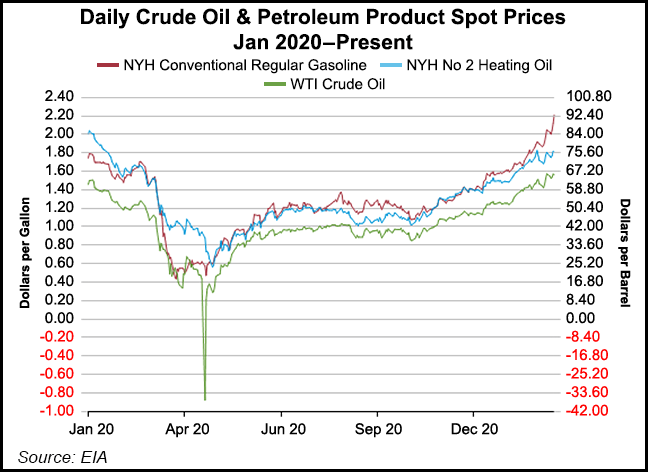 Domestic commercial crude inventories for the week ended March 12 — excluding those in the Strategic Petroleum Reserve — increased by 2.4 million bbl from the previous week, the U.S. Energy Information Administration (EIA) said Wednesday in its Weekly Petroleum Status Report (WPSR). At 500.8 million bbl, inventories are 6% above the five-year average.

The WSPR showed that total petroleum demand increased 1% week/week but remained 12% below year-earlier levels, with jet fuel consumption down 42% year/year and gasoline off 13%. The decline in travel fuels reflects a year-long trend caused by restrictions imposed to thwart the coronavirus pandemic.

Total demand over the last four-week period averaged 18.8 million b/d, down 11% from the same period in 2019, EIA said. During that span, motor gasoline demand was down 13% from a year earlier, while consumption of jet fuel fell 36%.

EIA said crude oil refinery inputs averaged 13.4 million b/d last week. That represented a 1.1 million b/d gain from the prior week’s average. However, refineries operated at 76% of their operable capacity last week, down from 86% a year earlier.

U.S. crude production, meanwhile, averaged 10.9 million b/d, on par with the prior week but 2.2 million b/d below the year-earlier level.

In a separate report Wednesday, the International Energy Agency (IEA) said global oil markets have in 2021 rebounded from the depths of the pandemic last year “but still face a high degree of uncertainty.”

The Paris-based agency, in its latest annual mid-range outlook, said oil demand would rise to 104 million b/d by 2026, up 4% from 2019, boosted by ongoing consumption increases in heavily populated Asia. The agency compared its base case estimate to 2019 rather than last year due to anomalies imposed by the pandemic.

“The Covid-19 crisis caused a historic decline in global oil demand – but not necessarily a lasting one,” IEA researchers said.

That noted, the recovery is ongoing and gradual – and changes in policy could lead to substantial revisions to the forecast.

Global oil demand will not reach pre-pandemic levels of 100 million b/d until 2023, IEA forecasted. It added that demand for gasoline and jet fuels may never return to the peaks reached in 2019. The agency cited a combination of fuel efficiency advances, changes to electric vehicles hastened by government regulations to combat climate change, and potentially lasting declines in business travel due to the rise of video meetings over the past year.

Should government regulations accelerate and elevated levels of teleworking arrangements imposed by the coronavirus become permanent, that could reduce oil use by as much as 5.6 million b/d by 2026. That “would mean that global oil demand never gets back to where it was before the pandemic,” IEA said.

On the supply side, IEA expects “only a marginal rise in global upstream investment” in 2021 “after operators spent one-third less in 2020 than planned at the start of the year.”

To meet the growth in oil demand in IEA’s base case, supply needs to rise by 10 million b/d by 2026.

“The Middle East, led by Saudi Arabia, is expected to provide half that increase, largely from existing shut-in capacity,” the agency said. “The region’s expanding market share would mark a dramatic shift from recent years when the United States dominated growth.”

Based on current government policies, “U.S. supply growth is set to resume as investment and activity levels pick up, yet any increase is unlikely to match the lofty levels seen in recent years,” researcher said.