With the scorching temperatures the South Central United States is used to seeing in the summer finally starting to build, and production lagging recent highs, August natural gas forward prices soared 32.0 cents on average during the trading period ending July 21, according to NGI’s Forward Look. 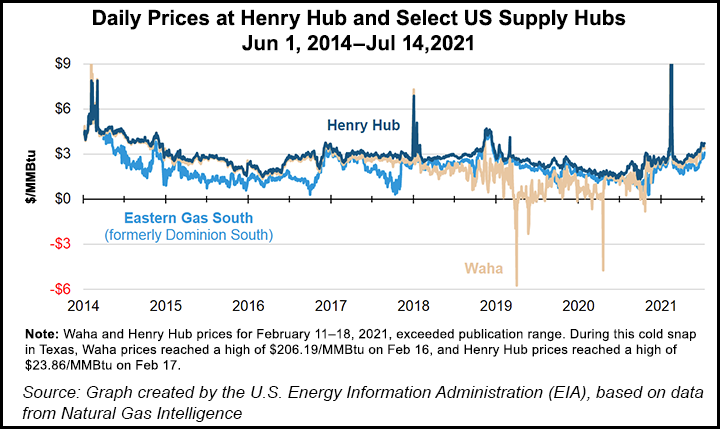 Price gains were just as impressive for the winter strip (November 2021-March 2022) as the lack of producers’ response to the higher price environment could leave storage inventories ahead of winter at insufficient levels. Absent an increase in drilling activity by public exploration & production (E&P) companies, strong winter demand in the United States and overseas could propel prices to levels not seen in years.

Looking longer term, Halliburton sees itself “in the early innings of a multi-year upcycle,” according to Miller.

“We expect drilling and completion spending in North America will…grow double digits annually over the next two years, although activity will not return to pre-pandemic levels,” the CEO said. “We expect private operators to opportunistically lead the activity comeback,” while public exploration and production companies will look to “balance growth and returns.”

The stagnation of natural gas production has helped lift summer prices to their highest levels in more than five years, according to the Energy Information Administration (EIA). Citing NGI price data, the EIA said June Henry Hub prices averaged $3.26/MMBtu, the highest price of any summer month (April-October) since 2014.

“Spot prices for July 14 in every one of the more than 175 pricing hubs tracked by Natural Gas Intelligence exceeded $3.00/MMBtu,” EIA researchers said. “These hubs include supply hubs that have traditionally traded at notable discounts to the Henry Hub, such as the Eastern Gas South hub (formerly known as Dominion South), located near production activities in the Appalachia Basin, and the Waha hub, located near production activities in the Permian Basin.”

Forward prices reflect ongoing strength for those hubs through next year. For example, Eastern Gas South prices for the upcoming winter climbed 26.0 cents for the trading period between July 15 and 21, averaging $3.300, according to Forward Look. The summer 2022 strip was up 8.0 cents to $2.190.

Henry Hub prices, meanwhile, rose similarly and hit $4.01 for the winter. Prices for next summer (April-October) jumped 13.0 cents to average $3.12.

The EIA said natural gas exports — both those sent by pipeline and as liquefied natural gas — have reduced the supply available for domestic consumption. It’s also been unusually hot, with June setting a record for the hottest June ever in the United States.

Drought conditions in the western United States, in particular, have contributed to increased natural gas-fired generation to offset decreased hydroelectric generation, according to EIA.

Looking ahead, EBW Analytics Group said with the recent large addition to projected cooling demand in the one- to 15-day forecast, national cooling demand could reach as high as 13.9 cooling degree days by next Wednesday. Furthermore, above-average temperatures are forecast to cover much of the Southeast and, by early August, much of Texas. This would exert a “particularly bullish” impact on power sector gas demand.

EBW said the current wind outlook for Texas is low, amplifying the demand impact of hotter temperatures and higher loads. “Natural gas consumed for power generation could average 39.8 Bcf/d for the last week in July, 1.0 Bcf/d higher than the prior summer high during the last week of June.”

The tighter supply/demand balances have left their mark on storage.

The EIA said less-than-average natural gas has been injected into working storage in the United States this summer. Working gas in storage began the injection season (April 1-Oct. 31) at 1,784 Bcf, only 24 Bcf less than the five-year average.

On Thursday, however, EIA reported that inventories had risen to only 2,678 Bcf, which is 532 Bcf below year-ago levels and 176 Bcf below the five-year average.

The 49 Bcf injection for the week ending July 16 was on the higher end of market expectations, but confirmed that strong demand was continuing in the South Central and Pacific regions. Both reported withdrawals in the reference week.

Broken down by region, Midwest inventories increased by 21 Bcf and East stocks by 19 Bcf, according to EIA. The South Central region climbed by a net 7 Bcf, but this included a 4 Bcf draw from salt facilities. The Pacific pulled 3 Bcf out of storage.

Thursday’s storage injection sucked some steam out of the recent price rally, at least momentarily. Bespoke Weather Services noted that the 49 Bcf figure was “not as tight as we were modeling.” However, it was not enough to alter the narrative either. “We still, using these balances, project end-of-season storage levels under 3.5 Tcf, which is not bearish,” the firm said.

NatGasWeather noted how increasingly intertwined the U.S. and global gas markets have become. In a mid-Thursday note to clients, the firm said that August Nymex futures tested $3.95-$3.96 more than 10 times over the past 36 hours. Each time, the prompt-month contract was rejected before bulls were finally able to break through it during Thursday’s session.

The hike was all the more interesting because it occurred after the latest round of storage data showed that storage deficits actually improved a bit week/week.

“Strength in global gas markets have been carrying over to U.S. markets in recent months and that again appears to be the primary driver of Thursday’s gains when considering U.S. deficits will improve by another 15-20 Bcf off next week’s EIA storage report due to limited heat east of the Plains this past week,” NatGasWeather said.

Deficits are then expected to increase back to around 175 Bcf after next week’s heat is accounted for, according to the firm. For now, bears may be perplexed why U.S. prices are so strong when the past numerous years deficits near 175 Bcf couldn’t justify anything close to $3 gas.

“This highlights how tight global gas supplies in Asia and Europe are leading U.S. markets when in the past five to 10 years, the U.S. was the primary leader of global prices,” NatGasWeather said. “Essentially, the natural gas markets are saying times have changed and $4 might be the new $3.”