Statoil ASA, which has for seven years built a portfolio of prospects in the Chukchi Sea, said Tuesday it would exit Alaska following poor exploration results at a neighboring lease held by Royal Dutch Shell plc.

Statoil has worked since 2008 “to progress our options in Alaska,” said Executive Vice President of Exploration Tim Dodson. “Solid work has been carried out, but given the current outlook we could not support continued efforts to mature these opportunities.”

The only operator that has drilled any wells in the region since 2008 is Shell. In September, following years of effort and billions of dollars, Shell suspended its Alaska offshore drilling plans citing poor results from an exploratory well in Chukchi (see Daily GPI, Sept. 28). ConocoPhillips has never drilled an exploration well; in 2013 the Houston-based operator scuttled its inaugural Chukchi exploration in the Devils Paw prospect, citing federal regulatory requirements and operational permitting standards (see Daily GPI, April 11, 2013). Last year ConocoPhillips and Statoil put their offshore Arctic venture on hold.

“Our plans for the Chukchi Sea were on hold prior to Statoil’s announcement and they remain on hold,” ConocoPhillips Alaska spokeswoman Natalie M. Lowman told NGI.

A bid by Shell to extend leases in the Beaufort and Chukchi seas beyond 2020 was rejected last month by Interior (see Daily GPI, Oct. 19). Statoil’s leases, as well as ConocoPhillips leases obtained in the 2008 sale, also expire in 2020.

Statoil is “optimizing its portfolio, strengthening financial performance and positioning for long-term value. The leases in the Chukchi Sea are no longer considered competitive within Statoil’s global portfolio, so the decision has been made to exit the leases and close the office in Anchorage, AK,” the company said.

Studies, research and activities that have been undertaken by Statoil in Alaska have given the company “significant skills and expertise that can be leveraged in other opportunities in northern environments in the future,” management said.

“Our understanding of the challenges and opportunities has increased considerably over the last years,” Dodson said. “This gives Statoil a unique position and experience which the company will continue to apply going forward.”

U.S. Arctic waters are estimated to contain 27 billion bbl of oil and 132 Tcf of natural gas, with most of the prize concentrated in the Chukchi.

Alaska Republican Sen. Lisa Murkowski said she was “very concerned that, for the second time in as many months, a major company has decided to walk away from Alaska because of the uncertainty surrounding our federal government’s support for Arctic development.

“Low oil prices may have contributed to Statoil’s decision, but the real project killer was this administration’s refusal to grant lease extensions; its imposition of a complicated, drawn-out, and ever-changing regulatory process; and its cancellation of future lease sales that have stifled energy production in Alaska.” 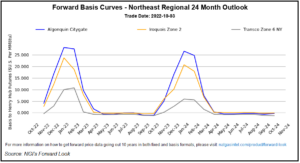 Natural gas futures rallied on Tuesday, with overall thin liquidity resulting in a likely overdone response to a temporary decline in production. Despite an unsupportive near-term outlook, the November Nymex gas futures contract jumped 36.7 cents to $6.837/MMBtu. December futures climbed 37.1 cents to $7.174. Spot gas prices rose almost across the board, outside of…