As heat indexes surged above 100 degrees across the United States to close out July, natural gas forward prices rallied during the July 23-29 period, according to NGI’s Forward Look. Prices for next winter and beyond posted the largest gains, as the prospect of improving export demand and lower gas production in the months ahead weighed on the market. 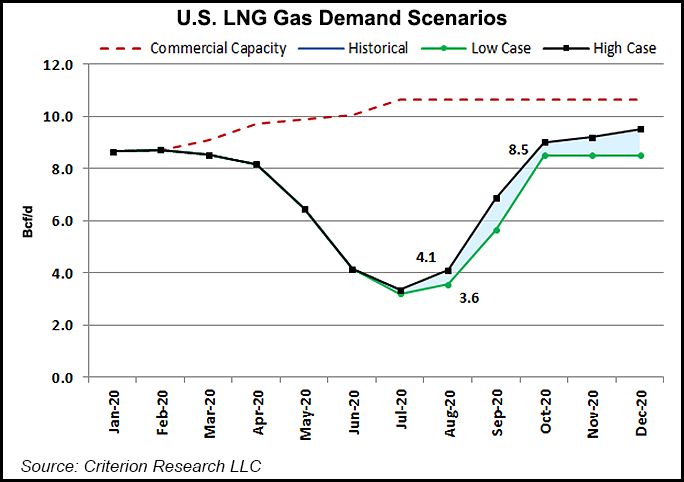 The “principal bullish thesis” appears to be a seasonal tightening of spreads as the storage trajectory may not justify the tremendous discount for 2020 contracts, particularly with liquefied natural gas (LNG) anticipated to begin rebounding in the fall, according to EBW Analytics Group. While the odds are in favor of this thesis proving accurate in the medium to longer term, “it is by no means new,” the firm said.

The earliest confirmation of rising LNG is unlikely until at least late August or, more likely, mid-September, according to EBW. However, some indications already have pointed to a decline in U.S. LNG cargo cancellations for September, which may signal the worst of LNG demand destruction is in the rearview mirror.

On The Desk’s energy chat room, Enelyst, Criterion Research analyst James Bevan said rumored cargo cancellations were down to less than 30 for September, which compares to more than 50 in July and around 45 in August. Criterion’s low-case LNG demand scenario shows feed gas volumes nearing 6.0 Bcf/d in September and then moving above 8.0 Bcf/d by October, a level at which demand is expected to remain for the rest of 2020. On Friday, NGI’s LNG Export Tracker showed feed gas volumes at around 3.4 Bcf/d.

In the interim, however, EBW said weakening physical dynamics may propel spot prices downward and tow Nymex futures down along with them. That’s largely because the sweltering conditions currently baking the Lower 48 are set to subside in the next few days. Weather models have grown increasingly cooler over the past week, with the latest model runs showing a return to more seasonal levels in the days ahead.

The track of Hurricane Isaias also is key, as there could be some impact along the East Coast in a few days. However, with the storm’s trajectory away from core Gulf of Mexico production, the weather system would likely result in more demand destruction for the region.

Genscape Inc. analyst Joseph Bernardi said pipeline and other data indicated reduced flows and at least one fractionator at the Lone Star facility offline. “It’s very likely gas is getting constrained because they can’t move the NGLs to their storage facility and therefore can’t process any gas.”

The National Weather Service was forecasting highs in the 90s through Saturday, and SoCalGas was projecting demand to remain in the 2.5-2.6 Bcf/d range over that time. SoCalGas is currently conducting some maintenance reducing import capacity through its Southern Zone, but this work should remain unimpactful relative to recent flows, Bernardi said.

Aliso Canyon is currently limited to a maximum working inventory of 34 Bcf, compared to 86 Bcf before a leak was detected in October 2015, and it can only be used for withdrawals under certain conditions.

The potential for lower associated gas production and stronger demand nearing the winter months boded well for the rest of the Waha forward curve. September prices were up 6.0 cents from July 23-29 to reach $1.527, while winter prices jumped 15.0 cents to $2.460, according to Forward Look. The summer 2021 strip was up 11.0 cents to $2.20.