Spectra Energy has been busy building out infrastructure in the Northeast, where capacity is needed to get Marcellus and Utica gas to market. However, the Southeast and Gulf Coast regions are ripe for billions of dollars of investment as well, said Spectra’s Bill Yardley, president of the U.S. transmission and storage business. 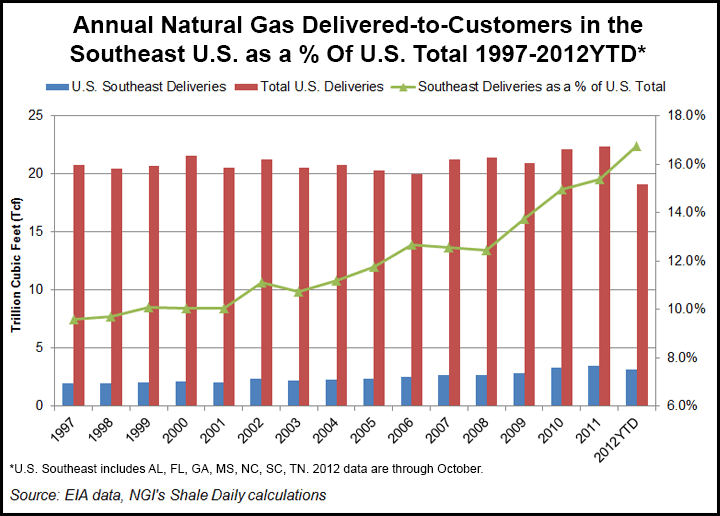 While Spectra is working on “an extraordinary suite of Northeast projects” worth more than $4 billion between now and 2016, “now we’re seeing the next phase of growth in the South as well,” Yardley told financial analysts during a presentation Wednesday.

“While we’ve been investing heavily and signing contracts in the Northeast and the Southeast U.S., there’s been an awakening happening in the Gulf,” Yardley said. “The Gulf is undergoing a welcome growth in industry that relies on ample supplies of natural gas.

“This demand growth is going to be driven by multiple market segments, both domestic and abroad, including LNG [liquefied natural gas] exports, GTL or gas-to-liquids facilities, power generation, industrials and the petrochemical resurgence and exports to Mexico. We see this as a 10 Bcf/d demand potential, and it’s going to need supply from a variety of sources. The Gulf Coast and Midcontinent shales, yes, but most likely, the Appalachian shales as well.”

Spectra has seen a 29% increase in gas deliveries to customers in the Gulf region as demand for gas from power generators, industrials and others has surged, Yardley said. “For those questioning the value of our Gulf system in the wake of evolving shale plays across North America, this should help you understand why we’re confident that we’re not only going to retain value here, but we’re going to grow this region.”

Meanwhile, Spectra achieved a contract renewal rate last year of about 98% on its Texas Eastern and Algonquin systems, representing more than $400 million of annual firm revenue from the pipelines running from the Gulf of Mexico to New England.

“The vast majority of our capacity is sold out under reservation charges, and it has been for years,” Yardley said. “This is especially true of our Texas Eastern and Algonquin pipelines to the Northeast and our SESH [Southeast Supply Header], Gulfstream and East Tennessee systems to the Southeast.

“Not only are [customers] paying for this [capacity], but they’re using it…If customers are paying for something but not using it, it’s only a matter of time before they give us back that contract.”

In the Southeast, the company is expecting 4 Bcf/d of incremental demand growth from gas-fired power generators over the next few years. Florida alone is expecting 1.4 Bcf/d of fuel conversions by the end of the decade, Yardley said.

“Florida continues to be a leader in new natural gas-fired generation, and its natural gas consumption is second only to Texas,” he said. “This continued commitment to natural gas is underscored by Florida Power & Light Co.’s December issuance of a request for proposal to build a third major natural gas pipeline into Florida by 2017. The responses are due in April. We are ideally positioned to compete for this business, and we expect to deliver contracts in the third quarter of this year.”

Yardley said Spectra also plans to have its Renaissance Project “papered up” by midsummer. It’s a new lateral to link gas moving on Texas Eastern to power generation and local distribution company markets in Georgia, Alabama and Tennessee. “Renaissance is slated to come into service during the second half of 2016, in time to serve about 1.8 Bcf/d of coal conversions and incremental growth,” he said, adding that firm agreements with shippers are expected soon.

Spectra is seeing “concrete signs of progress” on the LNG export front in the Gulf Coast, where 14 projects are vying for export authorizations and markets. “Not all export facilities will be built, but we’re going to find a way to take advantage of our location and our service offerings to generate growth capital investments for the multitude of global LNG market participants in this region,” he said.

Yardley also said demand growth should come from GTL projects, such as one planned by Sasol (see Shale Daily, Dec. 4, 2012). GTL facilities could add 3 Bcf/d of demand to the Gulf Coast region during the 2016-2019 period, he said. “And we’re seeing highly favorable signs of an industrial and petrochemical renaissance in the Gulf region, with a slate of facilities announced and progressing totaling almost 2 Bcf/d of demand.”

One area where the demand story has not been robust of late is at gas storage facilities in the Gulf Coast. With its Market Hub Partners and Bobcat Gas Storage facilities, Spectra is a “market leader” in Gulf Coast salt cavern storage, Yardley said. However, he allowed that the value of storage in the region has been declining over the last two years. “Our team is working very hard to create services to regain that value,” he said. “We feel that with our advantageous footprint and the expanding use of gas in the Gulf, we really do have the opportunity to do just that.”

Back in the Northeast, two of Spectra’s five projects are under way, and the other three are slated to begin.

The company’s New York-New Jersey expansion, when complete during the fourth quarter, will add 800 MMcf/d of capacity to the region and provide residents of the two states with a combined $700 million in annual energy savings, Yardley said. Spectra’s Team 2014 project is another expansion of the Texas Eastern mainline; it’s designed to get Marcellus gas to the Northeast, Mid-Atlantic, Midwest and Southeast markets. The project is fully subscribed by Chevron and EQT and due to enter service during the second half of 2014, Yardley said.

Open (Ohio Pipeline Energy Network) would connect Utica Shale production to Texas Eastern markets. “For Utica to really be a factor, more pipeline capacity must be built, and we expect to finalize open agreements within the next months and go into service in the second half of 2015,” Yardley said.

The Aim (Algonquin Incremental Market) project is a supply push and demand pull project, Yardley said, and is expected to come online during the second half of 2016. “The oil-to-gas conversion growth at local distribution companies in Connecticut, Rhode island, and Massachusetts, along with increasing gas-fired power generation, fuel the demand for this project,” he said.

And the Nexus project would provide gas supply diversification to markets in Ohio, Michigan, Ontario and Quebec by connecting Utica and Marcellus producers directly to the Dawn Hub in Ontario. “The Utica and Marcellus producers can’t wait to serve these markets that are right next door,” Yardley said. “We’re shooting for a late 2016 in-service here.”