Appalachian pure-play Southwestern Energy Co. plans to keep year/year production and spending flat in 2021 even as it assumes a larger asset base and entry into Ohio with its acquisition of Montage Resources Corp. 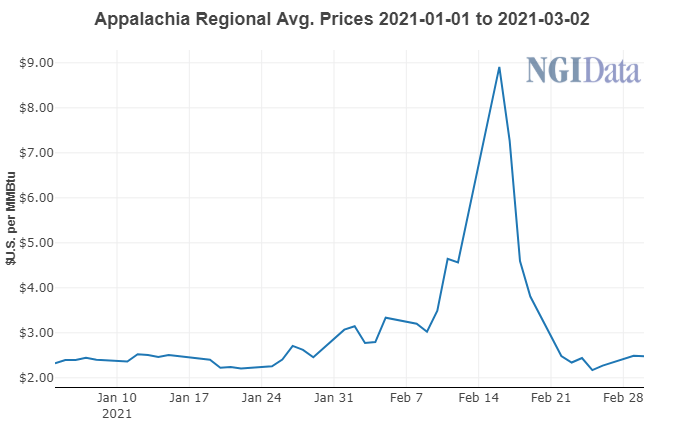 The exploration and production company laid out its vision for the year last week, joining peers in announcing a plan aimed at prioritizing free cash flow (FCF) generation, “disciplined investment” at maintenance levels and debt reduction.

“Our maintenance capital program will hold fourth quarter 2021 production flat with our fourth quarter 2020 level including the Montage assets,” said CEO Bill Way. “Due to our strategy, investments will be focused on the highest return projects at strip prices. And given the strength of our inventory, we expect to have activity in all of our core operating areas.”

In addition to its core areas in Northeast Pennsylvania and northern West Virginia, the company gained a foothold in Ohio with the acquisition of Montage, a tie-up that created Appalachia’s third largest oil and gas producer with more than 1 Tcfe of production anticipated this year. Way said the company moved a rig into Ohio and has since drilled its first dry gas Utica Shale well there.

Southwestern plans to spend $850-925 million this year and intends to exit 4Q2021 producing about 3.05 Bcfe/d. Management said the company would bring 75-90 wells to sales, including up to 15 in the Ohio Utica’s dry gas window. Capital investment would be split evenly between Southwestern’s dry and liquids-rich acreage across Ohio, Pennsylvania and West Virginia.

Southwestern produced 257 Bcfe in the fourth quarter, up from 208 Bcfe during the same period last year. Fourth quarter results included 49 days of production from Montage’s assets after the deal closed Nov. 13.

Southwestern reported a fourth quarter net loss of $92 million (minus 14 cents/share), compared with net income of $110 million (20 cents) in the year-ago period. The fourth quarter loss included a $335 million one-time impairment on oil and gas properties.

Average realized prices for 2020, including derivatives, were $1.94/Mcfe, down from $2.42/Mcfe in 2019 as prices fell across all commodities last year.