Southern Company, among the largest U.S. electric and natural gas distribution companies, said Thursday it had signed a deal to sell Sequent Energy Management, its wholesale gas trading and services business, in a move to reduce risk. 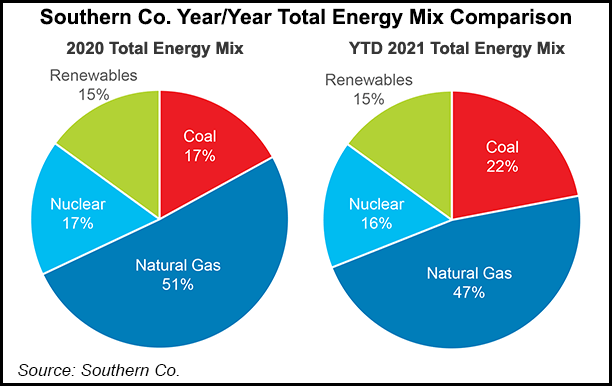 The Atlanta-based firm disclosed the planned sale, expected to close in the third quarter, along with its first quarter earnings results.

During a call with analysts and investors, executives said the sale was signed at book value so Southern would not see material gains or losses. However, executives said, it will enable the company to shed a volatile piece of its earnings per share (EPS) and free up capital.

“It will provide a return of the associated working capital and the elimination of certain credit supports of approximately $1 billion” in total, CFO Andrew Evans said.

“As a reminder, we have always excluded Sequent’s earnings from our adjusted results due to its quarterly variability. So the sale of this business both reduces risk and has no impact on our adjusted EPS expectations for the remainder of the year,” Evans said on the call.

Southern did not name the buyer nor make public terms of the deal.

“We have not announced the buyer because it’s something that they will likely announce on their earnings call that will come in future days. It is somebody very credible and respected in this space,” Evans said.

Sequent ranked sixth on NGI’s 4Q2020 Top North American Gas Marketers tally, reporting an 8% increase in volumes for the quarter. Its solid momentum countered that of leading marketers overall. The 22 gas marketers covered in the survey for which year-earlier data were available reported total sales transactions of 109.38 Bcf/d for the latest quarter, down from 113.07 for 4Q2019.

Southern executives said Sequent had a strong first quarter as well, generating net income of more than $100 million thanks to robust sales amid Winter Storm Uri in February. The Arctic freeze brought brutally cold temperatures as far south as the Texas border and caused a surge in demand for natural gas to heat homes.

Still, Southern’s management said the unit’s contributions to earnings were uneven, creating risk and volatility it was ready to shed.

Southern CEO Thomas Fanning said since 2010 Sequent has averaged about $40 million in annual net income. The average was skewed to the upside by two banner years in that span, he said, one when it produced $260 million and another in which it generated $163 million.

“If you exclude those big years, so over nine years, they averaged about $4 million of net income,” Fanning said on the earnings call.

Southern executives said the buyer of Sequent was better positioned to manage the variability of its earnings contributions.

“We just think we found a better owner for Sequent than ourselves,” Evans said.