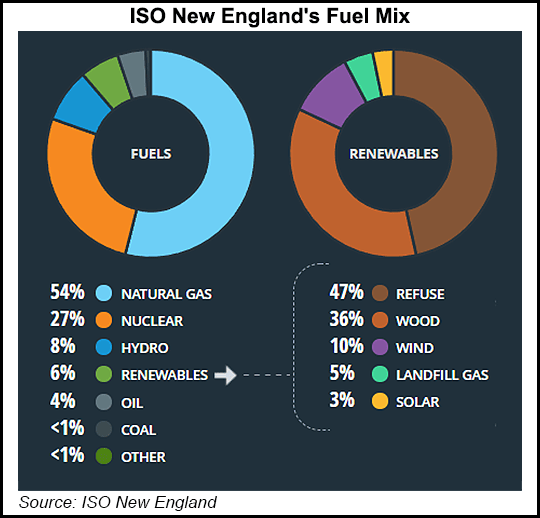 “As we continue our work with the New England states and industry stakeholders to transition to a cleaner grid, the ISO also has to maintain real-time power system reliability,” said CEO Gordon van Welie. “In recent years, oil and LNG have filled the gaps when extended periods of very cold weather have constrained natural gas pipeline supplies.”

For this winter, however, van Welie issued a cautionary note. He said that higher global prices for oil and LNG, coupled with pandemic-related supply chain challenges, could limit the fuels’ availability in New England if needed for power generation this winter.

“The region would be in a precarious position if an extended cold snap were to develop and these fuels were not available,” he said.

The impact of New England’s gas pipeline constraints have been evident in the spot market.

How Much Electricity Will New England Need?

Weather severity, the global price of oil and LNG that could affect storage and deliveries into New England, and gas pipeline constraints caused by simultaneous demand from heating customers and electricity generators represent three variables that could affect how the ISO operates the region’s power system, the grid operator said.

“If these risks materialize and threaten power system reliability, the ISO will turn to several operating procedures to manage the grid, up to and including controlled power outages,” said the grid operator.

Calling controlled power outages “a last resort,” the ISO explained they would be used to protect New England’s power grid from an “overall collapse” that could require a repair period lasting days or weeks. It noted that other, less drastic emergency procedures could include importing power from neighboring regions, drawing from power system reserves, and urging businesses and residents to voluntarily conserve energy.

“Highlighting these concerns is not meant to cause undue alarm at this early stage,” said van Welie. “Rather, by identifying and sharing the conditions under which the power system would be most challenged, we hope to prepare the region that if these conditions arise, the ISO, utilities, and government officials may ask for conservation of electricity and gas usage as an early step in avoiding or minimizing the need for emergency actions.”

ISO New England also took the opportunity to reiterate longstanding fuel supply issues in the region. “Constraints on the natural gas pipeline system limit the availability of fuel for natural gas-fired power plants, as heating customers are served first through firm service contracts,” said the ISO. “When natural gas is not available or is higher priced than alternate fuels, the wholesale markets will clear a mix of other resources, including resources fueled by LNG, coal, or oil.”

For his part, van Welie has said that an expansion of New England’s gas pipeline capacity would be unlikely.

The grid operator noted that about 7,000 MW of power plants fueled by alternate resources have been retired since 2013 or have been slated for retirement, with nearly 2,000 MW going offline since the winter of 2017-2018. Also, it said that more than 3,700 MW of gas-fired generating capacity is at risk of being unable to get fuel when needed this winter.

“The ISO does not have the authority to require generators to procure fuel in advance, though resources paid through the Forward Capacity Market to be available during periods of system stress face significant financial penalties if they do not meet their commitments,” ISO New England said.

The Forward Capacity Market, or FCM, is “a long-term wholesale electricity market that ensures resource adequacy, locally and systemwide,” according to ISO New England’s website.

The grid operator said its available FCM capacity supply obligation resources for this winter total 31,397 MW. The ISO added that its total resources — its maximum possible output, including FCM obligations and non-FCM capability — for the period are 34,422 MW.