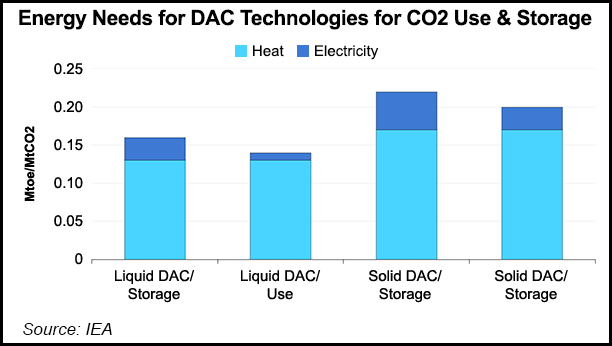 The Department of Energy (DOE) is deploying $12 million for research and development (R&D) underway to remove carbon dioxide (CO2) emissions from the air. Funding is being directed to universities and labs in Arizona, Kansas, Illinois and North Carolina.

The R&D effort to reduce greenhouse gas (GHG) emissions is centered around next-generation technology as part of the Biden administration’s goal for the country to reach net-zero emissions by 2050.

“Across the U.S., in states like Arizona and North Carolina, brilliant innovators are developing direct air capture technologies that can extract carbon dioxide straight out of the air,” said DOE Secretary Jennifer M. Granholm. The latest investments “are crucial to advancing technology that will help us avoid the worst effects of climate change and achieve carbon neutrality by 2050.”

Powering a DAC operation is costly and energy intensive. The World Resources Institute has pegged levelized costs of $94-232/ton of CO2.

Occidental Petroleum Corp. is one of the few U.S.-based producers actively investing in the technology to remove GHG emissions from Permian Basin operations. If all goes to plan, construction for its project could begin in 2022.

The federal R&D grants are focused on reducing the costs said to be holding back broad deployment. The funding also would help to increase design and operational efficiency, ensuring the process is carbon-negative, DOE said.

Three North Carolina projects, each receiving $1.5 million in grants, are centered around boosting the amount of emissions captured.

Charlotte, NC-based Cormetech Inc. is developing a DAC contactor, a process and material through which air and CO2 would be moved and captured. To test the possibility of powering DAC systems using wind capacity, the Research Triangle Institute in North Carolina also is designing, fabricating and piloting technology.

Meanwhile, the project team for Susteon Inc. of Cary, NC, is looking into a novel technology using a structured material that would be able to capture and contain high CO2 amounts.

Three other projects, receiving grants of $2.5 million each, are exploring DAC operations in distinct geographical locations with varying climates. The goal is to create a system able to capture 100,000 metric tons/year of CO2. No existing DAC system has that capacity.

Black & Veatch Corp. of Overland Park, KS, is developing an initial engineering design that would be piloted in Odessa, TX, within the Permian. Another system would be in Bucks, AL, with the third in Goose Creek, IL.

Arizona State University in Tempe is working with Silicon Kingdom Holdings Ltd. of Dublin, Ireland, on three carbon farms using a commercial-scale, passive DAC system. The goal is to  capture a “steady capacity” of 1,000 metric tons/day of CO2.

The University of Illinois at Urbana-Champaign is testing low-carbon energy sources that also could power a commercial-scale DAC operation. The university is working with partners to  design ways to permanently store CO2 at underground facilities in California, Louisiana and Wyoming.

In addition, the Illinois team plans to examine the effects of different climate conditions. Plans are to measure the impact of using low-carbon power sources, such as geothermal, solar, wind or waste heat, to reduce the life-cycle emissions of DAC technology.

DOE’s Office of Fossil Energy and Carbon Management and the National Energy Technology Laboratory are supervising the projects.