In a sweeping order, President Biden on Thursday directed federal agencies to find ways to mitigate the financial risks that climate change poses to businesses and consumers. 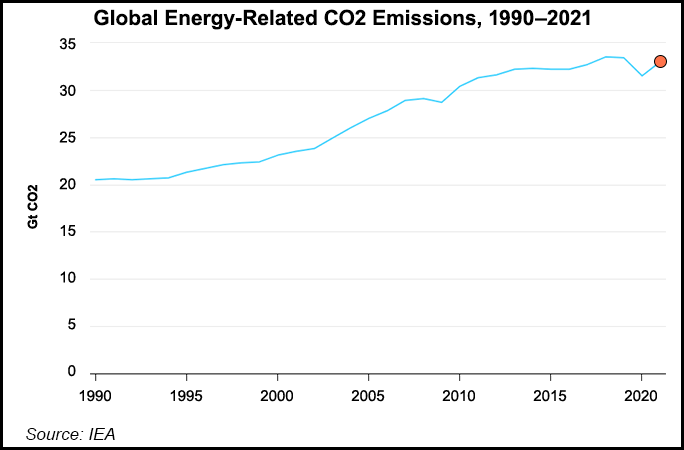 The executive order (EO) on climate-related financial risks is calling for a government-wide strategy to be developed within three months. It also calls for an annual assessment in the U.S. budget of related fiscal risks. The EO would use the power of the federal government’s purchasing power by requiring major suppliers to disclose their greenhouse gas (GHG) emissions and related risks.

“This cannot be optional; this cannot be voluntary,” White House climate adviser Gina McCarthy said during a press briefing Thursday. “The stakes are simply too high. The federal government has to lead by example.”

McCarthy and National Economic Council Director Brian Deese were tasked with overseeing the strategy. The goal is designed to work in tandem with the administration’s 2050 net-zero emissions goal. Biden has set a goal to cut U.S. GHG emissions by half by 2030.

The EO would provide “consistent, comparable and accurate disclosures” of climate-related financial risks, as well as address the impacts on communities of color, Deese said in the briefing.

The order also paves the way for the Office of Management and Budget, as well as the Treasury and Labor secretaries, to play key roles.

Treasury Secretary Janet Yellen, who chairs the Financial Stability Oversight Council, would work with the Federal Reserve Bank (Fed), Securities and Exchange Commission (SEC) and other regulators to review climate risks to the federal government and the nation’s financial system.

“Our pensions, our savings, our future livelihoods depend on the financial sector to build a more sustainable and resilient economy,” Yellen said. “We all need to have the best tools and the best data to make well informed decisions. This executive order puts us on the path to get there.”

Agencies including the Fed already are working to assess financial climate vulnerabilities.

Last September the Commodity Futures Trading Commission became the first U.S. agency to formally note that rising temperatures could impact the nation’s financial stability. In addition, the SEC in March requested public input about how to ensure public companies were transparent in disclosing financial risks from climate change.

While embraced by environmental groups and climate activists, the nation’s oil and gas industry expressed concerns about the EO. The American Exploration & Production Council (AXPC), which represents some of the largest upstream oil and gas producers in the United States, warned that the EO’s intent was misguided.

“We support transparent financial and climate-related disclosures that are material to the entity that is reporting so that people can make informed decisions,” said AXPC CEO Anne Bradbury. “As important, policymakers must avoid new climate disclosure rules that discriminate against American oil and gas producers.