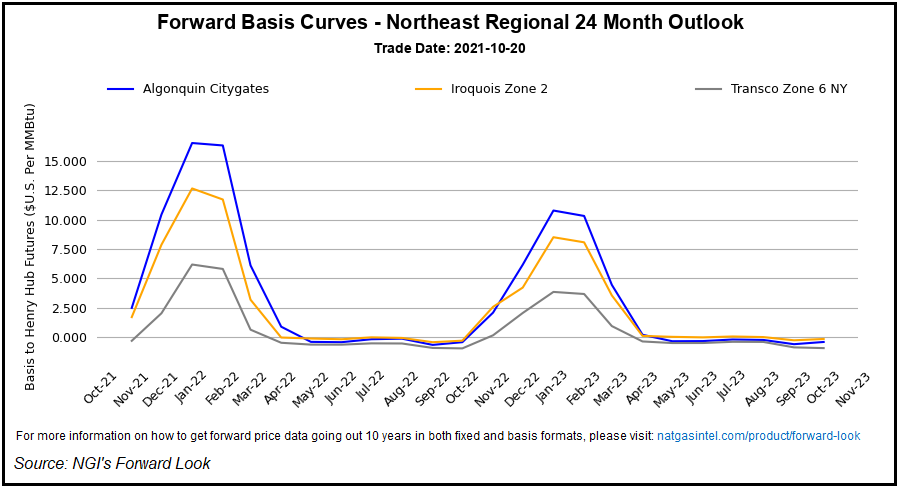 A 51.2-cent decline in November Henry Hub fixed natural gas prices for the period triggered losses of comparable magnitude at hubs throughout the Lower 48.

The steep losses in forwards trading coincided with heavy discounts for Nymex Henry Hub futures during the period, including some forays below the psychologically significant $5.00 mark. The November Nymex contract settled at $5.115/MMBtu Thursday, down 5.5 cents day/day.

Futures went on to rally in Friday’s session amid forecasts teasing the possibility of more impressive cold arriving next month; the front month settled at $5.280 to close out the week, up 16.5 cents day/day.

When prices broke above $6.00 earlier in the month, the market had seemed like a coiled spring waiting to go off once winter arrived. However, mild forecasts and a run of above-average storage builds have left the market waiting for a bullish catalyst, with the more dire heating season scenarios now feeling more remote, at least in the near term.

For those betting on colder-than-average temperatures to drive up natural gas demand this winter, government forecasters delivered some bad news Thursday.

In its 2021 Winter Outlook, the National Oceanic and Atmospheric Administration’s (NOAA) Climate Prediction Center said the Southern tier and much of the Eastern United States are most likely to see warmer-than-average conditions from December through February. Forecasters pointed to a second straight winter of La Nina climate conditions emerging.

“The Upper Mississippi Valley and small areas of the Great Lakes have equal chances for below-, near- or above-average temperatures,” according to NOAA.

“We continue to see models step up the level of blocking in the high latitudes into early November, which, while not making things all that cold right here and now, increases the risk that some colder than normal air finally gets involved down the road,” Bespoke Weather Services told clients Friday.

“…We are definitely putting our warmer idea for November on hold for now, given the blocking shown, as any further improvement in the Pacific pattern risks bringing actual cold into the pattern, which would likely lead prices much higher” in the upcoming week.

Meanwhile, the U.S. Energy Information Administration (EIA) on Thursday unveiled another deficit-shrinking weekly storage build, this time a 92 Bcf injection for the week ending Oct. 15. With the latest print, the injection rate has now exceeded the prior five-year average for each of the past six weeks, EIA data show.

Even with more cushion in inventories as of late, the story remains the same as far as assessing risks heading into the heating season, Energy Aspects said in a recent research note.

“Ultimately, the prospect of gas rationing prices and deliverability risks hinges on how cold the winter will be,” the firm said. “Conditions will have to border on 10% colder than normal on an average basis, or there must be significant cold early in the season.”

Still, even a mild November won’t rule out potential deliverability issues later in the season, according to the firm.

“Power demand this season is much less price sensitive, with near exhaustion of gas-to-coal substitution, the need to preserve coal stocks and a significant portion of Northeastern gas-to-liquids switching in the money for peak-winter months,” Energy Aspects said.

This comes as “the closure of industrial production capacity outside of the U.S., especially in ammonia and aluminum,” and discounted Henry Hub prices compared to natural gas costs internationally could make “some portion of U.S. industrial demand cost competitive,” the firm added.

What’s more, U.S. production appears to have “little opportunity for a significant step-up in output” outside of “immediate” drawdowns of drilled but uncompleted wells.

Of course, as prices at the Dutch Title Transfer Facility (TTF) would indicate, Europe finds itself facing down a far more dire supply situation than the United States in the event of a frigid winter.

“Due to continuing competition from Asia and South America” for liquefied natural gas (LNG) cargoes “and limited prospects of additional volumes out of Russia, gas storage woes are set to continue” in Europe, Rystad Senior Gas Markets Analyst Kaushal Ramesh said in a recent note. “In fact, Europe is heading into winter with storage levels 20% below the low end of the five-year range, risking rapid depletion in the event of a frigid winter.”

While the overall direction of fixed price trading during the Oct. 15-20 period was decidedly downward, there were some notable basis shifts at hubs along both the East and West coasts.

Forecasts during the week showed the western part of the Lower 48 experiencing the chilliest conditions in an otherwise unimpressive pattern nationally.

“The West will be the nation’s coolest region next week and beyond as a barrage of weather systems bring heavy rain and snow, including to California, improving hydro generation,” NatGasWeather said in a recent note to clients.

The midday model runs Thursday trended colder for the Oct. 30-Nov. 3 time frame by showing cooler temperatures over the northern United States, according to NatGasWeather.

The models “aren’t bullish, but the data isn’t as bearish for Oct. 30-Nov. 3 as it had been, which the natural gas markets likely noticed,” the firm said. “To our view, if this pattern were to prove true, it does open the door for additional cooler trends in time toward a more seasonal setup for the start of November, instead of solidly bearish as it had been.”