In a rare overview of its Marcellus and Utica shale operations, a Royal Dutch Shell plc official told a crowd at an industry conference in Pittsburgh on Wednesday the supermajor is “strongly committed to Pennsylvania,” where its natural gas wells have low breakevens and generate competitive cash flow within the U.S. unconventional portfolio. 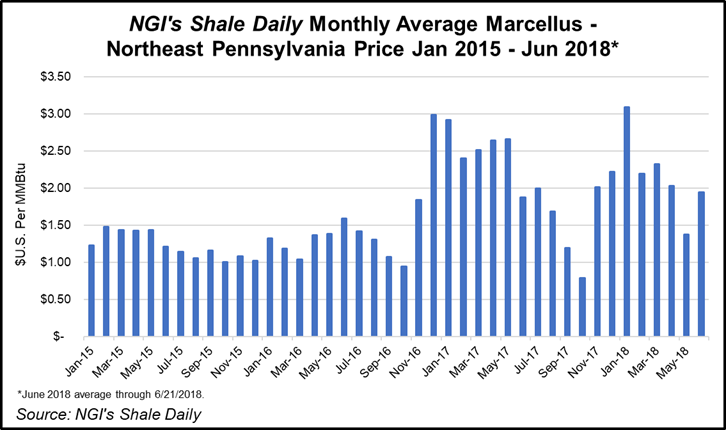 Shell has about 544,000 acres scattered throughout the state and currently produces 444 MMcf/d with a breakeven price of about $2.00/MMBtu, said Shell Oil Co.’s Tonya Williams, general manager of unconventional Appalachian resources.

“So, natural gas in the Appalachian Basin is going to be quite affordable for us…in particular with strong Henry Hub” prices, she said at Hart Energy’s Dug East Conference and Exhibition. “This is an excellent fit for our strategy. We talked about 25% oil, 75% gas,” she said, referring to Shell’s global production mix. “While we want to get balance in those ratios in the short-term, Appalachia is short-term cash and a wonderful hedge against long-term prices.”

Indeed, integrated gas, conventional oil and gas, and oil products are Shell’s main cash engines, but deepwater operations and chemicals are the priorities today. However, in unconventional resources, which include a huge position in the Permian Basin, and its technology division, New Energies, which is working on renewables solutions, Shell sees emerging opportunities, executives said at the annual management day last year.

Shell revamped its upstream business in 2015 and created an unconventional resources arm to oversee plays including the Marcellus and Utica. Since the revamp, Appalachian cycle times have been cut, costs have been reduced and 89% of the wells have performed in the top 5% of all those in the basin, Williams said.

“It’s interesting, our position, because it was known for many as what they believed to be an overmature part of the basin,” Williams told the crowd, referring mainly to north-central Pennsylvania, where the company works the Harvest area in Tioga County.

“We’ve actually discovered a dry gas sweetspot, primarily in the Tioga area, that we are using to our competitive advantage.” Shell attracted attention to the region about four years ago after testing two Utica discovery wells with success in an area that was about 100 miles northeast of the nearest Utica operator at the time. The region, once a Marcellus hotbed, has seen an uptick in activity since.

Shell does “see and have options” to explore in other counties in the north-central part of the state, Williams said. The operator also has in other drier portions of the play in western and central Pennsylvania, including deep Utica rights that eventually could be explored as well as acraege in eastern Ohio.

Another Shell unit is building a multi-billion dollar ethane cracker in Beaver County, PA, but Williams said the Appalachian wells would not be providing supplies for the facility given their dry gas profiles. Ten other natural gas producers have signed 10-20 year ethane supply agreements to anchor the cracker.

For now, Shell’s onshore team in the region is focused on the 250,000 acres it holds in Tioga County. The Appalachian division is operating on a $150 million capital budget this year, with plans to drill four pads and complete three with laterals of 10,000-15,000 feet in north-central Pennsylvania. One rig is to be idled in the county sometime this summer but the rig could go back to work quickly as plans for the next three years are being reviewed.

Appalachia, however, must compete for capital with all the other unconventional resources in Shell’s portfolio, she noted. In addition, Northeast takeaway constraints and low gas prices may factor in to what’s available to spend.

“We have in our portfolio a number of different positions; we talked about 25% oil and 75% gas, so we’re quite gassy right now. Some of the focus is to get a bit more balance and that’s consistent with being competitive and managing the swings in the market,” Williams said.

“We are quite competitive, we have a low breakeven, we’ve got some of the best in our portfolio from Shell’s perspective, in the wells that we’re drilling. We fit right in there, but when you’re looking at the overall strategic picture, we view Pennsylvania as a growth option.”