A unit of Royal Dutch Shell plc said Tuesday it is pulling the trigger to invest in Vito, a deepwater development in the Gulf of Mexico (GOM) that it estimates has a forward-looking, breakeven price of less than $35/bbl. 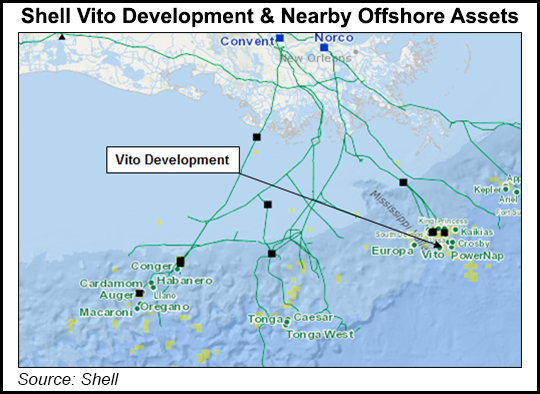 Vito is expected to reach peak production of 100,000 boe/d; the development in Mississippi Canyon has an estimated, recoverable resource of 300 million boe.

“With a lower-cost developmental approach, the Vito project is a very competitive and attractive opportunity industry-wide,” said Shell Upstream Director Andy Brown. “Our ability to advance this world-class resource is a testament to the skill and ingenuity of our development, engineering and drilling teams.”

At the start of the year Shell had three deepwater projects in the GOM under construction — Appomattox, Kaikias and Coulomb Phase 2 — as well as a potential FID for the Vito hub. Shell expects its global deepwater production to exceed 900,000 boe/d from already discovered, established areas.

With rising costs offshore, Shell in 2015 began to redesign the Vito project, reducing cost estimates by more than 70% from the original concept. The cost savings have come from the revamped design, in addition to working collaboratively with vendors on well design and completions, subsea, contracting and topsides design.

Vito, Shell’s 11th deepwater host in the GOM, currently is scheduled to begin producing in 2021. The development is in four blocks and is to consist of eight subsea wells with deep (18,000 feet) in-well gas lift.

Shell noted that the estimated breakeven for Vito production is based on all of the forward-looking costs associated from the FID. Those costs typically exclude exploration and appraisal costs, lease bonuses, exploration seismic and exploration team overhead costs.

The breakeven price was calculated based on Shell’s estimate of resources volumes, which currently are classified as proved plus probable and contingent reserves under the Society of Petroleum Engineers’ Resource Classification System.