U.S. natural gas production hit 87.08 Bcf/d in June, a 0.5% increase from 86.63 Bcf/d in May and a whopping 6.9% (5.61 Bcf/d) more than in June 2013, helped in large part by shale production, according to the latest Monthly Natural Gas Gross Production Report issued Friday by the Energy Information Administration (EIA). 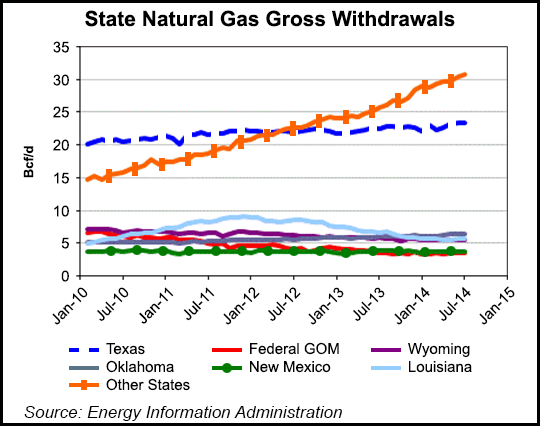 The Other States category, which includes several shale-rich states, had 30.83 Bcf/d of gross withdrawals in June, up 1.3% compared with 30.42 Bcf/d in May, and a 19.6% (5.05 Bcf/d) increase compared with 25.78 Bcf/d in June 2013. It was the largest volumetric increase in the report and came “primarily because of new wells coming online,” EIA said.

But it wasn’t all good news. The Federal Offshore Gulf of Mexico experienced the largest decline in production at 3.44 Bcf/d, down 0.9% compared with 3.47 Bcf/d in May and nearly flat compared with June 2014. June’s decline was attributed to shut-in wells by several operators, EIA said.

“In our view, natural gas production will continue to see growth in the coming months, and we continue to believe that 2014 will post accelerated growth y/y overall,” Barclays Capital analyst Christopher Louney said in a review of the report in a note Friday. Barclays expects that growth to continue in 2015.