Based on the most recent state data for this year, New Mexico is on track to bust the 80 million bbl oil production level for the first time since the late 1970s, and natural gas is expected to stay level at about 1.2 Tcf, according New Mexico Oil and Gas Association (NMOGA) officials. 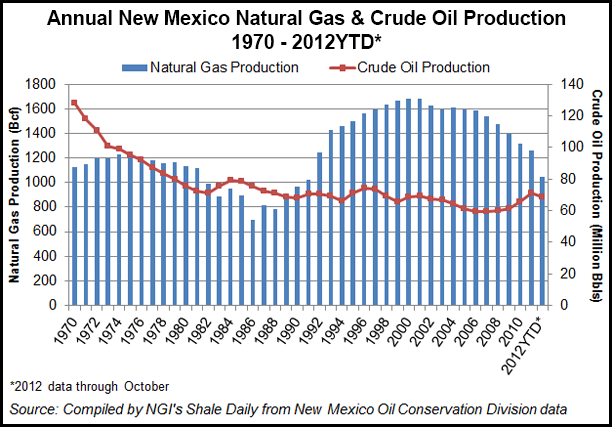 Even with the cutback in dry gas drilling due to low prices, there is more associated gas production with the continued ramp up of oil production, said Wally Drangmeister, NMOGA communications director, who has based his bullish projections on the year-to-date statistics (as of mid-October) compiled by the New Mexico Oil Conservation Division.

“You have to go all the way back to 1978 and 1979 to see production levels in the range we’re now in,” Drangmeister said. “The increased production shows up in reports on both the federal government’s Energy Information Administration and the state conservation agency.”

NMOGA has concluded that the robust oil/gas production is “one of the main reasons” that state economists are forecasting that $283 million in additional revenues will flow to the state next year from the oil/gas industry.

“All but four or five of the rigs operating in New Mexico are in the Permian Basin, the state’s producing area,” Drangmeister said. “Natural gas is on pace to be very close to last year’s levels (1.26 Tcf), and the reason it is not down further is the associated gas coming from oil production.

“Whether gas production goes back up in the near future may depend on the success of drilling projects in northwest New Mexico where producers are looking for liquids-rich areas. How those will play out is maybe a little too early to tell.” This is an area including new shale formations where a lot of horizontal drilling is being applied, he said.

“Absent any dramatic changes in regulation that really slows the industry down, the prospects for even greater production in 2013 looks strong,” Drangmeister said. “There are a lot of rigs out there, but really not a whole lot more; statewide the number of rigs has not dramatically increased. But a lot of them are drilling long horizontal wells, and the production that comes from these wells is very large, such as up to 1,000 b/d initial flow.”