After two solid days in the black, natural gas futures prices reached new heights on Wednesday as production continued to decline, and hot weather remained firmly in next week’s forecast. The September Nymex gas futures contract hit a $4.205 intraday high before settling at $4.158, up 13.1 cents from Tuesday’s close. 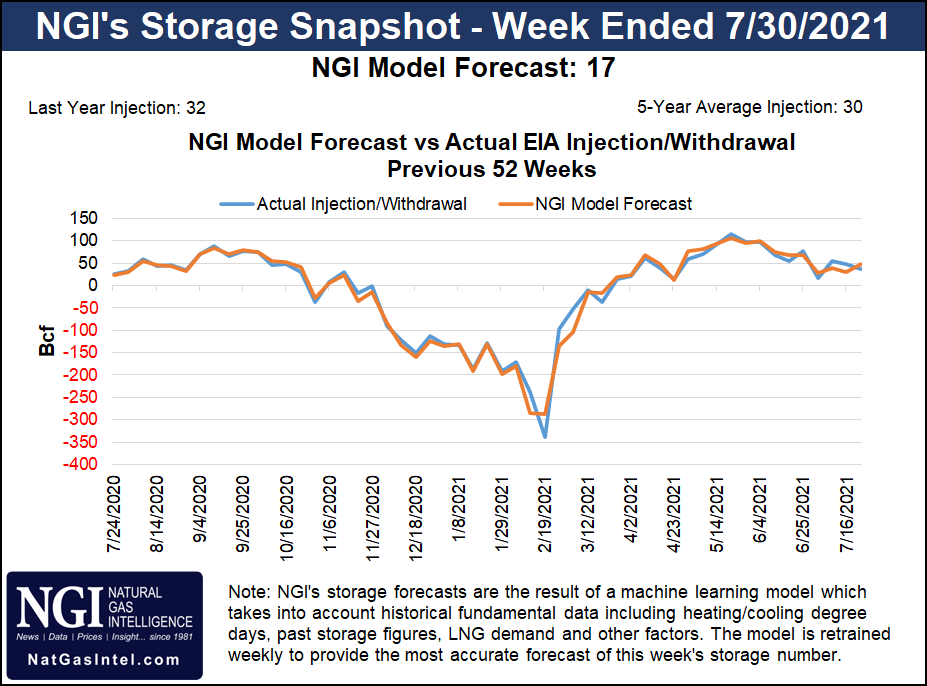 Spot gas prices also strengthened as the cool conditions experienced in much of the country this week started to fade. With warmer temperatures on the way, NGI’s Spot Gas National Avg. ticked up 12.0 cents to $4.120.

The potential for intense heat next week already has cut short an emerging period of consolidation in the gas market, according to EBW Analytics Group LLC.

A growing cooling demand outlook for the coming 15-day period could lift weekly cooling degree day (CDD) forecasts for the week ending Aug. 12 to 93, which is 25 CDDs hotter than this week.

The supportive outlook comes as long-range weather forecasts remained stable again Wednesday morning. The outlook showed next week as the “hottest week of the summer,” said Bespoke Weather Services. Forecasters pointed to widespread temperatures in the 90s across the Midwest and East underneath a strong upper level ridge in the six- to 10-day period. A couple of days next week are forecast to reach near records in terms of national gas-weighted degree days.

“Heat does come off somewhat as we reach the end of next week, but remains generally at or just above the five-year average,” Bespoke said.

Stronger winds also are still in the cards for early next week, but they may drop off by late week, according to the forecaster. Tropical activity remains “very quiet for now, but that lull should not last too much longer.”

NatGasWeather said the midday Global Forecast System erased 2 CDDs from the 15-day outlook, but it’s not surprising as it had suspected the data likely had gotten “a little too hot.” The data was still “to the bullish side,” according to the forecaster.

“As we’ve been stating, cooler trends or bearish news gets little to no reaction from the natural gas market, while hotter trends/bullish news pushes prices higher,” NatGasWeather said.

EBW said the miniscule build projected in Thursday’s EIA report could kick off a multi-week expansion of the storage deficit versus the five-year average. Over the next eight weekly reports, the storage deficit could climb by more than 65 Bcf, an undersupply increasing by an average 1.2 Bcf/d into mid-September. The swelling deficit could occur as the market becomes increasingly jittery about the prospect of entering winter with less than 3.5 Tcf in storage by the end of October, according to EBW.

Bespoke noted that production early Wednesday had fallen to around 90 Bcf, well off recent highs of 92-93 Bcf/d. “We are running out of ways to basically say the same thing…which is that we simply do not have adequate supply at this time to alleviate concerns about heading into winter with an uncomfortably low amount of natural gas in storage.”

To that end, the firm noted that price spreads such as the October-January spread are about 5 cents wider than their narrowest point only a few weeks ago. This has occurred despite October prices being 50-plus cents higher.

“That tells a lot about how bullish the big picture is in this market as of right now, and how prices can still actually go considerably higher if we cannot gain enough production to loosen supply/demand balances,” Bespoke said.

The firm said these strong pushes higher, followed by consolidation, have occurred in the past. “Very wide” daily trading ranges are possible before a “new push higher, rinse and repeat,” according to Bespoke.

“There is little reason to think, right now, this will not continue until/unless production can reach 2021 highs.”

Spot gas prices continued to strengthen in the face of moderate demand. Though recent cooling is expected to fade by the weekend, there are still a couple of days of light national demand to get through.

AccuWeather said after the unusually cool weather on the East Coast this week, a return to more typical “sultry” August weather is forecast in the coming days. The forecaster expects major cities to see highs throttle up once again late this week into next week — with more opportunities for the mercury to hit 90 degrees.

“Many of the major cities, such as Chicago, New York City, Philadelphia, Detroit, Boston, Pittsburgh, Cincinnati, St. Louis and Washington, DC, have the potential to add a number of 90-degree days to their tally for the season,” AccuWeather said. “Many cities are on track to finish near average for the year in terms of hot days.”

Typical early August high temperatures range from the upper 70s in the northern Great Lakes, northern New England and the highest elevations of the central Appalachians. They approach near 90 around the Chesapeake Bay and the lower Ohio Valley, according to the forecaster.Interestingly, some West Coast cash markets softened on Wednesday despite the continuation of oppressive weather in the region. The SoCal Border Avg. plunged 46.0 cents to $6.715.