While weathering a tumultuous stretch in the natural gas market headlined by a Category 4 hurricane crashing into the Gulf Coast, bidweek traders throughout much of the North American market locked in premiums for the month of September. 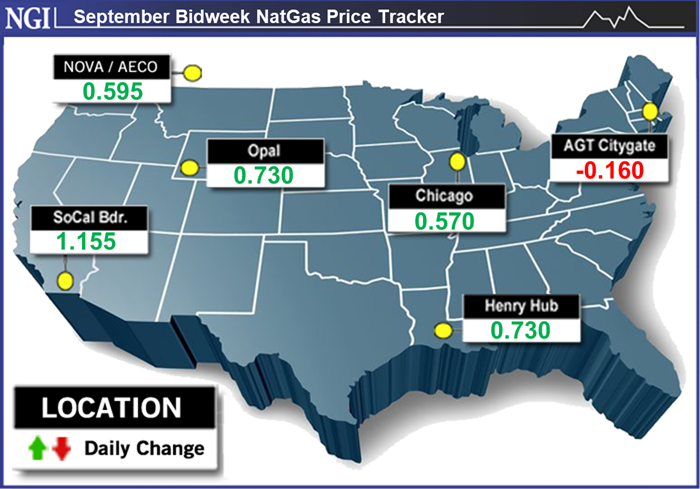 Laura’s arrival last week prompted a sharp drop in LNG feed gas volumes driven by shut-ins at the Cameron and Sabine Pass export terminals. As of Tuesday, questions surrounding Laura’s lingering impacts on U.S. LNG export activity focused around when volumes would ramp back up, with some indication that feed gas demand could soon far exceed pre-storm levels.

Analysts at EBW Analytics Group were eyeing the possibility that the Cameron and Sabine terminals will make up for lost time once they resume export activity.

“When Sabine Pass and Cameron were shut down last week in anticipation of Laura, daily feed gas flows to U.S. terminals quickly fell to below 3 Bcf/d,” the EBW analysts said.

As of Tuesday they estimated a cumulative 18.5 Bcf net decrease in feed gas flows due to the storm. However, this is “anything but” a permanent loss of demand, according to the EBW team.

“The vessels expected to be loaded over the past week are still sitting in the Gulf,” they said. It’s likely that “all 18.5 Bcf of previously expected deliveries plus the additional shortfalls expected before Sabine Pass and Cameron return to service will still occur, with the deliveries made in the first one to two weeks after production resumes.

“Further, this ‘make-up’ production is likely to happen during the same period in which LNG exports were already expected to increase from the 5 Bcf/d pre-hurricane to as much as 6-7 Bcf/d due to the sharp drop in the number of canceled cargoes expected in September.”

In total, this could mean a roughly 4-5 Bcf/d surge in daily feed gas volumes compared to levels observed at the start of this week, which could “boost gas prices significantly” once the terminals return to service, according to EBW.

On Monday, Sempra Energy LNG said preliminary, visual inspections of the Cameron terminal, among other locations of interest to the company in the region, indicated “minimal flooding and no catastrophic wind damage.”

Cheniere Energy Inc. similarly reported “no significant damage” to the Sabine Pass terminal and company pipelines as a result of Laura, with the facility “performing as designed” through the storm. All employees are safe, and the company has begun executing its plan to restart LNG production at Sabine Pass.

Energy Aspects in a recent note to clients highlighted potential risk factors for prolonged interruptions to LNG feed gas flows out of Louisiana.

A lot could depend on “how quickly each terminal’s ship channel reopens,” the firm said. This past Wednesday “both reached port condition Zulu, the most severe weather-related status…While conditions typically revert to normal as quickly as one day after a hurricane passes, this is not guaranteed; high water levels forced a near-weeklong closure of traffic on the Sabine River after Hurricane Harvey in 2017.”

Prior to Laura’s arrival, futures prices had been trending upward throughout the month of August. The September contract rolled off the board last week at $2.579. That equated to a 73.0-cent month/month jump in bidweek prices at benchmark Henry Hub.

Bidweek prices throughout much of the Gulf Coast and Southeast followed Henry’s lead, with gains of 60 cents or more commonplace at regional hubs. In East Texas, Houston Ship Channel averaged $2.550, a 70.5-cent gain. In the Southeast, Transco Zone 4 rallied 68.0 cents to average $2.535.

The prospect of rising LNG feed gas volumes, combined with weaker production levels compared to last year, has helped to build a bullish case for winter prices that is “quite evident” as the end of the injection season approaches, according to Bespoke Weather Services.

“Our point of contention lies at the front of the curve, as the rise in prices is leading to loosening of power burns, even with nuclear outages well above last year,” Bespoke said. “This year-on-year nuke difference likely lessens over the next couple of weeks, however, and with storage at record levels in multiple regions, this can still make things dicey if weather is not bullish.”

What’s more, based on forecasts, September weather has looked “rather disappointing” so far compared to recent years, according to the firm.

“This leaves room for the front to fail even as winter stays quite firm,” Bespoke said.

With projected end-of-injection-season levels nearing 4 Tcf amid recent futures gains, Nymex contracts at the front of the curve could be in for “more of a protracted fight higher — with greater volatility likely,” according to EBW.

“…With the market attempting to fill inventories to the brim without spilling over…reduced flexibility in the end-of-season storage figure may force increased price volatility to balance the market and keep inventories within the desired range.”

For September bidweek, plump storage levels and the prospect of comfortable shoulder season temperatures appeared to take their toll on regional prices in the Northeast and Appalachia.

The Energy Information Administration (EIA) reported 775 Bcf of regional stockpiles in the East as of Aug. 21, 9.3% above the five-year average and flirting with the five-year max of 781 Bcf for the period.

It was a very different story on the West Coast, where September premiums at numerous locations outpaced the gains at Henry.

Other locations in California and the Desert Southwest posted strong gains for the month, including Kern Delivery, which climbed $1.745 to $3.830, and SoCal Border Avg., which picked up $1.155 to reach $2.935.