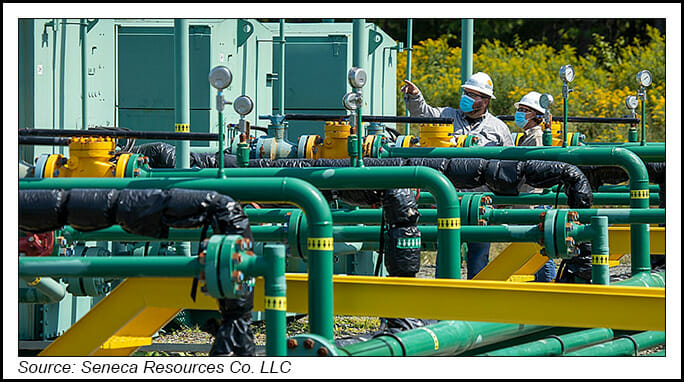 “Seneca’s commitment with Project Canary seeks to independently verify our existing operational practices and further strengthen the company’s ESG commitments. We are excited to work toward independent validation of our leading operational and environmental practices, many of which are standard across our Appalachia assets.”

Denver-based Project Canary uses a proprietary process for operators seeking RSG certification, with a focus on air, land, water and community impacts. Overall, the certification process is expected to analyze more than 600 operational and ESG-related data points on a per-well basis.

A bevy of North American natural gas producers are jumping on the RSG wagon, from the Haynesville Shale to the Montney Shale. The RSG designation is becoming valuable for liquefied natural gas (LNG) exports, particularly to countries that are working toward net-zero emissions.

Houston-based Southwestern Energy Co. in June became the nation’s first exploration and production company to certify that its natural gas was responsibly produced from all of its wells in Appalachia.

There are many ways to certify gas as responsibly sourced. For example, EQT Corp., the largest gas producer in the Lower 48, has partnerships with Equitable Origin, MiQ and Project Canary to certify about 4 Bcf/d from 200-plus wells in Pennsylvania.

Haynesville pure-play Vine Energy Inc. is working to certify all of its gas output through Project Canary. Chesapeake Energy Corp., which in July said it would take over Vine, launched a similar program earlier this year for some of its Marcellus Shale and Haynesville volumes.
The RSG trade is expanding in Canada as well.