Russian aggression toward Ukraine continued to stress European alliances and global natural gas prices Friday following the defeat of sanctions for the 5.3 Bcf/d Nord Stream 2 (NS2) pipeline in the Senate. 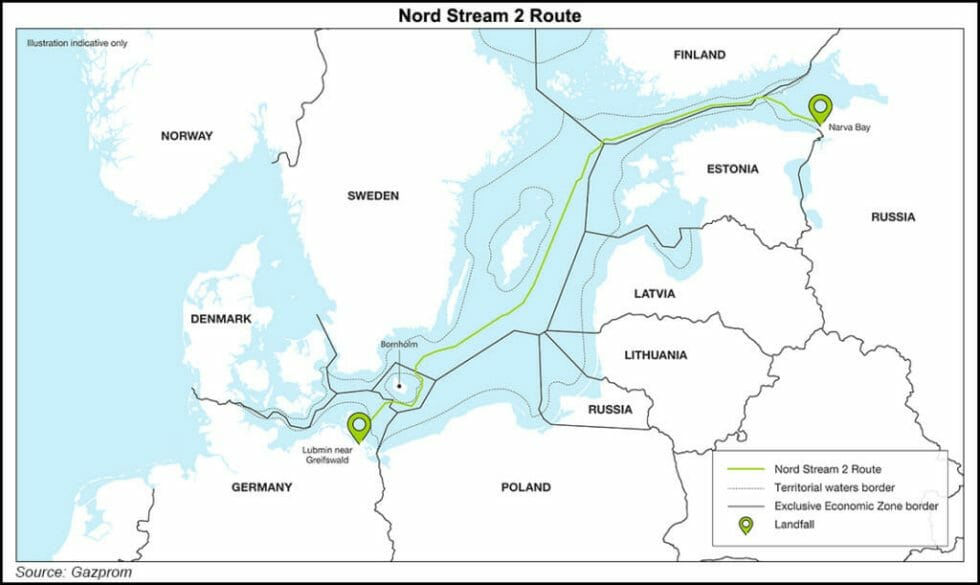 Democratic Senate leaders argued that unconditional opposition to the pipeline, which is designed to bring more natural gas from Russia to western Europe, could take away a key tool for the Biden administration to temper Russian aggression against Ukraine.

But, as Russia signaled it may be willing to abandon diplomatic meetings with the United States after a week of unsuccessful talks, Cruz pushed for a preemptive move against the country’s key infrastructure project.

“Another argument that we will hear is that sanctions should be kept in our pocket, we should reserve them for use later, in the case of a Russian invasion,” Cruz said. “Now, I would note, this is not what our Ukrainian allies advocate. And I have trouble believing anyone in this chamber actually takes this argument seriously, nor should they. Putin doesn’t.”

NS2 is majority owned and operated by Nord Stream 2 AG, a wholly owned subsidiary of the Russian-state firm Gazprom PJSC. Natural gas started flowing on NS2 in October of last year and commissioning ramped up through the end of 2021, but the pipeline hasn’t entered service. Germany still needs to approve the project in a decision that will be reviewed by the European Union.

Why Is NS2 Important?

The continued political turmoil between Ukraine and Russia and reduced flows to Europe – down 25% in the last three months of 2021– has added to price fluctuations across the continent, where natural gas storage inventories are at their lowest point in over a decade. NS2 is seen as key to helping restock European natural gas storage facilities.

“Normal winter weather, including in Asia, and visibility on Nord Stream 2 commissioning would push prices down, although demand for storage – and high carbon prices – will maintain prices above $15/MMBtu,” Di Odoardo said.

In its Friday morning report, Danish energy trading group Energi Danmark reported higher LNG imports had started to help European supply woes, but “the risk of a potential new war in Ukraine and the effects this could have on the gas market” were still wearing on the markets as storage levels remained below average.

Dozens of liquefied natural gas vessels have redirected toward Europe over the past month as prices have surged thanks in-part to the low gas flows from Russia, lessening any relief expected from milder winter weather predictions for the continent.

Energi Danmark expected markets on Friday to rise again after news from France about nuclear production for the year being lower than previously estimated. The February Dutch Title Transfer Facility (TTF) contract rose more than $3 by the close of markets on Thursday, settling at $28.723/MMBtu. TTF gained again Friday, closing above $29.

European gas storage levels have also continued to sink, especially after missing Italian data caused numbers to be revised at the beginning of the week. European gas storage was reported at 49.3% full on Friday, compared to the five-year average of about 65%.

Despite Thursday night’s decision to pass on Cruz’s version of sanctions, some Senate Democrats have called for support of a different version of pressure on Russian President Vladimir Putin’s actions.

Various news media reports on Friday said U.S. officials have indicated Russia may already be preparing an “operation” to justify an invasion of Ukraine.

In response to the reports and more details about a cyber attack against the Ukrainian government, Menendez condemned the attacks and urged for additional U.S. cooperation to support Ukrainian defense.

“We must stand alongside our partners in Kyiv,” Menendez said. “The Senate should act now and pass the Defending Ukraine Sovereignty Act to send a strong deterrent message to Moscow while hardening Ukraine’s military and cyber defense capabilities.”
Sanctions against NS2 were levied near the end of the Trump administration in 2020, but were lifted a few months later as the Biden administration sought to renew ties with European allies and strengthen diplomacy with Russia.