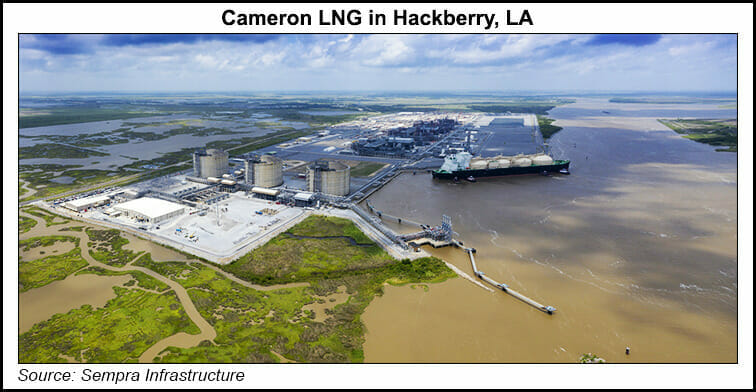 The subsidiary of San Diego-based Sempra said Monday it had secured a participation agreement with TotalEnergies, Mitsui & Co. and Mitsubishi Corp. to develop the proposed Hackberry Carbon Sequestration (HCS) project in Hackberry, LA.

Under the tentative agreement, the companies could form a joint venture to progress the project in southwestern Louisiana that would be anchored by capturing carbon dioxide (CO2) produced by natural gas liquefaction at Cameron LNG.

Sempra Infrastructure CEO Justin Bird said HCS is intended to be a starting point for the company’s “net zero solutions” from its assets like Cameron LNG. The scope could go beyond the terminal.

“This project is expected to be among the first North American carbon capture facilities designed to receive and store CO2 from multiple sources, and our goal is for this facility to set the gold standard for safe and permanent CO2 storage,” Bird said.

Sempra filed an application with the Environmental Protection Agency last year for an injection well permit that could allow it to store up to 2 million metric tons/year (mmty) of CO2. The company detailed last summer that the project could reduce Scope 1, or direct emissions, by an estimated 15%.

HCS could include three injection wells and the capability to store around 89 mmt of CO2, according to the company.

Other companies have been looking to decarbonize their businesses through carbon capture, utilization and storage (CCUS) methods, spurring development in the Gulf Coast and beyond. Talos Energy Inc. and Carbonvert Inc. announced talks with Chevron Corp. earlier in the month for an offshore CCUS project on the Texas coast.

The agreement for HCS builds on Sempra’s streak of increasing equity partnerships as it continues to grow its LNG projects in North America. The company announced last month a similar agreement with TotalEnergies, Mitsui and Japan LNG Investment LLC to develop a fourth liquefaction train to expand Cameron. Japan LNG is jointly owned by Sempra’s two existing partners in the first phase of Cameron, Mitsubishi and Nippon Yusen Kabushiki Kaisha.

TotalEnergies has also been strengthening its cooperation with Sempra on renewable energy and low-carbon projects in Mexico and offshore California. The French supermajor already has 16.6% stakes in the first phase of Cameron LNG, as well as Sempra’s Energia Costa Azul project proposed in Baja California, Mexico.

The ongoing hunt by European companies and governments for LNG cargoes to displace dependence on Russian gas has increased activity for developing U.S. projects.