Schlumberger Ltd. may be a bellwether for the the rest of the energy industry as it unveils its second quarter results, with some fearing things could actually get worse instead of better. 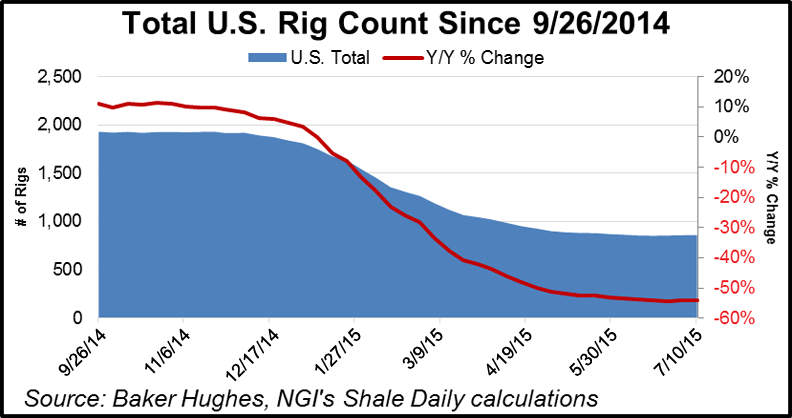 It’s going to be “hard to find good value” across the OFS sector, said Wunderlich Securities Inc. analyst Jason Wangler. Like its exploration and production (E&P) brethren, the OFS sector has been volatile to date this year.

“While it appears as if the U.S. rig count has started to find a bottom, it is 25%-30% lower than most all had expected to start 2015, and pricing has collapsed much harder than most believed, leading many OFS names to do work at break-even rates (or not at all depending on company strategy),” Wangler said in a note. “The biggest question we have is how the stocks react to yet another bad quarterly report” and a likely negative/lower-than-expected forecast for the second half of this year.

During 1Q2015, he noted, OFS stocks “reacted positively to a perceived (and false) bottom, but we believe investors are finally realizing how tough the overall sector is both today and for the next six to 18 months. That said, we do see some pockets of opportunity, but overall we remain cautious/bearish into the 2Q2015 prints.”

“With the quarter now over, we expect more preannouncements that could have negative overtones or number reductions; and overall we believe there could be yet another cut to numbers” for the second half of 2015 (2H15) “and potentially beyond, given the continued activity and pricing weakness in the U.S. market,” Wangler said.

“This may be tough to say given the recent oil price weakness, but after 26 straight weeks of rig count declines…that finally turned recently, we could now be in a holding pattern with a handful of companies expected to add rigs in 2H15 and some with rigs still to drop.”

Completions may be stabilizing following big cuts in pricing. However, while pricing remains aggressive, operating margins likely are going to be below most expectations and could even be negative.

“Given so many rigs under contract and not drilling, a boost in the rig count might not be as helpful as many believe,” said Wangler. “With so many rigs under contract but not drilling/on standby, we believe that if rigs are added in a short-term nature or opportunistically by those not looking for a long-term contract, that the rig count could move higher without a subsequent boost for the contract drillers as E&Ps sub-lease their idle rigs. While this is a relatively short-term phenomenon, given the term of some contracts, we believe it does provide a bit of a headwind and could cause a rig count move without additional funds hitting the bottom line.”

The oil price gyrations over the past couple of weeks should influence OFS activity through the rest of the year, Tudor, Pickering, Holt & Co. (TPH) analysts said.

“We continue to believe domestic activity is…at bottom and the battle within 3Q2015 results relative to those generated in 2Q2015 will be the downward slope to 2Q2015 activity levels (June generally worse than April…” To achieve flat revenues sequentially in 3Q2015, “there needs to be an up slope” between July and September, cost relief taking hold and reduced pricing pressure.”

The market is expected to focus on Schlumberger for a few things, according to TPH, including commentary about the planned Halliburton Co./Baker Hughes Inc. merger — the No. 2 and No. 3 global OFS providers. Halliburton and Baker each report quarterly results early next week.

“Each player made significant cost cutting moves in 1Q2015 and we are looking to see where each company is in that process,” said TPH analysts.

For the pressure pumpers, “it often looks darkest just before the dawn and we believe this is certainly true of this uber-cyclical subsector,” they said. The second quarter results “will be very ugly…and all players are going to feel pain in the near term. Even at the gross margin level, we don’t think many companies are earning enough to cover maintenance capital expenditures…”

The land drillers also face pricing pressures, possibly for another year or two, according to TPH. About 350 alternating current (AC) rigs are “on the sidelines since the peak.” Meanwhile, the incremental AC rig newbuilds and pad-capable silicone-controlled rectifier (SCR) rigs are stacked or idle, with the total SCR rig count down 330 rigs since the peak. “We don’t believe pricing power returns to the subsector before 2017.”