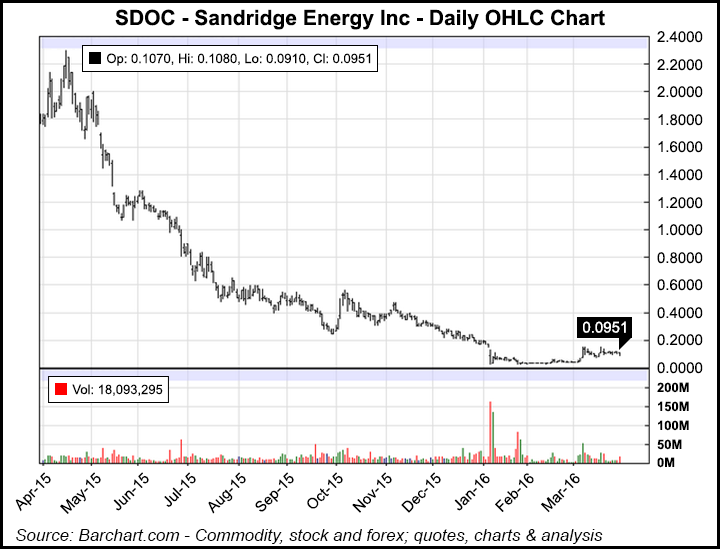 In a Securities and Exchange Commission (SEC) Form 10-K filing, the onshore producer said there was “substantial doubt” about its ability to continue as a going concern. The company’s shares, now trading over the counter under “SDOC,” fell Wednesday and closed at 7 cents/share.

“The company is also focused on cost reductions, including the identification of noncore assets for potential sale.”

Because of uncertainties about whether any restructuring transaction may occur and the “likelihood” of a restructuring or reorganization, “management has concluded that there is substantial doubt regarding the company’s ability to continue as a going concern as it is currently structured.”

SandRidge, formed in 2006 by Chesapeake Energy Corp. co-founder Tom Ward, has principal operations today in Oklahoma and Kansas. At the end of 2015 the company also owned properties in the Colorado Rockies and in West Texas.

“In 2016 we will be reducing capital spending by around 60% compared to 2015, ensuring liquidity while advancing our operations with one rig in each of our plays,” CEO James Bennett said.

Capital expenditures for 2016 have been reduced by 59% year/year to $285 million, with $262 million set aside for exploration and production (E&P).

“Combining high-graded development of our Midcontinent assets with our emerging Niobrara play is resulting in a more diversified company with improved capital efficiencies,” Bennett said.

SandRidge also has reduced its general and administrative expenses, including a sharp reduction in its workforce, “to match our ongoing activity as we preserve and extend capabilities while managing optionality in this challenging environment.”

The company has two rigs running in the Mississippian Lime and one running in the Niobrara formation of Colorado, and expects to run one rig in each area starting in May.

During the final three months of 2015 SandRidge drilled 19 laterals in the Midcontinent and had on average four horizontal rigs in operation. The Midcontinent assets produced 63,700 boe/d during the quarter, 52% weighted to natural gas and 29% to oil.

In the Permian Basin of West Texas, production totaled about 3,800 boe/d in the final quarter, 83% weighted to oil and 7% to gas. Legacy West Texas Overthrust properties produced about 4,800 boe/d, 99% gas-weighted.

SandRidge said it achieved 153% drillbit reserve replacement in 4Q2015, with 46 million boe organic reserve additions. About 80% of total proved reserves are proved developed, it said. The company has identified 2,460 3P — proved, probable and possible — drilling locations in its Midcontinent focus area, and more than 1,300 drilling locations in the Niobrara.

At the end of 2015, estimated proved reserve volumes were 324.6 million boe, based on internal estimates using SEC-mandated historical 12-month unweighted average pricing of $46.79/bbl of oil and $2.59/Mcf of natural gas. The reserves estimates were determined by SandRidge reservoir engineers and not fully assessed by independent consultants, the company noted.

“If the company’s Dec. 31, 2015 reserves estimates were made using the reduced 12-month average prices, and without regard to additions or other further revisions to reserves other than as a result of such pricing changes, the…internally estimated proved reserves as of December 31, 2015 would decrease by approximately 6%, and present value-10 (PV-10) would decrease by approximately $229.0 million, primarily as a result of the loss of proved undeveloped locations.”

If commodity pricing “falls short of the company’s current expectations or rebounds to a level supportive of more drilling, the company may change its 2016 capital expenditure plans again.”

On Jan. 22, the company borrowed $489 million under its senior credit facility, bringing the total amount outstanding to $500 million, including letters of credit. Following the borrowing, the cash balance was about $855 million.