Sanchez Energy Corp. is buying up more of the Eagle Ford Shale, acquiring 11 million boe of proved reserves and 2,000 boe/d of production on 3,600 contiguous net acres in McMullen County, TX. 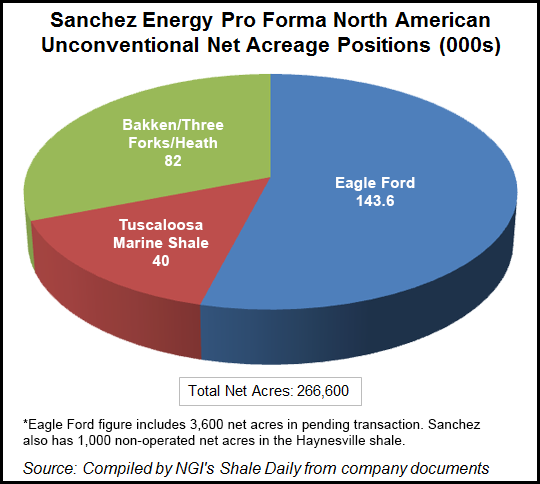 Houston-based Sanchez is paying an undisclosed seller $220 million in cash, subject to adjustments, for what it calls the Wycross assets. This area is adjacent to its currently held Cotulla assets. The company has revised its operating plan for this year to reflect the acquisition and laid out a preliminary plan for 2014.

Sanchez will have an average working interest of 60% in the Wycross assets. Proved reserves are 81% oil and 8% natural gas liquids; their addition grows the company’s midyear proved reserves by 25% at a cost of about $19.65/boe, Sanchez said. The addition of the 2,000 boe/d of production represents growth of about 15% over the current level of 13,500 boe/d.

There are 12 wells producing from the Wycross assets currently, and Sanchez said there are 40 identified proved undeveloped locations based on 60-acre spacing.

“We have used a development drilling plan to assess reserves and valuation assuming well spacing on 60 acres but firmly expect that optimal development will take place with 40 acre spacing, providing additional upside potential,” CEO Sanchez said. “We currently plan to bring a rig suited to efficiently develop this asset later this year. As a result, we are expecting that the current production rate of approximately 2,000 boe/d will stay flat on average for the balance of 2013.”

“Our preliminary 2014 operating capital plan is well within our operational capacity. The new Wycross area is adjacent to our Cotulla area and can be integrated into our operations seamlessly,” the CEO said. “We believe this capital plan along with our high quality asset mix will enable us to double our total annual production volumes from 2013 to 2014.”

The 2013 operating capital plan was lowered from $475 million to $470 million to reflect cost reductions due to drilling and completion efficiency gains from pad drilling. Sanchez plans to spud an additional two wells and complete one additional well in the Wycross area this year.