FERC on Monday approved the expansion (Trains 5 and 6) of Cheniere Energy Inc.’s Sabine Pass liquefied natural gas (LNG) terminal in Louisiana and the expansion of the associated Creole Trail Pipeline. 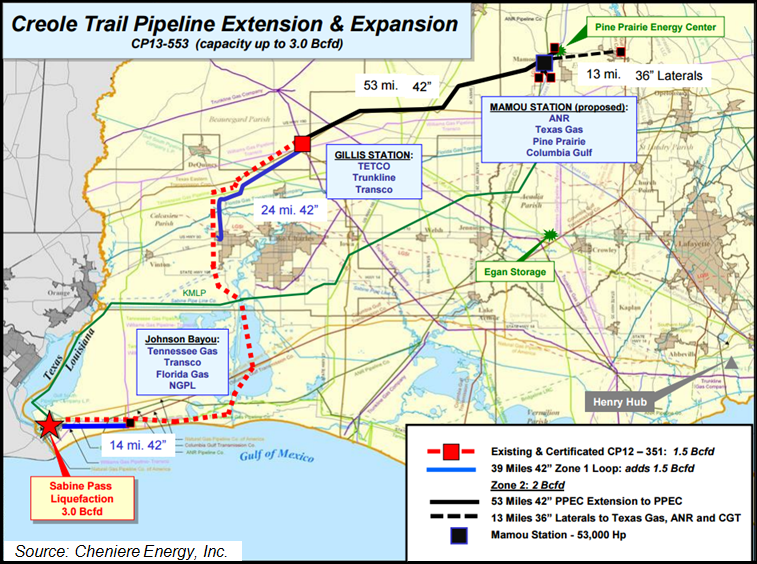 The addition of the two trains would increase terminal export capacity from about 20 million tonnes per annum (mtpa) to about 29 mtpa, or the equivalent of about 4.14 Bcf/d. Sabine told the Federal Energy Regulatory Commission that it has made agreements with Total Gas & Power North America Inc. and Centrica PLC to deliver 101 Bcf and 88.3 Bcf of LNG, respectively, representing most of the capacity of Train 5. Sabine said it is in talks for the sale of LNG from Train 6.

The expansion [CP13-552] is to be located entirely within the existing terminal grounds and does not require additional storage tanks.

The existing Creole Trail Pipeline is being modified to provide up to 1.53 Bcf/d of firm reverse flow service to supply feed gas to the liquefaction plant. The additional Zone 1 facilities would add another 1.5 Bcf/d of capacity for a total of 3 Bcf/d of firm reverse flow capability. The planned Zone 2 facilities would allow for transport of up to 2 Bcf/d of gas between Zones 1 and 2, as well as within Zone 2.

The U.S. Department of Energy (DOE) has authorized Sabine Pass to export 4.14 Bcf/d to free trade agreement (FTA) nations. Sabine Pass holds authorization to export 2.2 Bcf/d to non-FTA nations, according to ClearView Energy Partners LLC, which tracks LNG approvals at FERC and DOE. “Three additional applications to export an incremental 1.38 Bcf/d to non-FTA destinations from Trains 5-6 remain pending at the DOE,” ClearView said. “Consistent with the DOE’s current process, we would not expect the DOE to act on these applications [13-30-LNG, 13-42-LNG, 13-121-LNG] until FERC acts on any potential rehearing requests.”