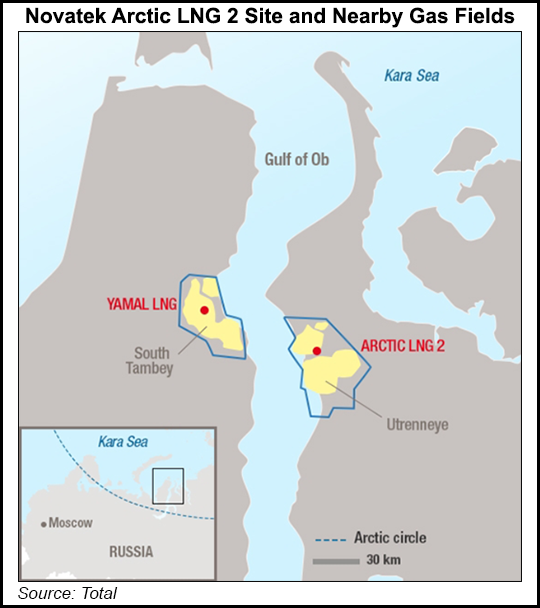 The banks agreed to provide $10.8 billion for up to 15 years for the $21 billion project that is to be located north of Siberia.

The China Development Bank and the Export-Import Bank of China signed credit facility agreements for $2.8 billion, while institutions from the Organization for Economic Cooperation and Development, including the Japan Bank for International Cooperation, agreed to provide the same amount of funding. A syndicate of Russian banks also signed on to provide $5 billion. Other lenders were not disclosed.

Novatek owns a 60% stake in the project, while China National Offshore Oil Corp., China National Petroleum Corp., Japan Arctic LNG and TotalEngergies SE each hold 10%. Novatek said earlier this year that it signed 20-year sales and purchase agreements with the project’s participants for the available capacity.

Arctic LNG 2 includes three trains, with the capacity to produce 6.6 mmty each, that are slated to come online between 2023 and 2026. At the end of the third quarter, Novatek said roughly 52% of the project’s planned capital expenditures had already been financed internally. Overall, the project is 52% complete and the first train is nearly 70% complete.

Russia has utilized its natural resources to gain a larger share of the global gas market in recent years. Arctic LNG 2 would provide access to both the Asia-Pacific and Atlantic basins.

The first Russian LNG plant, Gazprom PJSC’s Sakhalin LNG on Sakhalin Island north of Japan, was commissioned in 2009, while Yamal LNG on the Yamal Peninsula in the Far North produced its first LNG in 2017. Novatek has a 50% stake in that terminal. The facilities primarily supply Asian buyers.Along with Australia and the United States, the country has contributed to the growth in global LNG exports as some legacy producers have seen their output fall. Russia was the fourth largest LNG exporter in the world last year, with 29.6 million tons of volumes, according to the International Group of LNG Importers.