The well efficiencies touted by exploration and production (E&P) companies in some of the star unconventional basins in North America could give the lesser-known names a chance to shine in the coming year, the COO of National Oilwell Varco Inc. (NOV) said Friday. 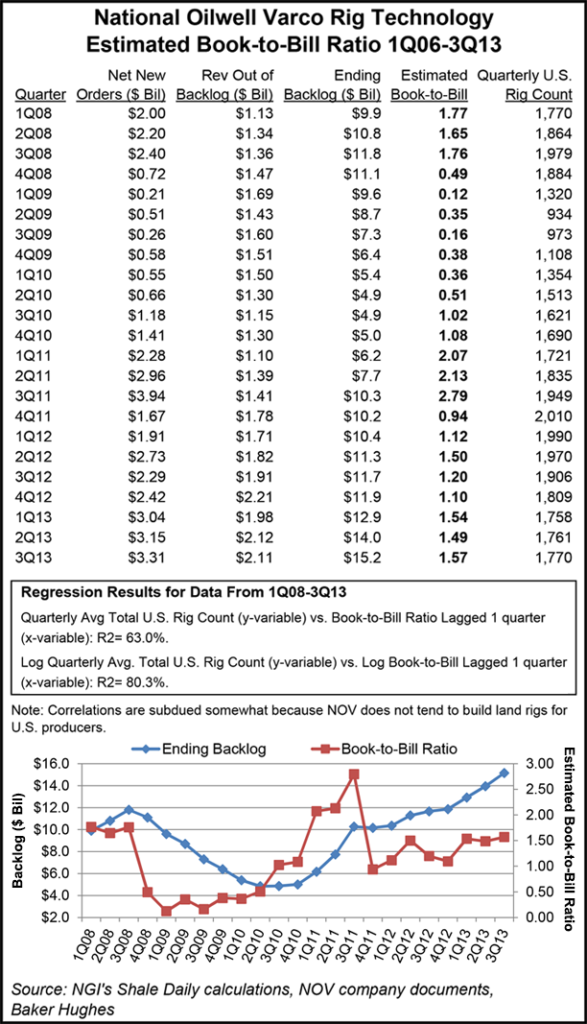 Clay Williams offered NOV’s outlook of the North American market during a conference call to discuss 3Q2013 results. It’s no secret that the rig count is coming down but well productivity is rising — a fact seen for months in producer reports and confirmed by independent analysts and the Energy Information Administration (see Shale Daily, Oct. 22).

That’s not necessarily positive news for the oilfield services industry, of which NOV is a big part. The Houston operator, also a big deal in the offshore, designs, manufactures and sells equipment and components used in E&P operations, and integrates supply chain services to the upstream industry. However, NOV management sees a lot of positives from the well efficiencies, which it in fact has helped to advance.

“Increasingly we see North America become more and more competitive,” said Williams. “This inventory issue has been out there. The fact that the industry has been restructuring and coalescing into this handful of the most profitable basins has created some headwinds” for service providers.

“But, I would add, this rig efficiency phenomenon that everybody’s been talking about, we believe ultimately will grow the pie. It’s going to make some of the less economic basins now more attractive and more economic, and so with ample financial resources and growing economic opportunities perhaps in other basins, we think that’s a pretty good backdrop to see expansion sometime out there in 2014. We haven’t seen it yet, but I think we’re erring with a pretty good backdrop for 2014.

“I would also reiterate that the very intensive nature of drilling and completion operations in the major shale plays is consuming the banks. And so we know that day by day these inventories are being whittled away…”

Many refer to the technology used in the onshore as shale technology, but NOV prefers “unconventional” because it’s being used to crack open “all sorts of rocks,” said the COO. That’s a positive “for everything NOV does or sells…North America…appears to be evolving most rapidly toward a more industrial, efficiency based approach. Rig productivity and well costs are top of the line for E&P customers…”

Only a few years ago dozens of unconventional basins across North American “were being probed,” Williams noted. “Today, these are coalescing down to a handful of the most profitable. So even in a flat rig count environment, the most active basins steadily become more competitive. Oilfield service companies reposition their assets and buy their way into this handful through discounting.

There’s a lot of competition, but NOV’s 2014 outlook for North America is “cautiously positive,” said Williams. “Given a strong oil-driven wellhead cash flow boost to E&P companies, and the relatively low reinvestment rates of the past year, if oil remains near $100, we believe we’ll see more spending in 2014…

“This thesis should be helped by a large inventory of well sites across North America with minimal geological risk and steadily rising takeaway capacity, which tends to enhance producer cash flow at the wellhead.”

The book-to-bill ratio for NOV represents the amount of additions to the backlog divided by the amount of revenue that was booked from backlog during that same period. While the ratio itself will not explain 100% of the changes in backlog from period to period because it does not incorporate things such as turns business (orders taken and filled in the same period), cancellations and order push-outs, book-to-bill ratios above 1.00 generally indicate that backlog grew during its measurement period.

The backlog for capital equipment orders within the rig technology segment, both offshore and onshore, hit a record $15.15 billion at the end of September, 30% higher than a year ago and 9% more than at the end of June. New orders in 3Q2013 totaled $3.31 billion.

NOV recently announced plans to spin off its distribution business, which would create two standalone publicly traded corporations. As separate companies, the distribution business and NOV would have operational flexibility to focus on specific products, services and customers, Miller said.

In the rig technology segment, revenues increased 12% from a year ago to $2.84 billion, with operating profits at $606 million, or 21.3% of sales. Revenue out of backlog was flat sequentially but it rose 10% year/year to $2.11 billion. The petroleum services and supplies unit reported revenues of $1.81 billion, 5% higher from a year ago and 3% more sequentially. Operating profit flow-through was 33% from 2Q2013 to 3Q2013.

The distribution and transmission business, which is being spun off, generated revenues of $1.34 billion, 2% more than a year ago and 4% more sequentially, with operating profits of $78 million, or 5.8% of sales. Operating profit flow-through was 15% sequentially.