After receiving upwards of 5.5 Bcf/d in shipping interest from Appalachian producers during a nonbinding open season launched in January for its east end backhaul from Ohio to Illinois, Rockies Express Pipeline LLC (REX) announced holding a binding open season on Wednesday for the 1.2 Bcf/d it has available on the stretch. 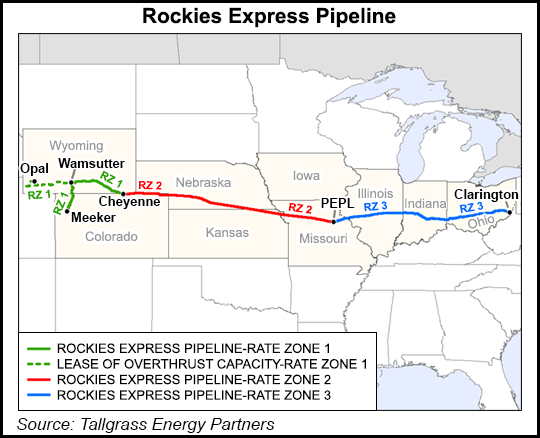 The capacity at the east end of the 1,698 mile pipeline, or Zone 3, which gives producers in the Appalachian Basin east-to-west access to growing markets in the Midwest, is expected to increase. The open season will end next Wednesday (May 7).

A series of third party interconnections and laterals being developed by Tallgrass Energy Partners LP, which half-owns REX with partners Sempra U.S. Gas & Power (25%) and Phillips 66 (25%), is expected to give the pipeline 1.8 Bcf/d of capacity by June 2015, when service is expected to begin.

In related news, at the Utica & Marcellus NGL & Natural Gas Markets & Takeaway Congress in Columbus, OH, Tallgrass Vice President of Business Development Doug Walker said publicly for the first time the company was in the early stages of planning a 120-mile lateral from the REX mainline to Chicago.

The new lateral is being billed as Project Vortex following the brutally cold winter.

REX’s Chicago lateral could be up to 42 inches in diameter and capable of delivering 1.8 Bcf/d to the Windy City, he said. The pipeline stretches from Colorado to Clarington, OH; Tallgrass bought out Kinder Morgan Energy Partners’ share in 2012 with an eye on expanding REX’s backhaul ability (see Shale Daily, Jan. 30).

Spectra Energy’s Robert Riga, general manager of business development, said with current Northeast demand being fulfilled by Appalachian producers, backhaul projects and system expansions are increasingly attractive. Spectra is forecasting growing demand for exports on the Gulf Coast, industrial and power generation demand in the Northeast and Carolinas, and burgeoning markets in Canada.

“From an economic standpoint and an environmental standpoint, it just makes more sense to expand or reverse existing systems,” he said.

Like REX, Spectra’s 250-mile Nexus pipeline, with an expected in-service date of 2017, would give Appalachian producers access to markets in Michigan, including Detroit (see Shale Daily, Sept. 5, 2012). Nexus is to extend into Ontario’s gas trading hub at Dawn. Riga said Spectra would expand existing infrastructure for the Canada expansion.

He said he expects high shipper interest, not only because 10 Bcf/d in physical trading takes place there, but because supplies from Western Canada are declining and storage hubs would help Appalachian producers head-off seasonality.

For information on the REX open season visit REXOpenSeason@tallgrassenergylp.com.