North American natural gas futures for the upcoming winter steadied mid-week at the prospect of cooler weather but have slumped since the start of the month and sit below the $4 mark. The January Nymex gas futures contract settled Wednesday at $3.815/MMBtu, up 10.7 cents day/day. February climbed 10.0 cents to $3.774. 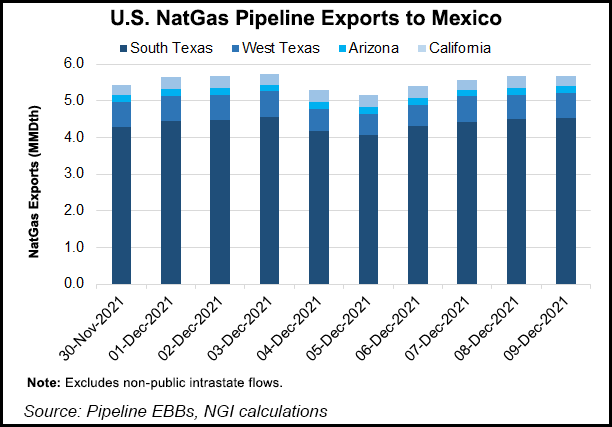 “Consumers who pay a monthly price want to throw themselves out of the window in the face of falling prices,” said a natural gas shipper in Mexico City.

Many natural gas buyers in Mexico have switched to monthly deals as a way to hedge against spot market volatility. Mexico relies on imports from the United States to meet more than 90% of domestic demand, excluding gas consumed by state oil company Petróleos Mexicanos.

After months of concern in Mexico about the natural gas availability and pricing this upcoming winter, the picture has shifted bearish. “With an improved market balance,” Rystad Energy analysts anticipate price levels “will see some relief this Northern Hemisphere winter and next year.”

The U.S. Energy Information Administration (EIA) said on Tuesday it sees Henry Hub spot prices averaging $4.58 from December through February. This is a nearly $1 discount versus the prior month’s forecast, when the agency called for an average price of $5.51 for November through February.

EIA said its Henry Hub forecast spot price “generally declines through 2022” to an average of $3.98 for the full year on rising U.S. production and slowing growth in liquefied natural gas (LNG) exports.

Rystad sees U.S. dry gas production achieving pre-Covid-19 levels of 97 Bcf/d before the end of this year, further increasing to levels above 100 Bcf/d next year. The analyst team also noted that West Texas gas pipeline exports to Mexico dropped from 1.4 Bcf/d in June to 1.26 Bcf/d in November.

“Rystad Energy maintains its view that declines in West Texas exports to Mexico are likely in relation to the redirection of flows away from Mexican markets and toward more favorable LNG markets in the Gulf Coast region. Still, we expect exports will continue to increase in 2022 and 2023 as structural growth is expected in the Permian and no significant declines in demand for gas from Mexico are expected.”

At points key to Mexico trades in South Texas, January futures were up on Wednesday but down week/week. The Henry Hub January contract closed at $3.835, up 10.7 cents on the day, but off from $4.278 last Wednesday (Dec. 1).

Mexico’s Sistrangas five-day line pack average was 6.931 Bcf on Wednesday (Dec. 8), within the optimal line pack of 6.86-7.29 Bcf needed to guarantee sufficient pressure in the system.

Demand on the Sistrangas on Wednesday was 4.686 Bcf, down from 4.709 Bcf a day earlier. Mexico gas production fed into the system was 1.286 Bcf. Southeast production dominated the total, with 730 MMcf/d from the region injected into the pipeline system.

In related news, Mexico Energy Minister Rocío Nahle this week met with officials from Cenagas, which manages the Sistrangas system. A source told NGI’s Mexico GPI that the meeting was around additional natural gas projects, with the potential Veracruz storage facility discussed.

On Thursday, the EIA reported a 59 Bcf withdrawal from natural gas storage inventories for the week ending Dec. 3. The print was exactly the same as the previous week and in line with market expectations.

The South Central region saw stocks fall by a net 14 Bcf, including a 7 Bcf decline in salt facilities and a 9 Bcf drop in nonsalts. Until Mexico develops its own storage capability, this is the storage system most readily available to the country.