Mexico’s industrial center Monterrey was once again picked as the best location for a domestic price index in the fifth survey of the natural gas market undertaken by NGI’s Mexico GPI. 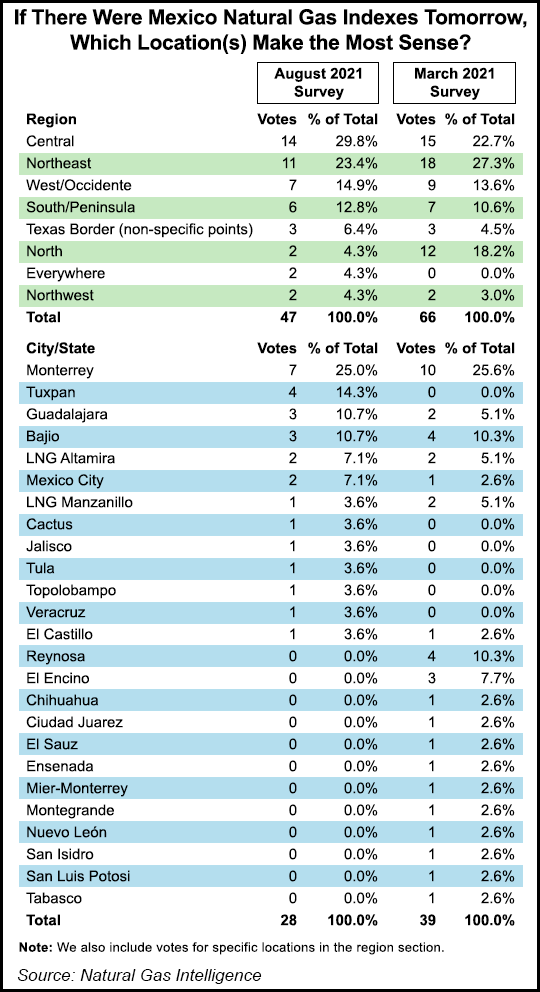 The survey, conducted in August, received 30 responses from buyers and sellers in Mexico, compared to 23 for the March survey.

While most natural gas contracts in Mexico are written based on U.S. prices with cost added for transportation into Mexico, the impetus is growing for an independent Mexico-driven natural gas price index.

“Our intention in the future is that we use domestic prices,” Rodrigo Aranda, trading manager at Mexico City-based power company Fénix told NGI’s Mexico GPI. “In the end though we get most of our supply from the United States, the two markets are separate. And the clearest example of this is February, when Mexican prices skyrocketed because of a winter storm in Texas.”

Some players are already using the daily Mexico Gas Price Index published by NGI’s Mexico GPI. Five out of the 30 responders mentioned they buy and sell at least a portion of their natural gas off NGI’s Mexico GPI.

Aranda cited Monterrey, Bajío and Guadalajara as the best places for indexes given their wealth of industries and power plants. Survey takers also voted for these points, although Tuxpan in Veracruz, which is on the receiving end of the Sur de Texas-Tuxpan marine pipeline, came second to Monterrey.

The massive 2.6 Bcf/d Sur de Texas-Tuxpan pipeline this year became the main importer into Mexico’s gas market, and could be behind a rise in the popularity of monthly trades, according to NGI’s Patrick Rau, director of strategy and research.

[Contribute to Transparency: Are you an active market participant in Mexico? We encourage you to connect with our Mexico team to discuss the development of the market, price methodology and the index there. Email NGI’s Mexico Gas Price Index team at Mexico@NaturalGasIntel.com.]

“If Sur de Texas-Tuxpan is providing more surety of supply, then it’s reasonable to assume that daily balancing isn’t as necessary, everything else being equal,” Rau said.

Daily trading represented just 38% of the market in the latest survey, down from 47% in March and 52% last August. That activity was largely scooped up by monthly activity, which accounted for 50% of total transactions, up from 44% in March.

One Mexico City trader who asked not to be named told NGI’s Mexico GPI that his transactions were entirely in the monthly market, and he suspected that would be the case for most of his competitors.

Deals tied directly to U.S indexes climbed for the third consecutive survey, this time nudging up to 47% from 44%. If you include first of the month basis deals and the First Hand Sales (VPM) mechanism, a formula used by state oil and gas firm Petróleos Mexicanos (Pemex) that is tied to U.S. indexes, the figure jumps to 76%. This is up from 72% in the March survey.

He cited last mile infrastructure and rising natural gas prices as current problems in the natural gas market in Mexico. He also said it was important to be able to count on a continuation of supply and reserve capacity in the United States.

In terms of how deals are structured, negotiated fixed price transactions were just 10% of the total in the latest survey, down from 13% in March, 22% a year ago, and 27% in August 2019. Negotiated bidweek differentials were 16%, down from 20% in March 2021, but in line with the 17% from the prior two surveys.

Mexico imports of U.S. gas have been strong all summer and recently topped 7 Bcf/d for the first time. But according to the survey, this number could jump in the coming years.

Rau suggested that the figures are “overly bullish” and that it is unlikely that the market will grow so quickly in just over three years, even given new pipeline capacity and a growing momentum for liquefied natural gas export projects. Aranda pointed out, however, that the outlook for domestic production was “not good” and that the domestic natural gas market was growing and replacing less competitive and dirtier fuels.

Mexico’s utility Comision Federal de Electricidad (CFE) accounted for 15% of the companies with whom NGI survey responders do business, up slightly from 12% in March and 13% a year ago. Prud’homme said CFE is becoming the main player and “de facto” system operator in the Mexican natural gas market.

“This doesn’t account for actual volumes traded, so even though our survey suggests companies are still dealing with independent marketers at the same pace they were in March, it’s certainly possible CFE and Pemex have taken some of their market share,” Rau said.