Natural gas forward prices recorded a third straight week in the red as weather models continued to show variability in the forecasts, rather than sustained cold. 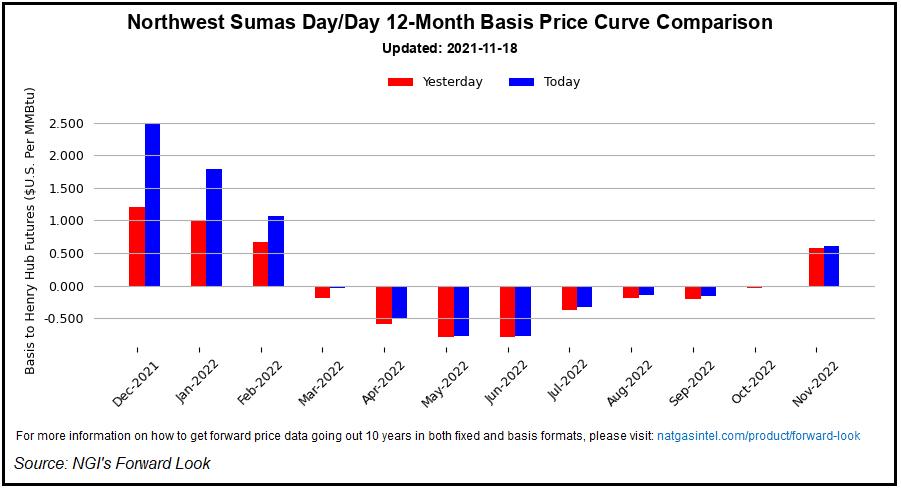 Liquefied natural gas (LNG) demand, meanwhile, neared all-time highs as production fluctuated but stood well off summer lows. All the gyrations in the supply/demand balance left the December forward prices off 34.0 cents on average for the Nov. 11-17 period, while losses of more than 20.0 cents extended through the remaining winter months, according to NGI’s Forward Look.

Beyond the peak winter season, price declines were less pronounced. Still, the majority of U.S. locations fell below the $4.00 mark for the summer 2022 strip (April-October) given the improved storage picture in the Lower 48.

There were a handful of U.S. markets in the West that bucked the overall pricing trends, however. Huge gains mounted on concerns over the duration of a pipeline issue in Western Canada that was reducing imports into the Pacific Northwest.

At issue is a steep reduction in T-South flows on the Westcoast Energy pipeline system that transports gas from Western Canada into the Pacific Northwest. Pipeline operator Enbridge Inc. said heavy rainfall and severe flooding in southern British Columbia (BC) necessitated T-South flows to be cut by about 392 MMcf.

Cash markets reacted swiftly to the news. Northwest Sumas and Malin gained north of $1.00 over a three-day span, with both pricing hubs sitting above $6.000 by Thursday.

The gas flow reduction occurred after Westcoast isolated and depressurized the segment of the pipeline’s 30-inch diameter 8AL1 pipeline between Station 8A and 8B as a precautionary measure. On Thursday, Westcoast said crews were working to assess the pipeline segment impacted by the flooding of the Coquihalla River. Given the adverse conditions and effort required, “access and assessment may take several days,” it said.

“Westcoast currently expects authorized T-South capacity to remain at or near current levels until next steps are determined,” the pipeline said. Daily communication updates and capacity information are to continue “until longer-term impacts and work plans can be estimated with reasonable confidence.”

With memories of a prior Westcoast flow reduction on the minds of forwards traders, hefty premiums were added through the winter. Northwest Sumas January fixed prices climbed 60.0 cents from Nov. 11-17 to reach $6.709, while the basis price rallied 93.0 cents to plus $1.795. The balance-of-winter fixed price, meanwhile, stood Wednesday at $6.120, up 47.0 cents over the period.

Despite the downstream constraint facing Westcoast, Wood Mackenzie gas analyst Quinn Schulz said gas would have the option to ship east on the northern part of the pipeline via an unconstrained Alberta border, which had an available capacity of roughly 224 MMcf/d as of Tuesday. Westcoast interconnects with Nova Gas Transmission Ltd. (NGTL), TransCanada Mainline and Alliance Pipeline at this border.

“It’s likely that Westcoast will ship onto NGTL in order to flow gas into the Pacific Northwest via Foothills BC as the flooding remains closer to the Vancouver region and away from the BC/Alberta border,” Schulz said. “The segment of pipeline that Westcoast has isolated begins near Kingsvale and ends near Hope in British Columbia, just north of the Sumas interconnect in Sumas, WA.”

Nevertheless, traders clearly started to price in a worst-case scenario, and with good reason. The 2018 Westcoast explosion and subsequent flow reductions at Sumas lasted for more than a year, with Canadian regulators not clearing full service on the pipeline until December 2019. Before the approval, though, the 200 MMcf/d flow reduction fueled Sumas prices to a $161.33 high on March 1, 2019.

It was far less exciting for other U.S. forwards markets, as another week passed without indications of truly frigid weather showing up in the country to drive up demand.

Bespoke Weather Services said overall, the pattern is still considered seasonal for the coming 11 days as chilly weather systems track across the northern United States. However, there are milder breaks in between the cold blasts, and the early part of December also looks rather comfortable.

“Our stance is that we will need some decent cold to support prices near the $5.00 level, but it remains very early in the season to remove winter premium as we sit close to normal,” Bespoke said.

NatGasWeather said longer-range models are not providing much for bulls to hang their hats on either. The pleasant weather pattern is seen continuing through Dec. 20 “for a bearish lean, according to the forecaster.

“But as we all know, things can change quickly” and is why each new weather model run is likely to be “closely scrutinized,” NatGasWeather said. “To our view, the onus is on colder patterns coming through for much of December to prove demand will be strong enough to justify current high prices.”

The lack of strong cold has had a material impact on the supply situation, which was remarkably dire only a few months ago. Though the traditional storage injection season officially ended at the end of October, injections into underground storage have continued.

On Thursday, the Energy Information Administration (EIA) said stocks for the week ending Nov. 12 rose by 26 Bcf, lifting inventories to 3,644 Bcf. The injection, seen by most analysts as the final build before withdrawals begin, came in close to consensus.

Ahead of the EIA report, major surveys showed injection estimates ranging from the teens to the low 30s Bcf. The 26 Bcf build compared with last year’s 28 Bcf injection, while the five-year average is a 12 Bcf withdrawal.

Broken down by region, the South Central added a net 16 Bcf into inventories, including 10 Bcf into nonsalt facilities and 7 Bcf into salts, EIA said. Midwest stocks rose by 4 Bcf, while East and Pacific stocks added 3 Bcf apiece. The Mountain region was the only one to report a withdrawal, with inventories slipping 1 Bcf.

Total working gas in storage as of Nov. 12 stood 310 Bcf below year-ago levels and only 81 Bcf below the five-year average, according to EIA.

With some chillier temperatures on the way, EBW Analytics Group said the end of repeatedly bearish weather of the past two months and the transition into the more supportive paradigm underlies a bullish pivot in the storage trajectory versus the five-year average. At the same time, LNG feed gas demand may trend higher as Freeport operational issues are resolved and new trains continue to ramp up demand.

On Thursday, NGI data showed feed gas deliveries bumping up about 0.6 Bcf day/day to around 11.8 Bcf as deliveries to the Freeport terminal increased.

Meanwhile, pipeline scrapes indicate early November production growth was already tapering off, according to the EBW team. The analysts noted that pipeline scrapes are often directionally correct but highly imprecise.

To that end, Bespoke pegged output at around 92 Bcf on Thursday, while Bloomberg data showed a much plumper production level of close to 95 Bcf.

EBW said the coincident timing of colder weather and December contract options expiration and final settlement sets up the potential for the return of heightened volatility. Potentially significant gains could be achieved over the next 10 days.

“Natural gas prices have risen on final settlement day in 11 of the past 12 months, lodging an average daily price increase of 11.2 cents,” EBW analysts said. “Continued cold weather into the first half of December remains likely to provide further support for the Nymex front month.”

The December Nymex gas futures contract settled Thursday at $4.902, up 8.6 cents on the day but off the $5.032 intraday high reached earlier in the session.