Raymond James & Associates has increased its 2017/2018 West Texas Intermediate oil price forecast by $5.00/bbl, but cautioned that given the U.S. unconventional industry’s ability to post efficiency gains, the bias over time is for prices to move lower. 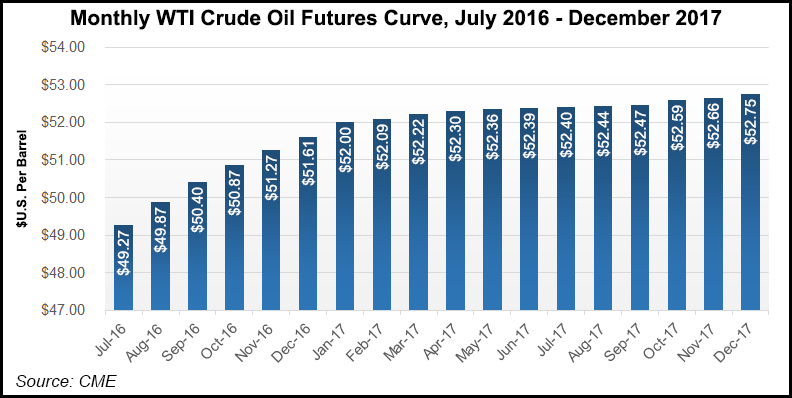 At the beginning of 2016, Raymond James energy analysts had forecast WTI/Brent would average $75/$79. In early February, they had forecast WTI would reach $50/bbl later this year in the face of a futures strip that was considered “simply unsustainable” (see Shale Daily, Feb. 8).

“While our oil price bias is still to the upside for 2017, the U.S. oil and gas industry will work through the pending bottlenecks, and oil prices beyond 2017 should slowly revert down to a lower, more sustainable long-term price equilibrium,” analysts said. “In other words, we expect the oil futures markets will move into steeper backwardation (or lower outer year prices) as 2017 oil prices move higher.”

According to a report by Bloomberg, analyzing the breakeven prices in Bakken, Eagle Ford and Permian counties, about half of these major oil producing counties become profitable above $40/bbl, where prices are today.

“The lowest breakeven costs in the country were found in the Reeves, TX,” in the Permian Basin, where some of the Wolfcamp formation is found, Harrison said. “All counties they analyzed were profitable above $64/barrel. Although the analysis left out other major oil producing regions, such as the Niobrara (Denver-Julesburg) and the Oklahoma stacked plays, it seems fair to say that the supply-side response from $60-plus oil would be large and the $80 prices forecast from Raymond James could bring on a large-scale boost in U.S. production, assuming producers can meet the demand. One of the assumptions Raymond James had was that they wouldn’t be able to do so fast enough.”

One issue for long-term forecasts is the fact that it is going to take time to “fix the damage” to the energy industry caused by the severe downturn in pricing.

“While future U.S. efficiency gains could easily drive the long-term equilibrium price deck lower than $70, we remain of the view that $50 to $60 would definitely not support a sustainable level of global investment for the long run,” Adkins said.

“We continue to believe that 2017 WTI oil prices will average about $30/Bbl higher than current futures strip prices would indicate,” Adkins said. “When we factor in modestly higher 2016 global oil demand growth, our global oil model has become meaningfully more bullish (or tighter).”

Since Raymond James issued its forecast in January, the 2017 oil supply forecast has declined by 790,000 b/d, while the 2018 forecast has fallen by 1.4 million b/d. A big supply side issue is that the length and severity of the downcycle has created a lot of U.S. oilfield bottlenecks, created in part by average initial production rates climbing 30%-plus each year since 2011.

“As a result of increased productivity…many U.S. oil resource plays are offering some of the best field-level economics outside the Persian Gulf,” analysts said of the U.S. onshore. “It is also the case that U.S. onshore operations are a textbook example of ‘short-cycle’ activity. As prices rise into the $50-60/bbl range and beyond, operators will naturally respond by adding rigs. But there is no escaping the fact that the length and severity of the downturn have changed the landscape across the oil patch, resulting in numerous bottlenecks that will limit the extent to which drilling activity can accelerate.”

The “short-cycle” could result in a year or more before domestic output begins to respond to higher oil prices. Oilfield services and producers initially will choose to move cash flow toward balance sheet repair rather than to maximize growth. Also, the limited labor pool — combined with low U.S. unemployment — may make it difficult to undo the massive layoffs. As well, there will be shortages within the pressure pumping market because of cannibalization and attrition.

“While production efficiencies and a large inventory of drilled but uncompleted wells will certainly help U.S. supply growth, the aforementioned bottlenecks are real and must be taken into account,” Adkins and Molchanov said. The net impact to their model “is more subdued U.S. oil/liquids production growth, especially in 2018, versus our expectations from six months ago.”

Meanwhile, Societe Generale analysts Michael Wittner said last week the outlook for global oil fundamentals remained constructive, with slight global crude and product draws expected in the second half of this year, but “the current mood in the oil markets is risk averse,” with the most recent Energy Information Administration petroleum report doing little to change the sentiment.

“The U.S. crude draws continue to be nothing more than seasonal, and Canadian crude production is also recovering,” Wittner said. U.S. product demand “has been surprisingly strong,” but the Federal Reserve Bank’s “cautious tone” at last week’s meeting “tells a different story, and it seemed to resonate with the markets….” In addition, the referendum this week regarding Brexit, whether Great Britain leaves the European Union, has contributed to overall risk aversion and is weighing on the oil complex. “In the next week, it is becoming difficult to see how this will change.”