Given that domestic production has been “through the roof” this summer, analysts with Raymond James & Associates on Monday adjusted natural gas prices lower for the fourth quarter, for 2015 and the longer term. 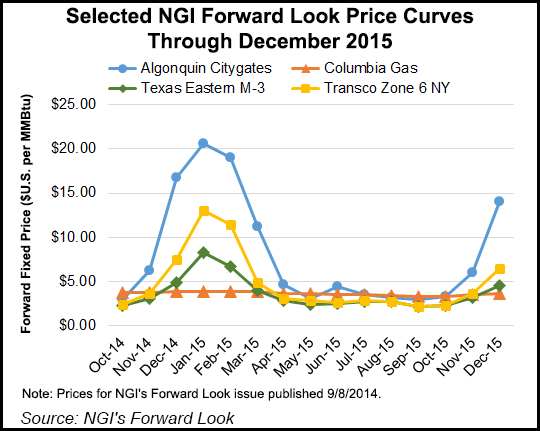 “The reality is that U.S. gas producers are finding ways to bring online staggering amounts of natural gas at prices well below $4.50,” wrote analysts J. Marshall Adkins and Edward Rowe. “More importantly, these lower gas drilling breakeven costs are likely to fall even further over the next few years as operators continue to drive better gas production efficiencies.

Adkins and Rowe said there are, of course, wildcards to their lower price decks, including that old standby, weather, as well as wider basis differentials, and coal switching, all of which could cause price deviations one way or another. However, they advised investors to focus on the fact that the United States should see robust gas supply growth outpacing improving demand into 2016.

“While U.S. gas consumers are busy building infrastructure that can take advantage of this cheap and plentiful fuel, they simply can’t build it fast enough,” wrote the duo. “That means U.S. gas supply is poised to meaningfully outpace demand over the next few years.”

“As it stands now, our gas model is showing U.S. summer ending gas storage (Oct. 31) at a relatively bullish 3,450 Bcf level (versus a five-year average above 3,800 Bcf). That said, if the weather normalizes over the next year, we have October 2015 exiting the injection season above 4,000 Bcf, which is relatively bearish. Since the market is forward looking, we expect downward pressure on U.S. natural gas prices to occur until weather convinces us otherwise.”

Without colder-than-normal weather this coming winter, it may be another ugly season for gas prices, said the analysts.

The Raymond James gas model for 2015 now is indicating that gas supplies should outpace demand by around 2.5 Bcf/d, driven by production growth of 3.5 Bcf/d year/year and 2.3 Bcf/d less demand from 2014 because of expected normal weather. Other variables include lower net Canadian imports, increased industrial demand, higher Mexican gas exports and increasing coal-to-gas switching.

“While a number of longer-term natural gas demand projects are expected to help the supply/demand balance eventually, 2015 demand will be unable to keep pace with supply, driving U.S. natural gas prices lower for longer than what is currently priced into the market,” said analysts. “Based on our assumptions, we estimate 2014/15 winter storage to end at 1.3 Tcf (assuming normal weather) and 4.0 Tcf at the end of summer 2015, which should keep gas prices sub-$4.00 through the year.

“At those storage levels, we would likely be testing full storage capacity in the back half of the year, something that has only really been observed once — in 2012.”