While acknowledging that rail shipments are a vital part of the burgeoning Bakken Shale play, North Dakota energy officials on Monday refused to speculate on the eventual impact of the oil rail car derailment and fire in Quebec, Canada, on their state’s soaring production (see Shale Daily, July 16). 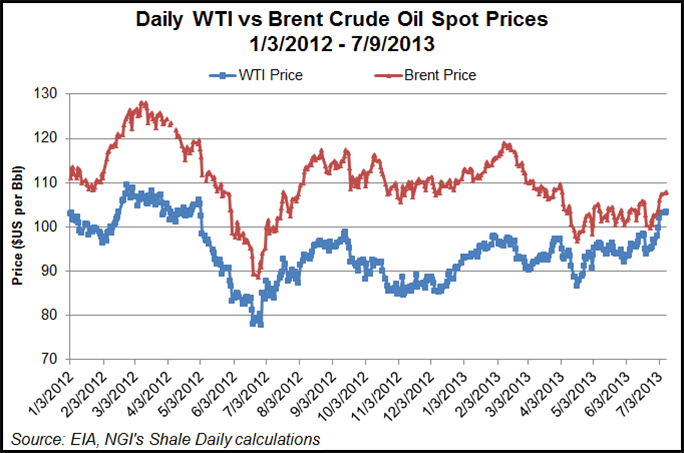 “North Dakota is extremely dependent on rail transportation,” said Lynn Helms, director of the North Dakota Department of Mineral Resources (DMR), noting that he was unaware of shippers in his state now facing higher rail transportation rates as a result of last week’s accident, which devastated a town, killing dozens of people.

“Continued shipment by rail is critical to continued development and production growth in North Dakota. We’re very closely watching the situation,” Helms said, adding that rail transport price differentials and lower prices would have a dampening effect on the state’s robust oil/gas production.

North Dakota boasts 22 railroad oil loading facilities that collectively could theoretically move up to almost 1 million b/d, according to Justin Kringstad, director of the North Dakota Pipeline Authority. Most recent statistics showed a slight drop in the proportion of oil shipped by rail — from 70% to 69% — leaving the most recent rail volumes at 640,000 b/d, Kringstad said.

The major factor on the proportion of oil shipped by rail from the Bakken/Three Forks formations is the difference between domestic oil (WTI) and global (Brent) prices, and in recent months that differential has narrowed quite a bit, contributing to the slight decrease in volumes shipped by rail, Kringstad said.

Analysts are forecasting a widening of the WTI-Brent price spread, which would mean more emphasis on rail shipments, Kringstad said. A look at Energy Information Administration data shows that while Brent was trading at a $14.01/bbl premium to WTI on July 9, 2012, the spread has collapsed over the last year. The Brent price on July 9, 2013 was only $4.44/bbl higher than WTI.

Longer term, the ratio of pipeline-rail transportation in North Dakota will be largely driven by market conditions: “what kind of market refining prices are out there and what kinds of transportation options are in place,” said Kringstad, adding that there are no technology breakthroughs on the horizon that will change the ratio.

The state has adequate pipeline and rail transportation for oil, given recent expansions. “The question is determining which markets, what kind of pricing, and how do we get oil to the right markets at the right price,” Kringstad said.