While rail transport of crude oil is getting a lot of attention these days, railroads are playing a bigger part in the larger U.S. domestic energy expansion, as BNSF Railway Co.’s $4.3 billion capital budget for 2013 indicates. 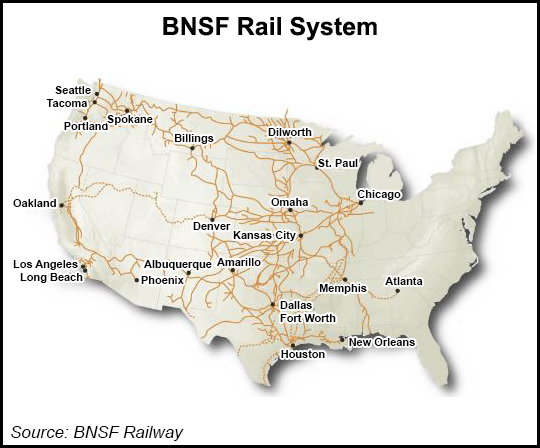 North American shale plays are as much a part of the business plan for the Berkshire Hathaway rail system as they are for major exploration and production companies, a Fort Worth, TX-based spokesperson told NGI on Wednesday. BNSF is currently averaging seven or eight crude-carrying trains daily from all the shale plays. It also ships a lot of materials for onshore drilling.

While the future of continued robust growth in railing domestic crude oil supplies has come into question following the Quebec oil tanker car derailment in July, the transporters don’t see a slowing trend longer term. The tragedy in Lac-Megantic has led to increasing environmental push-back on rail delivery of coal and oil, compounded by narrowing regional crude oil price differences. These factors have sparked questions about impacts from the wellhead in the Bakken Shale in North Dakota.

RBN Energy Inc.’s Sandy Fielden told NGI last week that the narrower differentials between West Texas Intermediate (WTI) and Brent crude prices have cut rail transportation. However, longer term he sees that reversing, as the price spreads again widen and provide more opportunities for rail oil transport by the middle of 2014. Until then, a lot of continued volatility and big swings in prices are expected.

“We expect the price differentials between the inland areas and the two coasts will widen to cover the transportation costs,” Fielden said. “Right now there are a lot of moving parts with the U.S. increasing production and replumbing of the whole crude oil distribution system, so it will take until the middle of next year for things to sort themselves out to the extent that we will start seeing some kind of consistency in relationship to crude locations and prices.”

Traders also expect the spread between WTI and Brent prices to widen in future months, which should make U.S.-based crude a bit more attractive to North American buyers, everything else being equal.

BNSF operates 1,400 trains, which carry a multitude of products every 24 hours over the 32,500 miles of track. “We are also continuing to set new records for domestic intermodal traffic that moves in many of the same lanes as the crude-by-rail traffic,” the spokesperson said. “BNSF not only transports crude by rail, but also moves a great deal of materials and equipment for the oil and gas sector, such as sand,” which is a hydraulic fracturing proppant. For every new well in a play like the Bakken Shale in North Dakota, BNSF ships 40 carloads of inbound materials, including pipe, to well sites. “The materials originate across the railroad’s network.”

Officials in North Dakota have indicated that it is too early to see if the recent rail developments put a dent in Bakken oil marketing, which depends on rail to reach markets, east and west from the Williston Basin. Given the legal and government inquiries into the Quebec incident, few in North Dakota know what, if any, alternative means have emerged for keeping the flow of Bakken crude moving at its increasingly brisk pace.

Bakken producers remain the dark about the long-term consequences, said North Dakota Pipeline Authority Director Justin Kringstad. The authority tracks shipments from the Williston Basin. It will be another month until North Dakota has July production numbers and rail transport statistics available, he said. But even those statistics won’t have any indicators of how much Bakken crude is going to any particular refinery.

In fielding questions about oil volumes moving to Eastern Canada via rail, the Canadian National Railway (CNR) declined to give any information, citing “competitive and confidential” reasons. Montreal, Maine & Atlantic Railway (MM&A), the railroad involved in the accident, has filed for bankruptcy protection. However, on a 2Q2013 earnings conference call last month, CNR Chief Marketing Officer Jane O’Hagan told analysts that “rail is going to be a permanent part of transportation of crude to the marketplace,” because of its “optionality, in terms of being able to move quickly between markets, and the value proposition [compared to pipelines] is complementary.” The positive view is “supported by customers, and we continue to work on delivering our longer-term initiatives, building out that infrastructure to deliver those volumes.”

In similar questions posed a recent conference call, Union Pacific’s senior managers said they had not seen any impact at a major oil loading rail facility from the WTI-Brent price tightening. “We’ve seen some minor impact in our Texas business where there are a lot of pipelines,” said operations chief Lance Fritz. Most of the impact has been in its short-haul business. Longer term, Union Pacific executives said customers are interested in expanding destination terminals, particularly in California where declines of crude from traditional sources, such as Alaska, are causing rail customers to look for oil supplies in Western Canada and the United States.

In the Pacific Northwest, plans are moving ahead for two major new oil rail receipt terminals, including the proposed 360,000 b/d terminal at Port Vancouver, WA. Environmental groups have opposed the rail plans, but the prospects of new jobs and economic growth has held sway with policymakers.

Owned by Omaha-based billionaire Warren Buffett, who also owns a network of energy utilities, BNSF expects to serve 35 destination facilities by the end of this year, offering service to 30% of the U.S. refineries in 14 states, according to the spokesperson. While BNSF does not segment its capital budget by the different commodities being shipped, it breaks down the investments by state, noting recently that this year it plans to spend $220 million in North Dakota and $115 million in Montana — states where the crude oil shipments are increasing.

“We expect the improvements to support all of the Bakken shale unit train traffic,” BNSF’s spokesperson said.

An oil storage and transporter in the Bakken, Global Partners LP CEO Eric Slifka talked about continued expansion programs during a recent 2Q2013 conference call. He said the Columbus, ND transload rail terminal’s 170,000 bbl storage capacity expansion should be completed in early 2014, and a 280,000 bbl storage facility in Beulah, ND will start operations by the end of this year.

“Pipeline capacity expectations haven’t changed, and there is still going to be a need for rail in this game as oil comes out of the ground in these developing plays,” said Global Partners COO Mark Romaine.