Qatar announced Monday that it would withdraw from the Organization of the Petroleum Exporting Countries (OPEC) to keep its focus on liquefied natural gas (LNG), its main export product. 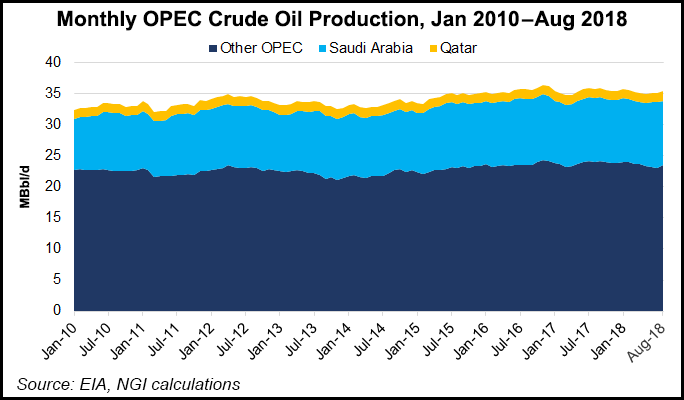 The No. 1 global LNG exporter has been an OPEC member since 1961, but its oil output accounts for less than 2% of total output at around 1 million b/d. However, Qatar is a giant in the natural gas world. Combined oil and natural gas, which it supplies via pipeline and through LNG exports, is around 4.8 million boe/d, noted Energy Minister Saad Sherida al-Kaabi, who announced the news.

“Achieving our ambitious strategy will undoubtedly require focused efforts, commitment and dedication to maintain and strengthen Qatar’s position as the leading LNG producer,” al-Kaabi said. “I would like to reaffirm Qatar’s pride in its international standing at the forefront of natural gas producers, and as the biggest exporter of LNG.”

Qatar owns most of the North Field, considered the largest natural gas field in the world. It shares the field, nearly as large as Qatar, with Iran.

Al-Kaabi said the decision is centered around state-owned Qatar Petroleum’s (QP) long-range plans to increase its gas production, initially announced in September. Plans are to develop additional gas reserves in the North Field to increase liquefaction capacity by 43%.

QP plans to add a fourth liquefaction train to raise capacity from the field to 110 million metric tons/year (mmty), up from 77 mmty.

QP’s total production capacity from the expansions would increase to 6.2 million boe/d.

The expansion is underway with various activities ongoing, including the front-end engineering and design, i.e. FEED of the onshore facilities, which is being executed by Japan’s Chiyoda Corp. The engineering, procurement, construction and installation contract for the offshore wellhead jackets was set to be awarded before the end of this year.

QP, which supplies about one-third of the world’s LNG, last summer lifted a decade-long moratorium on North Field development to potentially increase its gas output. A petrochemicals project also was launched for the region, including plans to build the largest ethane cracker in the Middle East.

Al-Kaabi in his announcement did not mention the country’s difficult relations with OPEC’s leader Saudi Arabia, which led a blockade against Qatar last year. A Saudi-led coalition implemented the blockade in June 2017 after accusing Qatar of funding extremist groups.

Qatar is the first Middle Eastern nation to exit OPEC, which was formed in 1960. OPEC is scheduled to hold a regular meeting of its members and allies later this week in Vienna to discuss oil production quotas.

Natural gas futures prices strengthened Thursday after the latest government storage data pointed to continued tightness in the market. The May Nymex contract settled at $2.749, up 5.7 cents from Wednesday’s close. June climbed 5.5 cents to $2.831. Spot gas prices were mixed, but fell off sharply on the East Coast as the coldest temperatures…