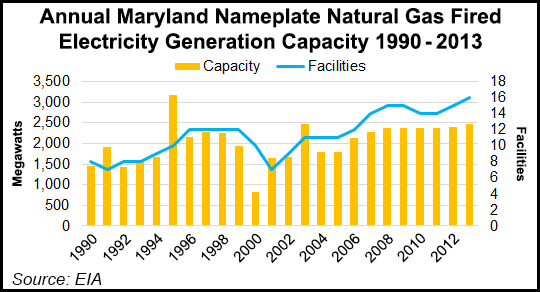 PSEG Power plans to rename the facility PSEG Keys Energy Center (KEC). The $825-875 million plant, to be built in Prince George’s County, MD, is scheduled to be completed and online by 2018. It was bid into and cleared the PJM Interconnection capacity auction in May 2014, and the Maryland Public Service Commission approved the project in October.

Plans call for two gas-fired turbines and one steam turbine at a site near Brandywine, MD. The plant would connect to a Potomac Electric Power Company/PJM 500 kv transmission line adjacent to the property.

As for the fuel to power the plant, “PSEG Power has a firm gas transportation contract on the Dominion Cove Point Pipeline, which commences at an interconnection with the Transco pipeline in Virginia,” a PSEG spokesman told NGI.

“The new plant offers a strong operational and financial fit for PSEG Power’s balanced generation portfolio and will expand our footprint in our core PJM market,” said PSEG Power COO Bill Levis. “This is an opportunity to add to the reliability of the energy grid, provide clean energy to Maryland and create new jobs and economic activity locally and within the region.”

PSEG Power subsidiary PSEG Fossil is to oversee construction, operate and maintain the plant, which is expected to generate 700 jobs during the two-year construction phase and more than 20 permanent jobs once it becomes operational.