Project Canary, an environmental monitoring company, is in discussions with U.S. liquefied natural gas (LNG) terminal operators and buyers as demand has increased dramatically for cleaner energy across the globe. 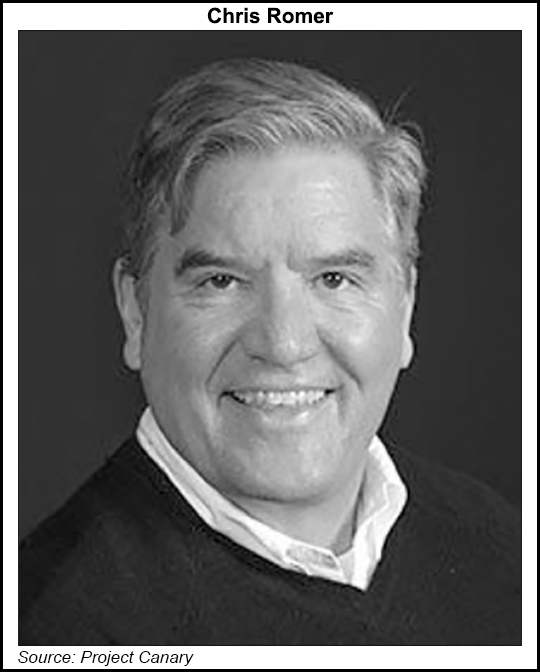 The company is working with more than 20 U.S. upstream, midstream and downstream natural gas operators to measure hundreds of data points that certify the conditions under which gas is produced, delivered and consumed to gauge environmental impacts and risks across four categories including water, air, land and community.

Project Canary CEO Chris Romer said the Denver-based company is receiving “incredible inbound interest” from the LNG sector as countries across the world are increasingly targeting their emissions. Both responsibly-sourced natural gas (RSG) and net-zero natural gas are the future of the industry, Romer said.

NGI: EQT Corp., the largest gas producer in the United States, announced a pilot program with Project Canary in January to demonstrate that the fossil fuel can be produced in an environmentally responsible way. What does that say about the future of natural gas?

Romer: I think natural gas has an incredibly strong future. I’m a big believer that LNG and natural gas are a huge component of climate change mitigation. I think the future is incredibly bright if we do the right thing, which is stop the methane leaks. I think there’s an incredible opportunity to take the cleanest carbon on the planet from the United States all over the world, but it’s going to have to be based on really clear, transparent environmental, social and governance data.

There is a European LNG offtaker that has agreed to buy a portion of the natural gas produced during the EQT pilot project. That was done for a reason. There are a lot of people in Europe who are very much focusing on this issue.

NGI: Is there any direct interest from the LNG sector in Project Canary’s services?

Romer: We are in negotiations with six different LNG companies, a combination of U.S. liquefaction terminals and buyers, including some that want us to monitor their liquefaction trains.

We’re new to this. We have yet to actually monitor an LNG train, but we’ll very shortly be doing that, and I think it’s going to be a big point of focus going forward.

The biggest thing that has shocked me in the last month or so is the incredible inbound interest regarding LNG. It is happening way faster than even bids for RSG from U.S.-based utilities. The largest request that we have right now is from an LNG buyer who wants to lock up 1 Bcf/d of RSG before prices go higher.

NGI: Do you think the push toward “green” energy products in places like Europe will ultimately be a primary driver of environmentally differentiated natural gas?

Romer: Absolutely. I think relatively quickly, you’ll see many countries that will not only ask for RSG, but certified net-zero emissions natural gas. The United States has the cleanest carbon on the planet, but we have to prove that it is instead of hypothetically arguing that it is. At the same time, all these other exporting countries like Qatar and Australia are going to have to live by these certification standards too.

If we can stop methane leaks in the oil and gas and agriculture sectors, it will buy us the time we need to lower the carbon footprint of our economy. I absolutely think that if the U.S. natural gas industry focuses on this, we will not only be leaders, but we will outcompete and win this battle for green LNG. But we need to start getting with the program, and the Biden administration’s goals, and start pushing this as the cleanest carbon on the planet. It’s a winning strategy, but the problem is that the industry is still a little bit in denial.

NGI: Will certified natural gas be the norm as the energy transition intensifies?

Romer: Within 24 months, I think it will be table stakes. There will be more valuable certified RSG and conventional natural gas that trades at a discount. There have now been 15 trades done where somebody has paid a premium for certified gas. Our company has certified gas in 13 of those 15 trades. The premiums have been as low as 3 cents to as high as 11 cents above benchmark prices.

NGI: Will certified gas always be sold for a premium?

Romer: I think there will be a premium market for at least three to five years. Beyond that, I don’t know. I would point out that there are differentiated products now in other markets like different quality oils that trade at various prices.

NGI: Do you believe that companies can credibly certify their own operations internally?

Romer: Let’s be clear. Fossil fuels have a brand problem. There’s a generation of young people who think fossil fuels are going away. That’s a mistake. This industry needs trusted, independent data. It’s not going to be able to self-certify its way back into the future. We will not be the only ones. This is not about a monopoly for us; this is about a reality check for an industry that has a brand problem.

Romer spent more than two decades developing energy infrastructure and private-public partnerships with investment banks, including Citigroup Inc. and JPMorgan Chase & Co. He was also a Colorado state senator from 2006-2010.