Three storms in March failed to deter oil and natural gas operations in North Dakota, which set new all-time highs for the month, according to the latest statistics from the state Department of Mineral Resources (DMR). 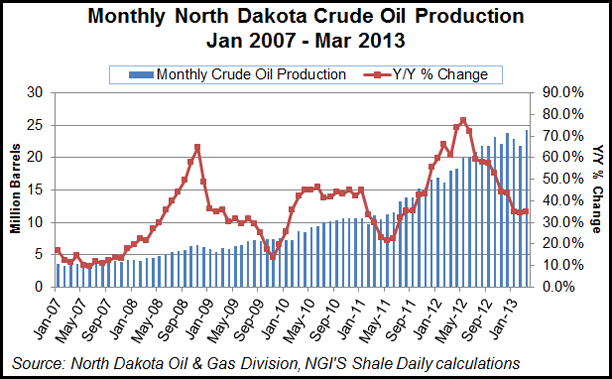 “Gas production increased much more rapidly than oil production did,” Helms said. “It about tripled the rate, so what we saw in our studies last year is actually occurring; as the wells mature there is more and more gas production coming out of those wells. That continues to be a challenge in terms of the flaring issue,” which in March was unchanged at 29%.

“We didn’t really expect to make any significant progress on flaring in March, but we think that is going to come in the next few months. By the middle of the year we hope to be caught up on connections so we will be hooking up wells [to gas processing systems] as fast as we drill them.”

Until recently, new natural gas midstream infrastructure construction was at “a virtual standstill,” said Helms. However, with U.S. gas storage now 5% below the five-year average, it indicates “the price has bottomed.” He still expects low gas prices to linger.

Operators in the Bakken and Three Forks formations appear to be “picking up the pace” ahead of summer, with the rig count as of Wednesday hitting 193, compared to 186 in April. North Dakota’s all-time high rig count was last May at 281, but it’s not expected to exceed 200 this year, said Helms.

Because of the storm activity, well completions in March dropped by 30 to 140. At the end of March there were about 440 wells waiting on completion.