Campaigns to shift consumers away from natural gas and toward renewables such as solar and wind are directed at substantial environmental benefits. However, the process could exact a punishing financial toll on poor Americans, a new study found. 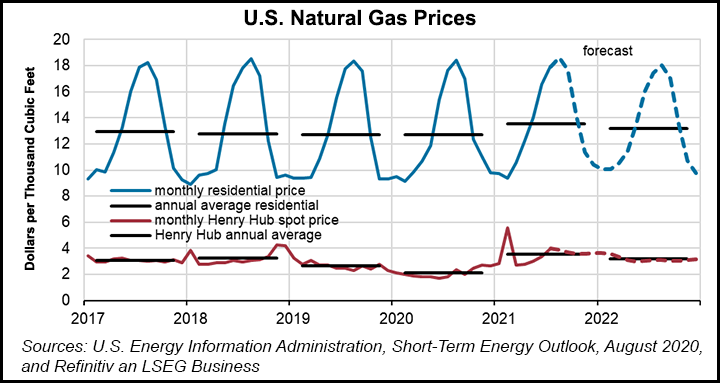 Research co-authored by Catherine Hausman, an associate professor at the University of Michigan, and economist Lucas Davis of the University of California, Berkeley, found a “thorny issue” in what they call a virtuous energy transition effort aimed at minimizing the emissions that cause climate change. As utilities shed natural gas customers, the researchers argued, they would still have to maintain legacy pipeline networks for years and pass along maintenance costs to a smaller pool of customers.

That is because the transition is expected to take 20 years or potentially far more. In the meantime, the higher bills are likely to affect low-income households disproportionately because adverse effects of societal shifts tend to be more pronounced in economically challenged corners of the country, the authors said in the report.

“Understanding the role of good public policy in natural gas markets is just so important,” said Hausman, who specializes in environmental and energy economics. “It’s an energy source that we rely on for basic needs like heating and cooking…It’s a sector that’s played a major role in the economy over the last decade, and at the same time, it’s contributing to climate change.”

Hausman and Davis examined data from growing and shrinking utilities between 1997-2019. They found that population changes drive shifts in customer bases. The greatest customer impacts are in cities with flat or declining populations, high poverty rates and large minority populations.

What’s more, their research found that most operational costs of utilities do not decrease despite a shrinking customer base. So those customers left behind — many already struggling financially — bear a higher cost.

“Putting more fixed costs into retail prices threatens” the remaining customers, the researchers wrote. “At the same time, higher retail prices for natural gas will also accelerate the transition away from natural gas, prompting further exits, and thus additional price increases” for those on the tail end of the transition decades from now.

Meanwhile, the researchers amplified what industry analysts argued appears inevitable: Natural gas is likely to play a prominent role in the energy mix through this decade before gradually declining in later years as development and adoption of renewable fuels gains momentum.

Raymond James & Associates Inc. analysts, for example, said in a recent report that gas consumption is not likely to peak for several years. The analysts estimated that natural gas accounted for 23% of overall global power generation in 2010 and 2020, and they expect it to hold at that level through at least 2025. They projected gas’ share would dip slightly to 22% by 2030.

“We believe that gas-fired generation has room to grow on an absolute basis — in the U.S. and globally — at least through 2025,” the Raymond James team, led by Pavel Molchanov, said in a report Monday. “Renewables are poised for much greater share gain than gas, and the energy transition megatrend is likely to set the stage for ‘peak gas’ in the long run. But, for now, it would be premature to write the obituary for gas.”

Driven by demand for American exports and strong domestic residential and commercial demand, the U.S. Energy Administration (EIA) said in its August Short-Term Energy Outlook, released Tuesday, that it expects natural gas consumption to rise in 2022. EIA said it expects U.S. consumption will average 82.5 Bcf/d in 2021 and climb to 83.8 Bcf/d next year.