A Harris Interactive poll found that 60% of North Carolina voters support the use of hydraulic fracturing (fracking) in their state, and 74% support the Tar Heel State moving forward with offshore oil and natural gas exploration and production. 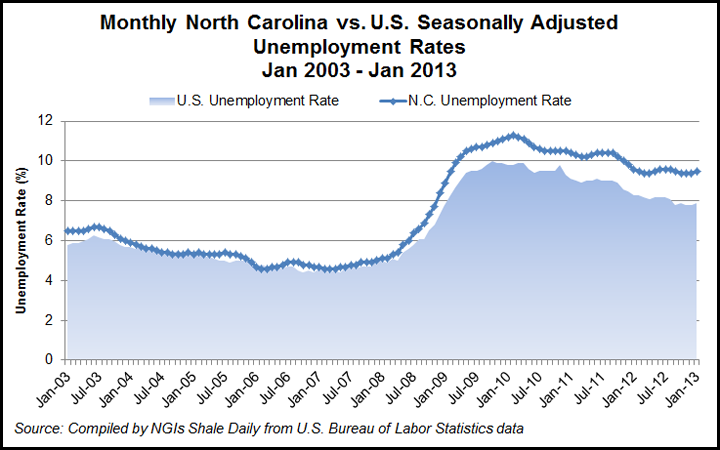 “North Carolina voters recognize that the U.S. has the opportunity to develop its own abundant supply of oil and natural gas for future energy needs,” said Bill Weatherspoon, executive director of the North Carolina Petroleum Council, an API division. “As a coastal state with both offshore potential and shale natural gas reserves, producing oil and natural gas in North Carolina has a long list of benefits, including tens of thousands of new jobs and billions of dollars in additional revenue to the state.”

According to the poll, fracking received 60% net support, with 33% of respondents saying they “strongly support” fracking and 27% saying they “somewhat support” the practice. Meanwhile, 22% of the net respondents said they opposed fracking, with 7% “somewhat opposed” and 15% “strongly opposed.” Of the remainder, 14% said they didn’t know or refused to answer the question, while 4% said they neither supported nor opposed fracking.

“[This] poll confirms strong support among voters for increasing domestic oil and natural gas production is the way forward for jobs and our economy,” said Weatherspoon. “North Carolina has the potential to become the energy capital of the southeast and both hydraulic fracturing and offshore oil and natural gas production are key opportunities for the future of our nation’s energy security and economic growth.”

The poll also found an overwhelming majority (91%) in agreement that increased domestic production of oil and natural gas would strengthen the energy security of the United States, while 93% agreed it could lead to more jobs in the U.S., 85% believed it would lower energy costs for consumers, and 91% said it would help stimulate the nation’s economy. Another 85% said they believe lease payments and royalty fees would benefit state and federal budgets.

Lawmakers in the North Carolina Senate passed SB 76, also known as the Domestic Energy Jobs Act, by a 39-7 vote on Feb. 27 (see Shale Daily, Feb. 28). It was then referred to the state House of Representatives, where it has since been referred to the Committee on Commerce and Job Development. If approved there, it would move on to the Environment and Finance committees.

SB 76 calls on the state’s Department of Environmental and Natural Resources to begin issuing permits for horizontal wells either on or after March 1, 2015, and for the state’s Mining and Energy Commission to study development of a comprehensive environmental permit for oil and gas exploration and development through fracking. It also encourages Democratic Gov. Bev Perdue to develop a regional interstate offshore energy policy compact with neighboring Virginia and South Carolina.

The Harris Interactive poll surveyed 601 registered voters between March 7 and 10 and has a margin of error of plus/minus 4.0%, at 95% confidence.