During the third quarter, Pioneer Natural Resources Co. turned in some landmark results in the Wolfcamp Shale as the company continued to de-risk the West Texas play. 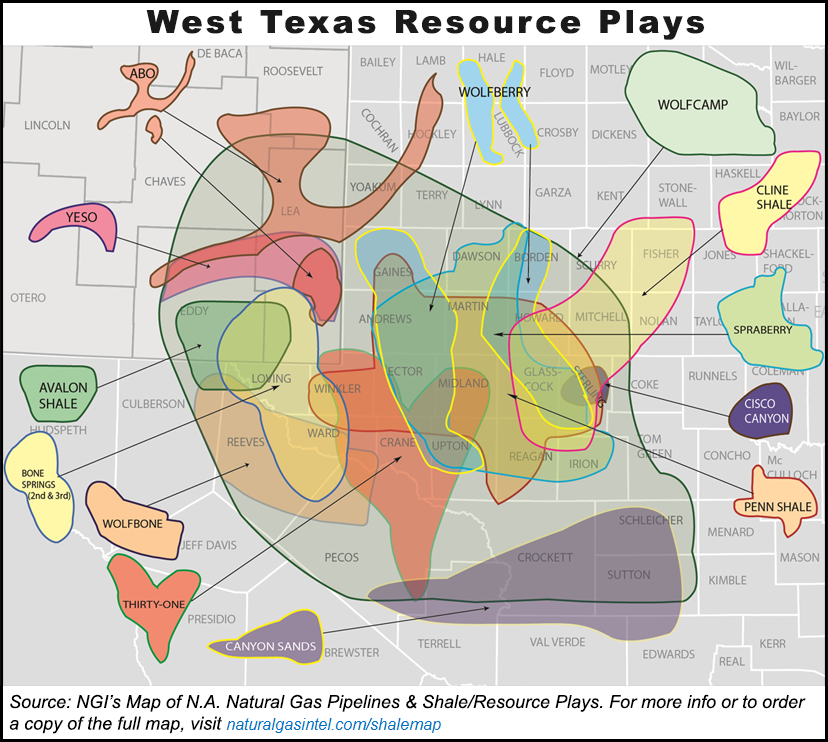 Pioneer drilled a horizontal Wolfcamp D well that had the highest initial production rate in the Midland Basin from any interval, said CEO Scott Sheffield. The company also achieved the highest initial production (IP) rate from the horizontal Wolfcamp B in the Midland Basin and extended the productivity of the Wolfcamp D a distance of 50 miles westward from recent industry activity in the interval.

“We also made significant steps forward in downspacing with the completion of a 12-well pilot in the southern Wolfcamp joint venture area and successfully reducing the spacing between wells in the liquids-rich area of the Eagle Ford Shale from 1,000 feet to 500 feet,” Sheffield said.

The Wolfcamp D is often referred to as the Cline Shale. “…[O]bviously, we’re very excited about the Wolfcamp D…” Sheffield said during a conference call Tuesday.

Pioneer is the largest acreage holder in the Spraberry Trend Area field, where the company believes it has more than 4.6 billion boe of estimated resource potential from horizontal drilling based on geologic data and drilling results to date. Of this amount, 3.0 billion boe is in the northern Spraberry/Wolfcamp portion of Pioneer’s acreage and 1.6 billion boe is in the southern Wolfcamp joint venture area.

The company is conducting a horizontal drilling program in 2013 and 2014 to appraise its northern Spraberry/Wolfcamp acreage. Pioneer expects to spud 34 wells during 2013, targeting six different stacked intervals across the northern acreage. The six stacked intervals across the company’s 600,000 prospective gross acres in the northern portion of its acreage position equates to more than 3 million prospective gross acres.

“Based on the strong production results from our initial Wolfcamp B and Wolfcamp A interval wells across our northern Midland Basin acreage, we believe that EURs for these wells will exceed 800,000 boe. We also believe that EURs for our initial Wolfcamp D interval wells will equal or exceed average industry Wolfcamp D results to date,” Sheffield said. “As a result of this strong performance, we expect to increase our rig count in the northern Spraberry/Wolfcamp Shale from five rigs currently to 10-plus rigs in 2014.”

In the Eagle Ford Shale, Pioneer added about 300 drilling locations in the liquids-rich portion of its acreage due to downspacing. The utilization of zipper fracture stimulation on three-well and four-well pads in the same areas resulted in a 20% increase in estimated ultimate recoveries (EUR), from 1 million boe to 1.2 million boe, for these wells.

Zipper fracks cause “a much higher density of event” to occur around the wellbore, said COO Timothy Dove. He was asked by an analyst whether this could also be true in the downspacing areas of the Wolfcamp. “It’s just too early to know,” Dove said. “But you would expect it just based on the fact that you would hopefully be improving the fracture network as well in the Wolfcamp.”

Further testing of downspacing to 300 feet between wells is under way in the liquids-rich areas of the Eagle Ford where 500-foot spacing was successful. “Early results are encouraging, and the potential exists to add 300 to 400 drilling locations,” the company said.