A rebound in natural gas forward prices that began last week kicked in high gear during the Jan. 10-16 period as frigid air finally returned to the United States after a month-and-a-half of exceptionally mild weather. 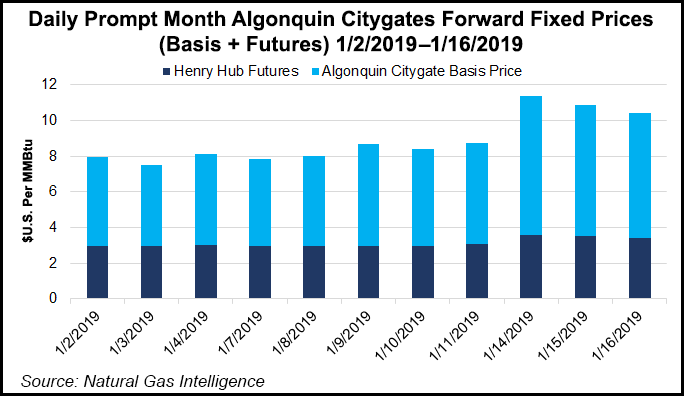 Prices for the summer and next winter also increased, but average gains were limited to less than 10 cents for those packages.

Overall market behavior moved in line with the Nymex futures curve, which saw February climb 42 cents to $3.384, and March move up 34 cents to $3.147, while the rest of the curve put up much smaller increases.

Weather forecasters had been predicting the return of cold this month for quite some time, but the timing of sustained cold continued to get pushed back. Overnight weather model guidance continued to converge as European guidance cooled significantly, while American guidance, which was previously far too cold, is still in the process of resuming its cold bias, according to Bespoke Weather Services.

“We have been leaning heavily on European guidance as of late” as American guidance has seemed overdone, Bespoke chief meteorologist Jacob Meisel said.

“Cold risks should increase into early February, and that is exactly what the model showed overnight” with a significant negative Eastern Pacific Oscillation and growing negative North Atlantic Oscillation that can deliver a sustained cold shot to end January that rivals what is expected to occur this weekend, when a frigid cold shot with rain and snow is forecast to push into the northern, central and southern United States.

“This remains likely to linger at least through Week 3 as we see solid staying power with any stronger cold air,” Meisel said.

Indeed, the DTN weather team said the winter chill will likely linger into March for areas east of the Rockies, with cold and snow slow to end. The shift to a much more frigid pattern comes as Arctic air from Canada is forecast to spread south more frequently for the rest of the winter, especially from North Carolina into the southeastern United States. Meanwhile, any milder breaks in the cold pattern are expected to be more limited during the rest of the winter, forecasters said Wednesday on a DTN-hosted webinar.

Based on the intensity of the coming cold, wellhead freeze-offs are expected to drop Lower 48 gas production by 2-3 Bcf/d, potentially more, according to NatGasWeather.

For its part, Genscape Inc. said current forecasts suggest that most of the western U.S. producing areas may avoid major freeze-off risks from the cold weather system descending from Canada. Western Canada is forecast to remain cold, likely prolonging freeze-offs already in place, and Northeast producing areas will start facing freeze-off risks early next week, followed by notable (and rather prolonged) risk around days 11-18. Still, it is likely current forecasts are bound to change being that far out, the firm said.

“Western Canada’s already been dealing with freeze-offs and will likely have to deal with a few more days this week. Another risk comes in days 11-15, particularly in [British Columbia]. Add into this the Westcoast McMahon outage, and BC volumes should remain pretty suppressed,” Genscape senior natural gas analyst Rick Margolin said.

Forecast temperatures for the Permian, Denver-Julesburg and San Juan basins don’t indicate much risk at the moment, while in the western Rockies, the Green River-Overthrust region could see some issues next weekend, but is otherwise forecast to be normal. The Bakken is expected to see a couple windows this weekend into early next week and the following week, although it’s important to acknowledge those systems are more resistant to freeze-offs than southern ones, Genscape said. There is also a small risk to Midcontinent producing areas around the same time.

While such supply losses are temporary, they can cause jarring daily withdrawals that drive market bears to the sidelines or bring bulls back to the driver’s seat, according to Mobius Risk Group. Countering pending bullish weather-driven demand, and potential supply losses, however, is the upcoming Martin Luther King, Jr. (MLK) holiday.

“Although MLK Day has not historically caused dramatic demand declines, it should be noted that as baseload demand has increased, so to have demand losses in Bcf/d terms. This dynamic was readily apparent during the most recent Christmas/New Years holiday,” Mobius analysts said.

Indeed, the natural gas market has been caught off guard the last couple of weeks by large misses on Energy Information Administration (EIA) storage reports. A more in line withdrawal reported on Thursday essentially confirmed that those misses were largely holiday noise, Bespoke said.

The EIA reported an 81 Bcf withdrawal for the week ending Jan. 11, on target with most estimates that clustered around a build between 76 and 82 Bcf.

The market continues to remain around 2 Bcf/d loose to the five-year average, with a dip in production offset by recent warmth, according to Bespoke. But “we are clearly trending tighter now that cold air is arriving. However, this balance confirms that weather will be the dominant price catalyst moving forward. Balances may be able to tighten enough to put 1 Tcf end-of-season in play if we max cold through the winter, but our estimate of 1.16 Tcf is more likely as cold should ease into March,” Meisel said.

By region, EIA reported a 34 Bcf withdrawal in the Midwest, with the next largest pull occurring in the East at 31 Bcf. The Pacific withdrew 8 Bcf for the week, while the Mountain region pulled 5 Bcf. In the South Central, a 6 Bcf withdrawal from nonsalt offset a 1 Bcf injection into salt stocks.

Going forward, the focus is squarely on just how long Arctic air can pour out of Canada and into the United States. NatGasWeather continues to expect conditions will linger through at least the first several days of February, with its “latest Climate Forecast System super ensemble data suggesting until Feb. 10.”

Steep gains were seen in forward curves across the country during the Jan. 10-16 period, but most paled in comparison to those in the Northeast as the second in a pair of snowstorms is expected to bring heavy snow and, in some cases, blizzard conditions, to the central Plains and Midwest from Friday into Saturday before impacting the mid-Atlantic and Northeast this weekend, according to AccuWeather.

“Temperatures from the central Plains to the Great Lakes and Ohio Valley will plummet from the 20s, 30s and 40s Fahrenheit during the storm to the single digits, teens and 20s immediately behind it,” AccuWeather senior meteorologist Alex Sosnowski said.

The Upper Midwest to the central Plains and western Great Lakes are forecast to be the first to experience the arrival of Arctic air on Saturday, followed by the Ohio Valley and central Appalachians on Sunday and the Northeast on Sunday night. AccuWeather RealFeel Temperatures are forecast to be no higher than the single digits in parts of the Tennessee River Valley and lower Ohio River Valley on Sunday and will hold in the teens below zero across most of the Midwest and Great Lakes region.

And for football fans heading to Arrowhead Stadium in Kansas City for playoff football action Sunday night, temperatures are expected to fall through the single digits with RealFeel Temperatures below zero, according to AccuWeather.

“Northerly winds are likely to gust between 30 and 45 mph at the height of the storm and in its immediate wake, spreading from west to east during Saturday and Sunday,” Sosnowski added.

Freezing air is also expected to penetrate into the Deep South, reaching the central Gulf Coast by Saturday night and northern and central Florida by Sunday night.

The core of the bitterly cold air is forecast to shift eastward into the mid-Atlantic and Northeast on Sunday night and Monday, where temperatures may reach no higher than the teens in the Interstate 95 corridor and single digits across much of New England.

Solid gains of well more than $1 were seen across the Transcontinental Gas Pipe Line, while New England also strengthened considerably. Algonquin Citygate February rocketed $1.98 higher to $10.388, and March tacked on 50 cents to $6.512. The summer was up 11 cents to $2.89, and next winter was up 8 cents to $7.79.

Algonquin Gas Transmission on Tuesday experienced an unplanned outage at its Burrillville, RI, compressor station, which will reduce operational capacity from 998 MMcf/d to 914 MMcf/d for the duration of the outage. This would present a cut of 171 MMcf/d compared to the 30-day average of implied flows (scheduled capacity + no notice nominations), and up to 428 MMcf/d compared to the 30-day max, according to Genscape.

While operator Enbridge Inc. usually fixes these unplanned outages relatively quickly, “it will severely constrain downstream flows and increase chances for a blowout should it remain through next week’s forecasted cold spell that is expected to blast the Eastern two-thirds of the county,” Genscape natural gas analyst Josh Garcia said.

There was no estimated return to service.

In the Permian, Waha prompt-month prices finally moved back to the $2 mark, but just barely. February jumped 52 cents to $2.01, and March increased 38 cents to $1.45, Forward Look data show. Summer prices averaged $1.30 after climbing 9 cents, and next winter priced at $2.17 after inching up 3 cents.

Meanwhile, Rockies prices were notably stronger than benchmark Henry Hub as Northwest Pipeline-Sumas February jumped 82 cents from Jan. 10-16 to reach $3.845 and March climbed 38 cents to $2.88. Both summer and next winter rose 7 cents apiece, landing at $2.08 and $3.03, respectively.