As spot prices in the region have languished near or below zero, natural gas flaring and venting in the Permian Basin has climbed to an all-time high, according to new estimates published this week by Rystad Energy. 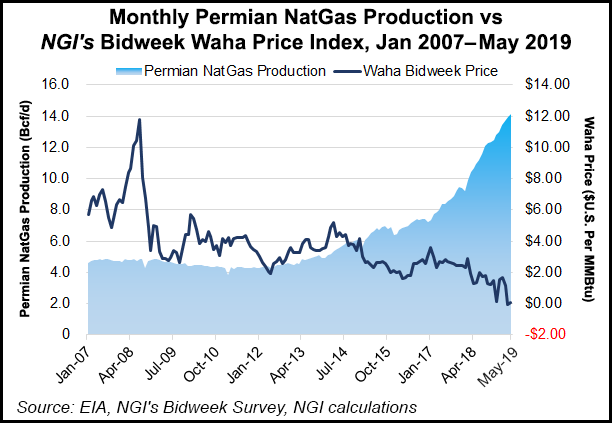 By Rystad’s count, flaring and venting volumes in Permian producing areas of West Texas and southeastern New Mexico set an all-time record record during the first quarter, averaging as much as 661 MMcf/d.

“This widespread waste of a valuable commodity is the result of persistent infrastructure challenges, a lack of sufficient takeaway capacity and an unexpected outage on a key pipeline in the area,” Rystad concluded.

As a point of comparison, Shell’s Mars-Ursa complex, the most productive gas facility in the Gulf of Mexico, currently produces around 260-270 MMcf/d of gross natural gas, only about 40% of the gas flared and vented in the Permian each day, according to Rystad.

The Permian Basin is by far the most active play in the U.S. onshore, and drilling activity there is largely driven by liquids economics. Associated gas output in the region has outrun the available takeaway, and even seemingly minor pipeline restrictions have corresponded with big downward spot price swings for natural gas.

Earlier this year, the Permian accounted for the lowest natural gas spot prices NGI has ever recorded as the region’s liquids economics flipped gas from a commodity to a waste product. Even with pipes full and flaring at record levels, sellers have had to pay as much as $9.000/MMBtu to find an offtaker for their associated gas.

For the most part, Permian prices haven’t been quite so extreme over the past couple months. Still, negative day-ahead trades have been common, and there have been few signs that the underlying conditions have materially improved for the region’s sellers. It could take the start-up of Kinder Morgan Inc.’s Gulf Coast Express (GCX) pipeline — slated for October — to relieve the downward price pressure in the region, analysts have said.

That means flaring and venting in the Permian will likely continue at record-levels until then, according to Rystad.

“We anticipate that basin-wide flaring will stay above 650 MMcf/d before the Gulf Coast Express pipeline comes online in the second half of 2019,” said Artem Abramov, Rystad’s head of shale research.

Rystad’s estimates are based on data gathered from the Texas Railroad Commission and the New Mexico Oil Conservation Division. Due to reporting delays, the firm said it has developed a model to estimate flared and vented volumes yet to be reported.

Natural gas flaring and venting in the United States is concentrated in the Permian and in the Bakken Shale, with the two regions accounting for a combined 1.15 Bcf/d of wasted volumes in the first quarter, according to Rystad’s estimates. That would be enough to supply the yearly demand of some nations, including Israel, Colombia and Romania.

“The largest operators in the Permian Basin flared on average 5.1% of operated gross gas production in the fourth quarter of 2018 and the first quarter of 2019,” Rystad said. “However, there are significant regional differences.”

Gross Permian gas production topped 13 Bcf/d in December and is approaching 14 Bcf/d currently, according to Rystad.

Permian producers could be in for more price pain in the months ahead, but there have been some glimmers of hope as of late. One potential uplift for Permian prices could come from the start-up of new pipeline capacity south of the border with Mexico, according to RBN Energy LLC analyst Jason Ferguson.

“Gas exports to Mexico from West Texas have been thwarted by construction delays for new pipeline capacity on the Mexico side,” Ferguson said. “Well, that may be changing. It appears that the buildout of gas pipelines in Northwest Mexico has progressed recently, as exports from Waha to the U.S.-Mexico border recently topped 0.5 Bcf/d…The gains appear to be tied to the impending completion of Fermaca’s pipeline network within Mexico.

Depending on the timeline for completing the Fermaca pipelines, exports from Waha to Mexico could climb to more than 600 MMcf/d this month, potentially reaching more than 800 MMcf/d by the fourth quarter, according to Ferguson.

Meanwhile, whispers that the GCX pipeline could enter service ahead of schedule hint at another possible boost for Permian prices, the analyst said.

“While the official start date for GCX is October of this year, market buzz continues to indicate the potential for some type of interim service before then,” Ferguson said. “While we have no way of knowing if this is the case, we have at least been able to verify that it’s technically feasible to move some volumes on the pipeline before all of the compression has been completed.

“This is possible because the pipeline will be receiving gas at high pressures from Permian processing plants, thereby facilitating flows from West Texas to the Agua Dulce Hub even without the additional compression. While the amounts that could be achieved from such a setup would vary based on the pressure at the different processing plant receipt meters, we’ve heard that amounts near 0.5 Bcf/d would be technically feasible if gas is received at around 1,000 pounds per square inch gauge (psig) at the plant and delivered at 800 psig at Agua Dulce.”