Volatile commodity prices and takeaway constraints cut into the bottom line for many Permian Basin independents during the second quarter, but squeezing every penny from every dollar possible proved to be the savior for many. 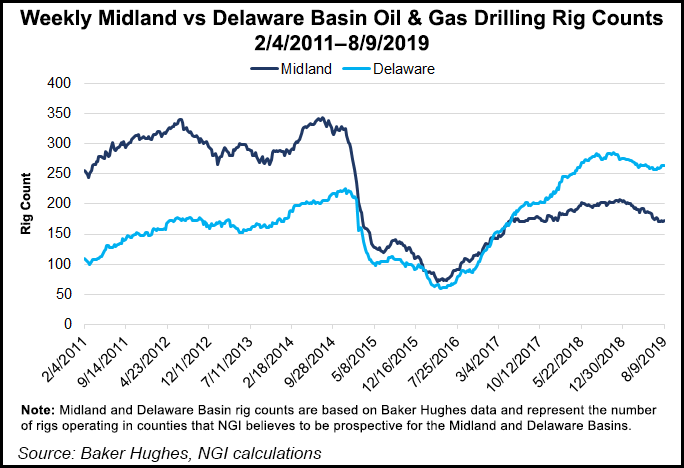 Time is indeed money, said Diamondback Energy Inc. CEO Travis Stice. During the second quarter conference call, Stice was asked to explain what was in the secret sauce that has helped the pure-play control costs.

“We get that question coming from a lot of different angles over different quarters, and I’ll tell you it’s not just one thing,” Stice said. “It’s really a combination of a thousand things.”

For example, Diamondback’s drilling unit cut seven-tenths of a minute off the time it takes a crew to screw pipe together for every well drilled during the quarter. On average, the operator was running 20 rigs.

“That’s $1/foot per well, five times 20 rigs,” Stice said. “It’s that level of scrutiny across our costs spend that I think truly differentiates our operations organization.”

The oil and gas business “is not that complicated,” he said. “It’s converting rock into cash flow. And you’ve got to measure every facet of that conversion process to ensure you’re the most efficient…”

Diamondback last year completed close to $10 billion of acquisitions including its $9.2 billion combination with Permian competitor Energen Corp. and a $1.2 billion purchase from Ajax Resources LLC of Midland sub-basin acreage.

“It’s hard for me to believe,” Stice said, that full-well costs in the Wolfcamp formation of the Permian “are lower on a combined basis with Energen than they were on the Diamondback standalone basis a year ago.”

Competing in the Permian is not easy. It takes deep pockets, as ExxonMobil Corp. and Chevron Corp. demonstrated in their 2Q2019 results, as well as astute planning about when to build takeaway or secure capacity agreements. There’s also a measure of the unknown about where the market is heading for West Texas Intermediate oil and Waha natural gas.

For Diamondback’s Midland and northern Delaware gas production, “we’re going to look to hedge and protect ourselves that way,” Stice said. “I think for us, with gas being such a small percentage of our production and revenue, we’re more focused on hedging that price at a decent realized price and not having to deal with the negative realizations we’ve had to deal with this quarter.”

In the Delaware, Diamondback saw a 16% cost reduction in its drilling/foot during the quarter, “so that’s where we’re seeing the biggest change and optimization rate,” Hollis said. “…The great thing is everything that we’re learning and doing, and changing in Midland is applicable in Delaware and vice versa. So those two teams are fully integrated as well.”

Regarding its initiatives to ensure takeaway for natural gas and natural gas liquids (NGL), Stice said Diamondback would look to hedges for protection.

“I think for us with gas being such a small percentage of our production and revenue, we’re more focused on hedging that price at a decent realized price and not having to deal with the negative realizations we’ve had to deal with this quarter.”

Pioneer Natural Resources Co. has reduced its capital guidance by $150 million; it also reduced infrastructure cost spending by about $50 million.

CEO Scott Sheffield remains bullish on the Permian, but not the entire play. The Midland sub-basin, where Pioneer spends most of its capital, is increasingly where the future is at, he told analysts during the quarterly call.

The Permian has three sub-basins — the Midland, the Delaware and the Central Basin Platform — but as the Delaware today is receiving most of the attention, “Tier 1 acreage is being exhausted at a very quick rate,” Sheffield said.

In his view of independent analyst research, Sheffield expects the Delaware to peak around 2024. “Because of the aggressive drilling and downspacing, companies are essentially running out of inventory,” he said. Not so in the Midland, which he doesn’texpect to peak before the mid-2030s.

“I’m still convinced the Permian will reach 8 million b/d at a much slower pace with the Midland Basin as the only growing basin in the U.S. past 2025.”

Pioneer’s realized oil price was $60/bbl, which included a significant uplift related to the firm transportation contracts that move supply to the Gulf Coast where it can receive Brent-related pricing.

“This increased our price by over $4 for oil for the quarter and…provided about $81 million of incremental cash flow or $230 million year-to-date through June,” Pioneer CFO Richard Dealey said. “Based on our forecasted prices for the third quarter, we are expecting an uplift of about $25-75 million in the third quarter from the ability to move our oil and export it on the Gulf Coast.”

Between April and June Pioneer moved about 90% of its oil, roughly 200,000 b/d, to the Gulf Coast, with 80% total exported. Sixty percent of the exported total was sent to Asia and 40% to Europe, Dealey said. “Longer term, our firm transportation commitments increase to about 250,000 b/d late into 2020, which is consistent with our forecasted production growth.”

Pioneer attempts to move all of its supply to higher-priced markets. During the second quarter, about 60% of its natural gas was transported west and priced at the SoCalGas index, Dealey noted, which provided about $20-25 million of incremental cash flow and improved price realizations relative to other Permian players.

“Once Gulf Coast Express comes on in the fourth quarter, we will move about 300 MMcf/d to the Gulf Coast and price that on a Houston Ship Channel price index. And at that point, virtually all of our gas will be sold outside of the Permian Basin.”

Sheffield is pessimistic that oil will increase above $55/bbl for the next three years and result in a “significant pullback in Permian growth. You’ll probably move toward no growth for most people” without solid balance sheets.

“We have cash in the balance sheet, and we can drill through the cycle if we choose,” he said. So we’re sticking with our mid-teens growth long term, adding two to three rigs per year…We haven’t changed our opinion at this point in time even if we go to the mid-$50s.”

Laredo Petroleum Inc. proved during the second quarter that there’s more than one way to generate returns when prices are stagnant and takeaway is constrained.

“We changed our development strategy, cut costs from every facet of the business and completely revamped the senior leadership team with all positions but one filled by long-term employees,” CEO Randy Foutch told analysts during the quarterly call.

“Driven by these improvements, we are increasing our oil and total production growth estimates for full-year 2019, while maintaining our capital budget and increasing our cash flow generation estimates from being cash flow neutral for the year to generating $30 million in free cash flow for the full-year,” Foutch said.

“We are achieving everything we expected when we embarked on this transformation and have greatly surpassed our initial projections, which we laid out both in November when we announced our move to wider spacing, and then with our initial 2019 budget in mid-February.”

It was a similar story at Parsley Energy Inc., CEO Matt Gallagher told analysts during the quarterly call.

“Actions continue to speak much louder than words in this challenging market environment,” he said. The company’s “returns-focused 2019 action plan was designed to take a step forward to sustainable free cash flow while delivering a step-change improvement in capital efficiency…We are delivering on these initiatives…and are positioned to cross the threshold to sustainable free cash flow for the remainder of the year and beyond.”

While it increases its production guidance, Parsley has tightened its capital expenditures (capex) for the year and lowered unit cost forecasts. However, “I also want to reiterate that six months do not make one year, and we will remain just as focused on execution in the second half of 2019 and beyond.”

For capex, savings are better than expected, “thanks largely to continued operational efficiency gains, cycle time improvements and deflationary trends on some consumables like sand and steel,” Gallagher said.

In its move toward sustainable cash flow, “we are right at that inflection point, and we currently expect to generate free cash flow for the remainder of the year quarterly.”

“However, our pathway to free cash flow is not meant to simply be a short excursion. ”Sustainable’ is the operative word,” with a goal to build the cash profile over time.”

Operations chief David Dell’Osso said an 8% sequential improvement in drilled footage/day per rig enabled Parsley to drop to 11 from 12 rigs in mid-June.

“For the remainder of the year, we expect to run a maximum of 11 rigs and three to four fracture crews while targeting consistent capital investment pace. Managing our development schedule in a way that minimizes friction costs and allows us to carry operational momentum into next year continues to be a key priority for the team.”

Centennial Resource Development Inc. COO Sean Smith during the quarterly call with analysts said natural gas takeaway from the Permian should improve later this year, but “we would not be surprised to see the basin return to being oversupplied in mid-2020,” putting pressure once again on Waha prices.

Regarding oil supply, CEO Mark Papa offered a macro outlook. While the global picture “is bullish…it’s already apparent to me that 2020 total U.S. oil growth will be considerably less than the 1.2 million b/d year/year that most people are currently forecasting. The big question is global demand, and nobody including me currently has a clear picture of either 2019 or likely 2020 year-over-year demand growth.

“I personally believe there’s an equal probability that 2020 oil prices could be $50 or $70.” For Centennial, the strategy is to raise volume targets while lowering unit costs and remain within its original spending budget.

“I still think we could see an upside surprise in the oil market tightening in 2020, and we want to at least have the potential to take advantage of that…I mean we could run five rigs, we could run as many as seven rigs in 2020, and we probably will not make that decision until January of 2020.”