Lifted by revenue pulled from the Permian Basin in West Texas, the state’s oil and natural gas industry paid $13.9 billion in taxes and royalties in fiscal 2020, or around $38 million/day,  according to a top industry group. 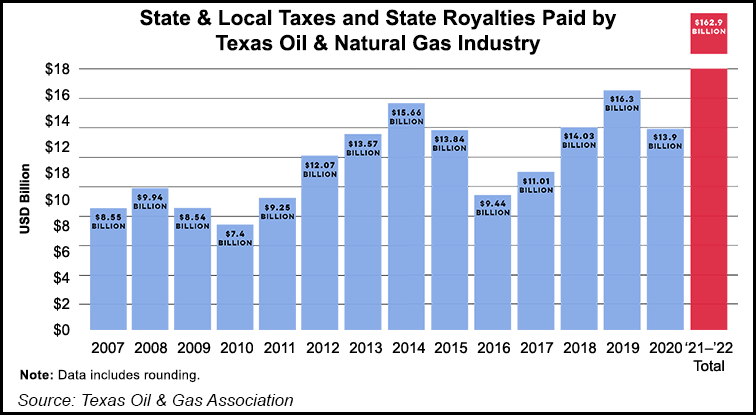 “Even in an extremely difficult year, the Texas oil and natural gas industry continues to contribute tremendously to state and local tax coffers, while fortifying our energy security and leading the way in innovation and investment that is advancing environmental progress,” said President Todd Staples. “The ongoing recovery of the oil and natural gas industry is essential to the state’s continuing economic improvement.”

The pandemic has reinforced that oil and natural gas are “essential and irreplaceable,” he said.

“While oil prices plummeted in the wake of the pandemic, the need for products made from oil and natural gas skyrocketed. Nearly every in-demand product we need to be safe, to save lives and to power our economy — from face shields and hand sanitizers to high-speed internet connections and computers — is made possible by oil and natural gas.”

The tax and royalty revenue supports services through the state’s Economic Stabilization Fund, otherwise known as the Rainy Day Fund, as well as the Permanent School Fund (PSF) and the Permanent University Fund (PUF). The three are funded almost exclusively with taxes and royalties paid by the oil and gas industry.

Last year 99% of the oil and natural gas royalties were deposited into the PSF and the PUF for public education. The PUF received $771 million and the PSF received $942 million, while the Rainy Day Fund received $1.657 billion.

“Some counties and ISDs saw dramatic increases in oil and natural gas property tax revenue in 2020,” which was particularly notable in West Texas, the center of Permian activity in the state.

Pecos-Barstow-Toyah ISD in West Texas ranked No. 1, receiving $167.6 million from mineral properties, which was 53% higher year/year. Meanwhile, Reeves County, also in West Texas, ranked No. 1 with $74.5 million paid in oil and natural gas property taxes — an 80% increase from fiscal 2019.

In addition to its economic impact, the oil and natural gas industry has taken the lead in developing environmental solutions that are working to reduce emissions and flaring, Staples noted.

“All this, while the United States enjoys more energy security than ever before and American-made energy is powering economic prosperity and environmental improvements around the world,” said Staples. “This progress — and ways to build on it — must be part of more rational discussions about the future of our energy, the environment and the economy.”

Staples also detailed a three-part policy Roadmap to Recovery for the Texas Legislature “to drive greater investment in all aspects of the oil and natural gas industry that will power Texas’ economic recovery and provide critical state and local tax revenue every Texan needs.”

TXOGA is urging lawmakers to ensure there is “continued, responsible development” of essential energy infrastructure needed to meet the demands of a growing population.

“Every Texan relies on electric transmission lines, roads, high-speed Internet, drainage and flood control and pipelines for water, oil, natural gas and transportation fuels, and the expansion of this infrastructure is essential to the state’s continued growth and success,” Staples said.

Staples said TXOGA also is urging state lawmakers to embrace “smart tax policy,” including renewing the economic development program known as Chapter 313. The program is designed to attract investments and jobs to Texas.

In addition, TXOGA asked lawmakers to maintain a commitment to “science-based policy and rational discussions” on environmental issues.

“Smart policies,” said Staples, “will encourage investment in and innovation by the oil and natural gas industry and will power us toward the cleaner, stronger, and better future every Texan deserves.”